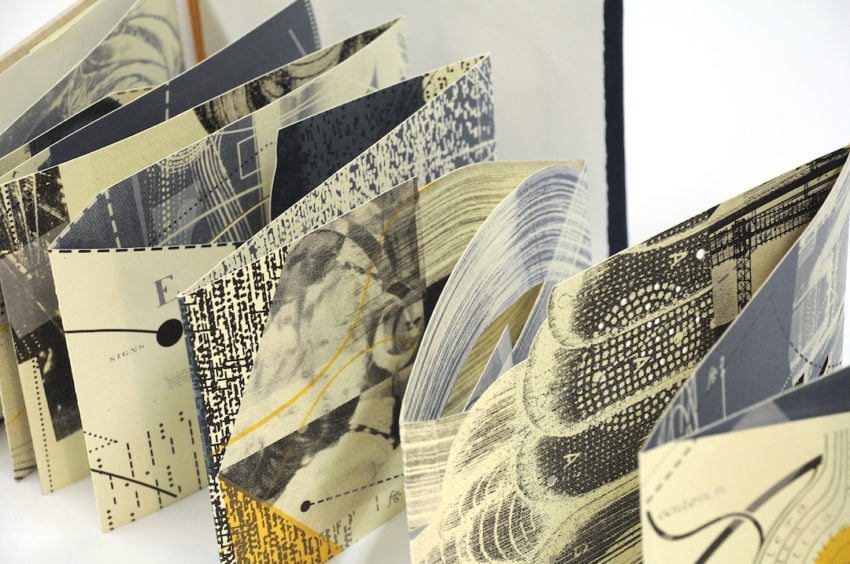 Alan Pocaro is an Illinois based artist and writer, who teaches as Associate Professor of Art + Design at Eastern Illinois University. Pocaro’s screenprint based artwork incorporates his various roles, as art-critic and teacher.  Pocaro collages together text, shape and color, to create graphic books and images that utilize historical art iconography. In a recent artist statement he explained his work saying, “I describe my work as a series of scenes that chart a nameless place. Part narrative, part history lesson, part Midwestern landscape at dusk. These images arise from the gamut of everyday experience, embracing the joys and sorrows of an all too fragile existence. His residency at Zea Mays in 2017 lasted several weeks. Pocaro used his time in the studio to acquire new printmaking skills, push himself to experiment, and immerse himself in the surrounding town. 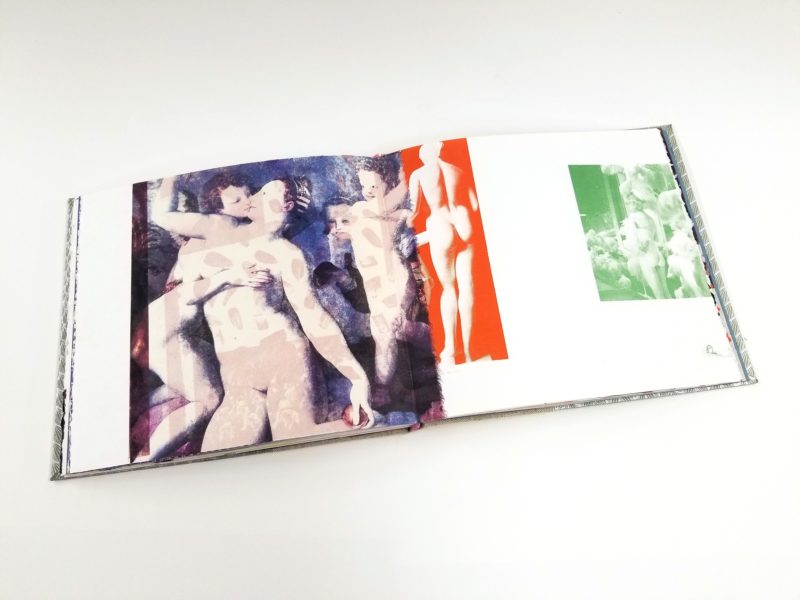 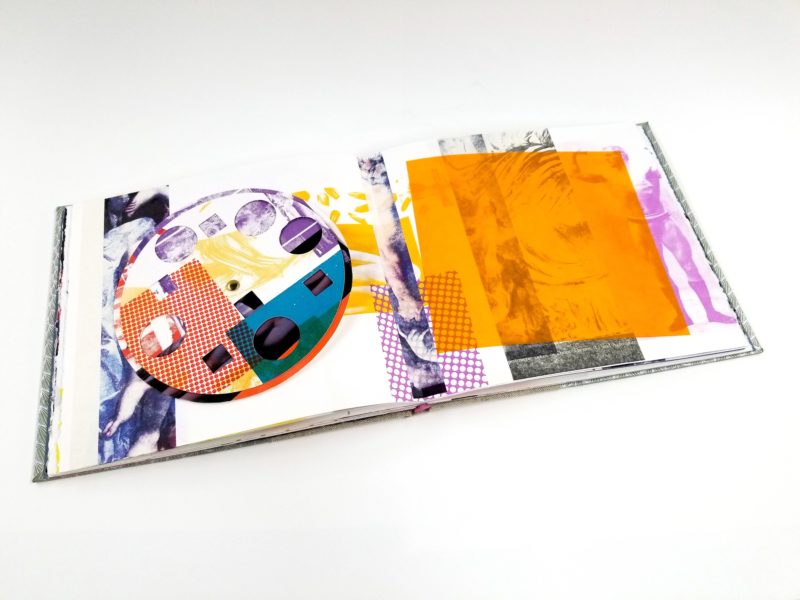 Pocaro’s residency happened while he was finishing up several consecutive years spent running the printshop at Eastern Illinois University, where he had freshly converted the space into a non-toxic studio. Pocaro planned to add to his visual toolbox while at Zea Mays, and to continue ongoing experiments to transform the possibilities of silkscreen. He says, “As I recall, I was in the midst of some experiments with screenprinting. I was interested in making my screenprints look like lithographs, or etchings, anything but screenprints!” He hit the ground running as soon as he arrived, compiling himself a collection of visuals to draw from. “I started with a lot of monotypes. I need to quickly fill a space I’m working in to get the vibes’ going and to have something visual to respond to. So I just started cranking out color monotypes like crazy. In retrospect, they were probably pretty lousy, but they got me going. Then I switched over to doing a bunch of linocuts. I also brought a bunch of copper with me to etch. Truth be told, I never much liked etching so I thought this would be a good experience, to kind of force myself into it.” 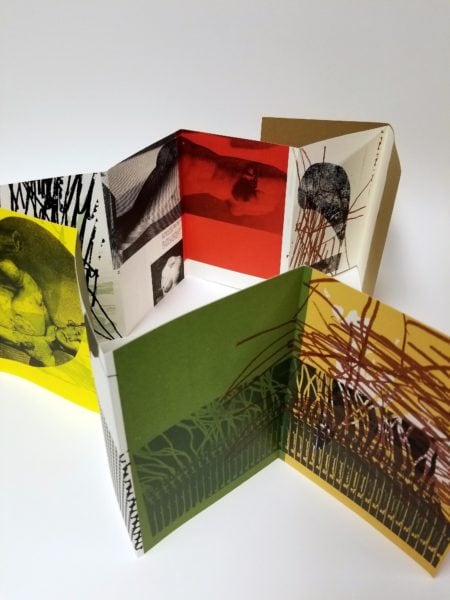 Pocaro explains his charged creative process during the residency, “I’m a worker, and I would get up early, have coffee, and just crank away in that studio. Usually, break for dinner and hit the studio for a few more hours in the evening. I loved that. I’d sit in that cozy chair, usually with a Ballantine or Narraganset in hand, and just look over what I had done during the day. I don’t know a ton of printmakers who have a press in their basement, so to be able to keep working in the evening was a real treat.” Pocaro also relished the time he spent wandering and eating in the surrounding area. Walking, or riding a borrowed bike, he would soak in the town, often visiting the brewery across the street. He welcomed the change of landscape and the impact it had on his work.  “I was really enamored with the space of Florence and Northampton and the way the roads just twist and turn. Here in Illinois, everything is on a grid, not much surprise there. Also, that bridge nearby, over Clement St. I think. The trusses showed up in a bunch of my prints. After two weeks, I had a belly full of good Mexican food (Mission Cantina) one crap etching, and a load of screenprints, monotypes, and linocuts.”

Pocaro felt that things really came together at the end of his two weeks, saying he wishes he could return again for three or four to continue the momentum. He notes that he learned about his own practice, and that new concepts changed his perspective. “I can say that being there, my first, and to this day, only residency, made me very aware of the impact that space has on my work. It was also good for me to work in a different environment than I’m used to, and to negotiate that and incorporate it into my work. In retrospect, I remember Liz working on a book and I was just captivated by its beauty and delicacy and also that it didn’t conform to my expectations of what a ‘book’ was. Since that time, I’ve fully embraced book arts as the lynchpin of my creative practice, and I have often thought that one of the subconscious turning points in that was being at Zea Mays.” Pocaro also says that the technical details he learned at his residency, like blanket layering, and non-toxic material alternatives were practices he brought back to his studio. “I also learned about a compound called estasol, and an alternative relief medium called sintra. The sintra was clutch because a week after I got back to Illinois, I had to teach a graduate intensive for 8 days and then an art camp for high school kids. I had no budget but was still on such a high from the residency that I wanted the kids to make some really cool work. Enter sintra.” 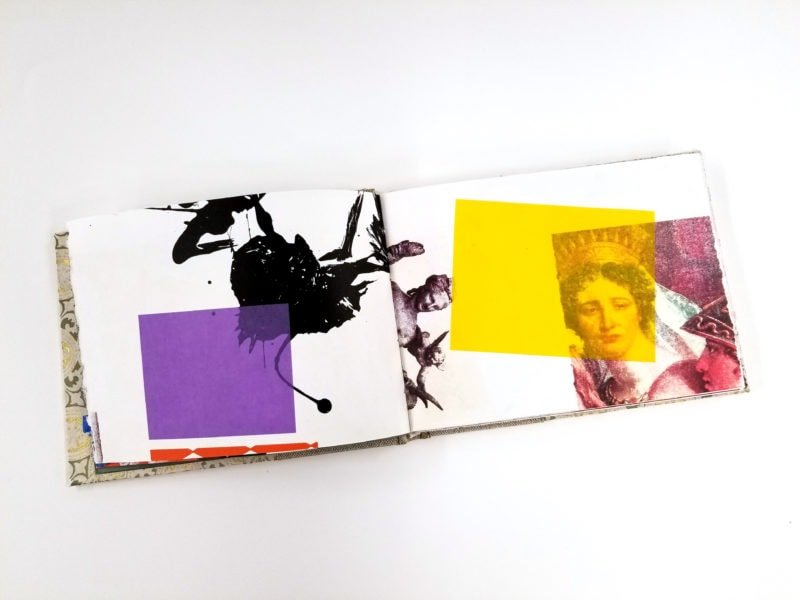 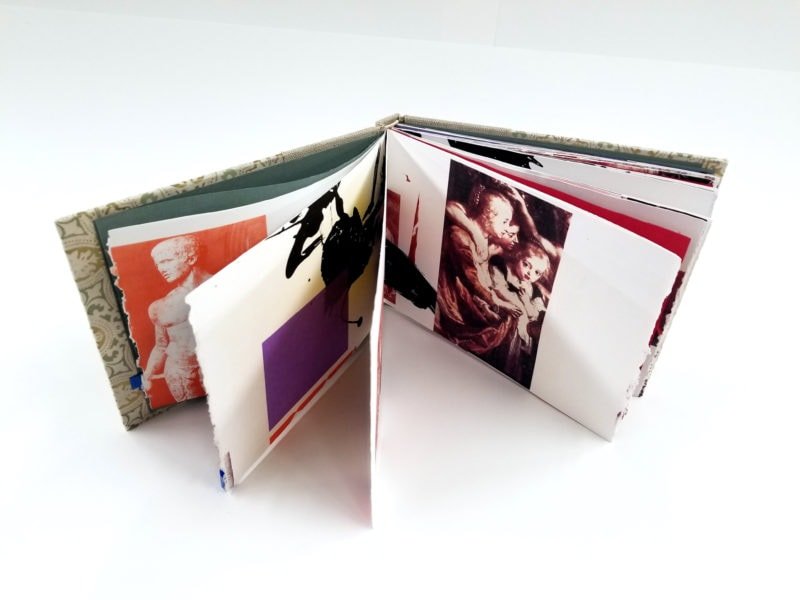 Pocaro says his day to day life during the pandemic feels like it’s changed very little. “If anything, I’ve found I have more time to work in the studio, and I’m a better baker and can make cracking pizzas that are pretty close to Neapolitan style. In other ways, it’s sucked. I was awarded tenure this year, but it was pretty anticlimactic because everything was shut down. All my travel plans got nixed including two weeks at the Paper and Bookmaking Intensive in Saugatuck.” His role as an art critic has certainly changed, with the lack of in-person gallery openings. “I’m also used to writing about art at least as much as I make it, and that has been a big challenge. I don’t get off on ‘virtual exhibitions’ and so I won’t write about them. That basically meant that between March and August, with pretty much every Chicago gallery and museum closed, I did no art writing at all. That was weird.” Pocaro still looks at his situation with optimism. He says that he’s lucky to be healthy, have those around him healthy, and the ability to make art. With these things in place, he says he hardly has reason to complain.

View more of Alan Pocaro’s writing and art on his website https://www.alanpocaro.com/