2nd in a series about young mother/printmakers

I first met Angela when she was an intern at Zea Mays. She was many months pregnant with her first child, Matilda, now a creative and curious five-year old. Her second child Ezra is now two.

Angela’s exhibit If You Need Me, I Will Be Over Here,an installation of soft stuffed room-defining and space-defining structures at the Easthampton City Arts gallery in Old Town Hall was my first experience with her art. Not long after was an open studio at Easthampton’s Riverside Industries, a workshop for developmentally disabled adults, where she had volunteered to partner in their art therapy program with one of the client employees, David. Conversations with David spurred their shared creativity making art across mediums; drawings, paintings, paper dolls, shadow boxes, collages and puppets. Their conversations broached many topics, the seasons, birdhouses, cartoon characters and yard sales, but particularly snow! Her work with David culminated in a body of work they showed in the lobby of 1 Cottage St., Sugar Snow, Snowman. 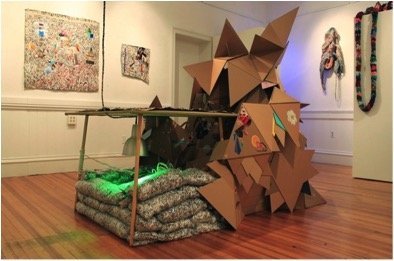 If You Need Me, I Will Be Over Here

I can picture Angela working a similar process with her children and the art they make together, guiding the process with understanding spaces and imagining their surroundings. I am not surprised when I see Instagram posts of Angela and her children covered in mud or smiling through their painted faces. 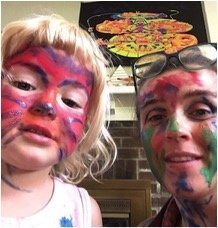 Angela’s work pre-motherhood was about the real space she occupies and the relationships she builds with people and things around her. Anticipating art making as a new mother, she realized making installation pieces would be too time and space consuming. She would not have the resources to pull off that type of work. Her work now takes her to a different spot, smaller and more self-contained, two-dimensional work, but still about the place she inhabits and the imaginary journeys she takes. The intuitive narrative in this work is rich with symbols, including eyes and knot marks in wood that resemble eyes!

Sculpture making set aside, she is now making etchings, monotypes and fabric books, neatly stitched, both by hand and machine. Angela is an experienced seamstress (and knitter too!)  Despite this newer work, she has continued showing her older sculptural installations in both solo and group shows.

As a Zea Mays intern, Angela got to assist Kate Jenkins in her watercolor monotype workshop and loved the look of this process and the layering that takes place. I asked Angela about the eyes that appear in this work, including her 2019 Flat File portfolio. Where did they come from? “In a dark time, the eye begins to see,” – Theodore Roethke poem In a Dark Time. She heard a snippet in the car between her daughter Matilda talking to her. She felt it deeply. This was around the time Trump was elected and she imagined the eyes in her prints were about witnessing and a “hope for clarity”. 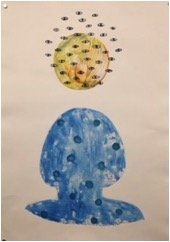 A few years ago I participated in Angela’s crowdfunding campaign for her Assets for Artists residency at Mass MoCA. My gift was a soft sewn figure Angela calls a “chorus member”, definitely a bit freakish, maybe scary, very colorful and definitely unique. It graces a bureau in my house. Note her eyes. What is the chorus singing? 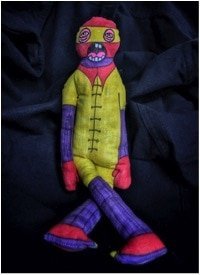 Having pre-school children, Angela’s studio time can be sporadic. She has worked to develop projects which not only fit within her time constraints, but also are about marked periods of time. Her books and series of prints, express time, real and imaginary; Calendar I Have Been Keeping, a salt dough piece a day, marking each day of the year, remembering her Nana’s life and a fabric book marking Angela’s 35th birthday year.

Despite her time limitations, Angela has volunteered in her community for the Easthampton Cultural Council and the Easthampton Family Center and now is one of our much appreciated Zea Mays studio monitors.

In our conversations and emails Angela never alluded to a conflict between motherhood and artist. “There are spaces in my art making,”she says, “that are very separate from being a mother and how I parent and vice versa. But I do feel there are times when they are the same or I call upon the skills I have learned from one role to enact the other role.” Angela credits the support of her husband Josh, also an artist, and friends and extended family.

Angela took a single printmaking class in both her BFA and MFA work. She was hesitant to pursue further because she was worried about the chemicals, knew she had a tendency to not be too “exact”, and concerned about where after school she would be able to find a studio. After moving back to the Valley she discovered Zea Mays and took Annie Bissett’s Moku Hanga class and Louise Kohrman’s Etching class. “I love the community and learning the processes. I appreciate Liz’s openness to experiments and her determination to keep pushing ZMP to ever improving its “greenness” and environmental responsibility.”

Angela like other mothers-of-young-children artists at Zea Mays shows remarkable dedication, wisdom in her self-awareness and clarity of purpose that is inspiring to her studio partners. I am fortunate to work besides printmakers such such as Angela, whose work has such depth, meaning, beauty and skill.