Kate Baillies is a multidisciplinary artist based in the city Calgary, in Alberta, Canada. Baillies has spent four residencies at Zea Mays, ranging from two weeks to a month, and had a fifth residency scheduled for 2020, which had to be postponed. Looking back at her long history of working at Zea Mays she recalls her initial intention for her first residency, “I approached my first residency with the idea to learn the non-toxic processes taught at the studio and to use these techniques to explore hand drawn imagery in a methodical way. I’ve continued this approach within each residency, finding it both productive and broadening in creative scope.” During this first residency, she was able to learn as well as produce and finish new work. She says, “(I) learned non-toxic techniques which would allow me to draw directly on the plate and add tone to drawings.  I finished one series of work, and two editions.”

During her second residency Baillies expanded her repertoire of printmaking techniques, using them in an artist book. She discovered photopolymer plate printing, as well as spit bite etching. She explains, “I applied these and other non-toxic etching techniques in etchings for an artist book that were included in The Print(ed) Word Project.  My completed book, ‘ISOBARS: how origami hysterics blush your dutch hat/boat’ is a creative response to poems by Weyman Chan. The work was started at Zea Mays and finished in my home studio, with additional photopolymer plates made from my wash drawings by Nancy Diessner (Dog’s Eye Print  Studio).” 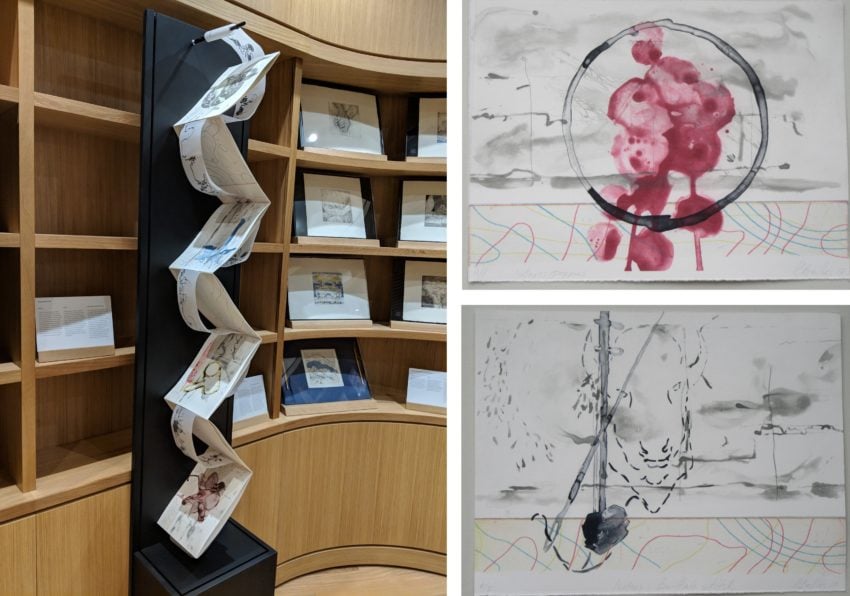 During her third residency at Zea Mays Baillies “experimented with creating wash techniques which were etched directly on plate.  These techniques were applied in a multi-plate etching, which was proofed at ZMP and editioned at home.” In addition she shared her work on Print(ed) Word Project previously mentioned. “I gave a presentation about the Print(ed) Word Project to share my completed artist book ‘ISOBARS’, the catalogue of work and full project.” During her final most recent residence in 2019 Baillies worked on proofing and completing an edition of 30 that utilized a movement component in each piece. “(I) worked on a print to be included in ‘Futurology,’ the 30th Anniversary Print Portfolio of the Alberta Printmakers Society(of which I was a founding member in 1989).  The finished print has 4 images which can be revealed by rotating a circular dial.” 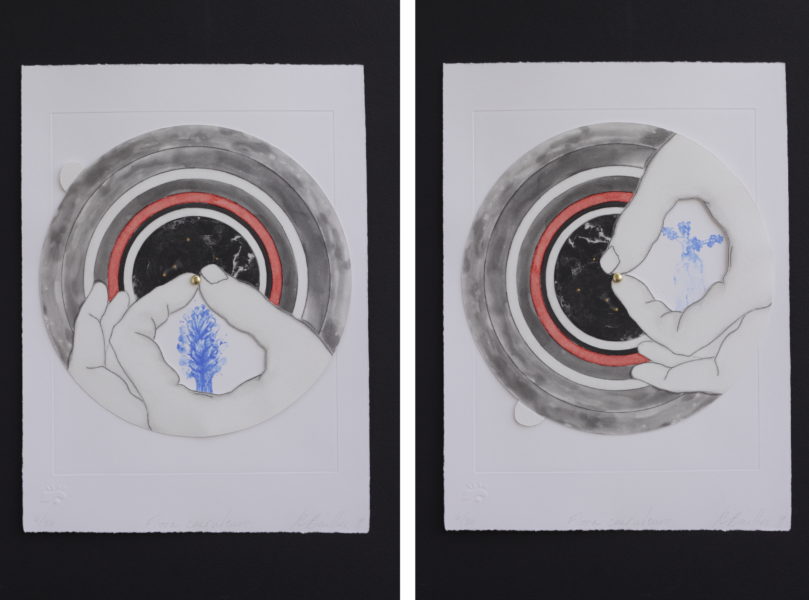 Looking back at her many residencies at Zea Mays Baillies concludes, “The biggest impact of a residency at ZMP came from recognizing how important it is for me to have an uninterrupted period of time in which I can develop imagery without distractions.” She also says the knowledge of alternative printmaking techniques she gained is something she’s brought back to the students and artists she teaches at Alberta Printmakers Studio (in Calgary, AB, CAN). She cites the resources and research shared online by Zea Mays as particularly valuable. Baillies recalls, “The processes used at Zea Mays were easy to learn and incorporate into my work. It has been awesome to be surrounded by printmakers at the studio who have extensive experience with image making using these non-toxic processes and who are so willing to share this knowledge. Being able to talk about qualities inherent to those materials/techniques and exchange ideas about their possibilities has provided important insights and perspectives on my work.”

When the pandemic brought about the close of the studio she works at, Alberta Printmakers, Baillies found her capacity for etching limited. She responded by exploring old mediums, and adapting to her new creative capacity. “As I began revisiting using drypoint techniques on plexiglass(a material I used in my early printmaking days), I embraced the approach used during my first ZMP residency – making drawing explorations on the plate and following where it leads me.  Printing these plates on my Griffin Convertible Press in my home studio, I’m very excited with the new direction of imagery.” Baillies says she’s grateful for the artistic community that Instagram has provided her during this time of adaptation and change. “It has been a wonderful conduit in which to connect with other printmakers and share this new work!”

Looking forward, Baillies plans to continue her long standing collaboration with Zea Mays, adapting a tradition of new skill acquisition and expansion. Referring to her recent work she says, “I see possibilities as to how this work would mesh with the ImagOn HD research project I was intending to do during my 2020 residency.  Switching gears to accommodate the new normal, I have arranged with Liz Chalfin to do online tutorials to research and explore the process of using this product.” Look for more work by Kate Baillies at Zea Mays in the future.