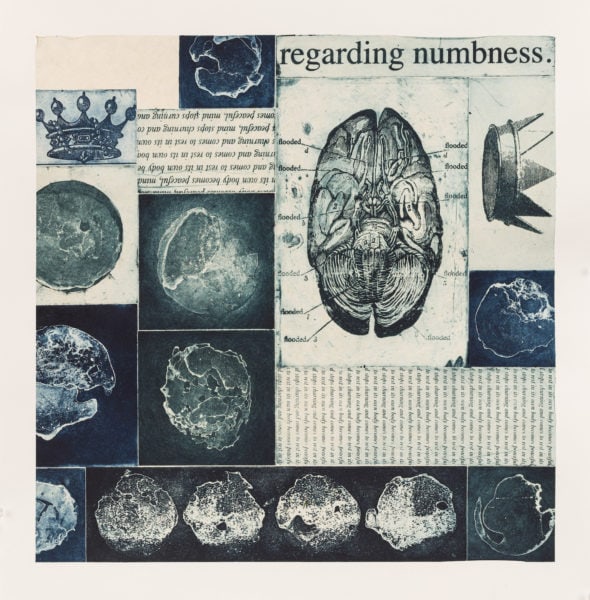 Jonathan Barcan is a mixed media artist currently based in Portland, Oregon. Barcan’s current work focuses on etching, often utilizing aquatint, line etching, drypoint and a variety of other intaglio techniques. His residency at Zea Mays in 2016 was spent investigating new sustainable methods, and experimenting with combining silkscreen methods with copper etching. While employing a myriad of printmaking methods, he also uses a “quilting” approach whereby many smaller plates are combined to create a larger image. Barcan finds this flexibility grants him spontaneity while assembling a piece for printing.

Barcan explains that his work during residencies is guided by the acquisition of new skills and techniques. “When I go on residencies, I am most productive if I use the time to teach myself a new technique or technical skill, and let that help to guide the imagery or art projects that I focus on during my stay. While I was at Zea Mays I was interested in learning how to use screen printing with water-based ink as an acid resist on copper and aluminum etching plates. The hope was that if I could figure this out, then I would more easily be able to incorporate text and also imagery made using programs like Adobe Illustrator and Photoshop into my etching process.” Through trial and error, Barcan found a recipe for an acid resist that allowed him to etch patterns printed via silkscreen onto copper plates. 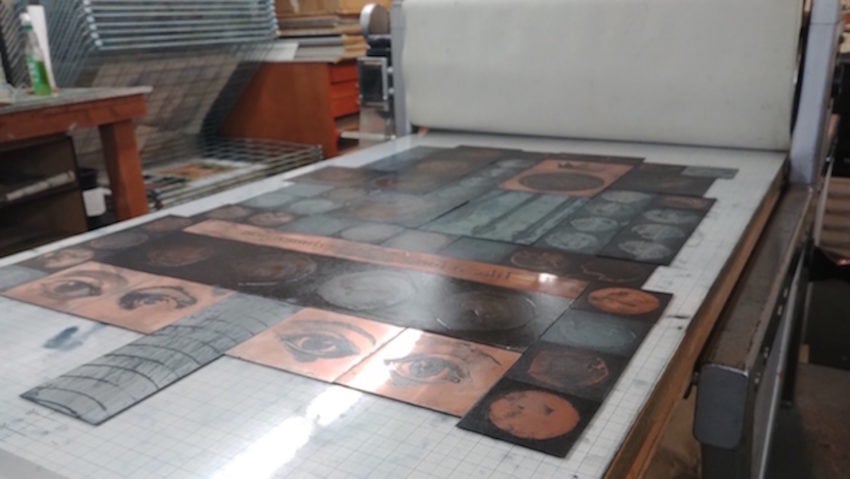 Barcan explains, “In the week and half long residency, I tried a bunch of different tests where I was figuring out the right recipe of screen printing ink, transparent base, and water-based retarder in order to create an acid resist that would hold up for long etch times in both copper sulfate and ferric chloride without lifting.” The most successful recipe, which yields 1 quart container of acid resist, is as follows. 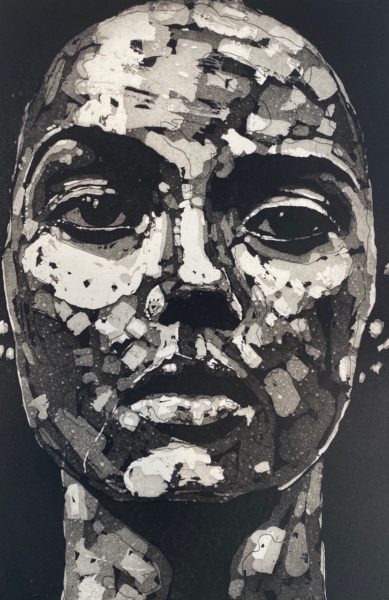 You can use an estisol bath to remove the ground, and/or denatured alcohol also works when you apply with a rag.”

You can see the result of the silkscreen acid resist in his piece “Living Mode #11,” pictured below. Barcan explains this work saying, “During my residency, I finished a small handful of projects, and my favorite piece that I completed is titled ‘Living Mode #11.’ Here I combined drypoint, line etching, soap ground, and aquatint. I rendered the figures with line etching and soap ground, and I added the geometric background texture by screen printing the texture onto the copper plate and then dropping a spray paint aquatint over the top of that and etching to a ‘true black.’” 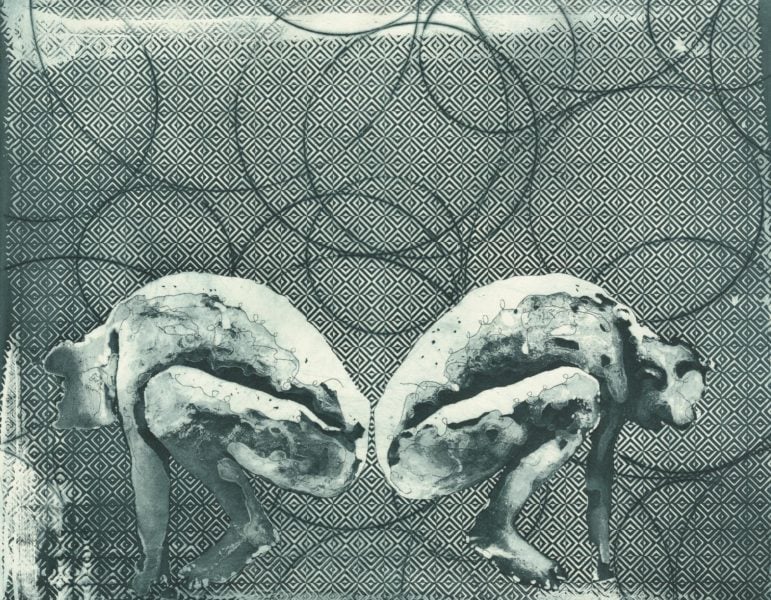 Barcan integrated this new technique into his practice, and continues to utilize it and other techniques he explored during his residency in his current work. “Successfully figuring out this new screen-printable acid resist opened up my personal etching process immensely. It led to many more tests and lots of playing around in the studio, and ultimately making a large new body of work over subsequent years titled ‘Billions and Billions,’  where I created pieces using plates that combined both hand drawn and digitally drawn imagery. The completed works also utilize a multiple plate printing process wherein each image is made up of ten to seventy different etchings, run through the press together on a single sheet of paper.” 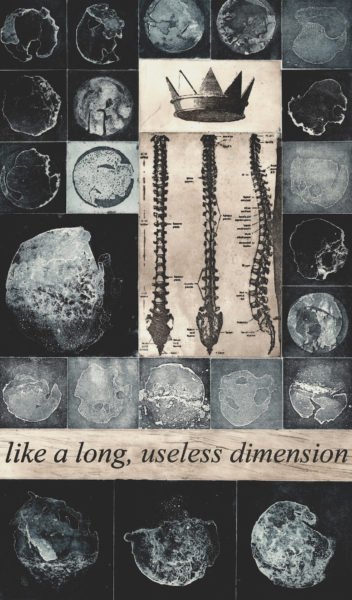 Barcan also used his time at Zea Mays to expand his knowledge of non-toxic printmaking. He notes some of the practices he found helpful, and took with him, saying, “ I was introduced to using estisol as a replacement for denatured alcohol, and also soy solv as a replacement for mineral spirits. I was able to bring this knowledge back to the Colleges that I was teaching for, and helped to nudge their studios towards more non-toxic practices. And, I still use soy solv in my home studio today. During the Zea Mays residency, I also used aluminum + copper sulphate for the first time, and really fell in love with it as a cheap alternative to copper + ferric chloride etching. I still love using aluminum for drypoints, and also some aquatinting projects.”

Barcan shares his gratitude for his time spent learning at Zea Mays, saying, “I would like to take a moment to thank the Zea Mays community for the generosity with which they share their printmaking research- it is truly inspiring!! Thank you for setting such a positive example for sharing knowledge and propagating artistic camaraderie within the broader printmaking community.”

Many of the things Barcan learned at Zea Mays are visible in his current work today, processes and techniques which he has further refined and expanded upon. Barcan’s creative process during the pandemic had a relatable slow start. He shares, “At first when the pandemic and lockdown started, I envisioned that I would be in the studio quite a bit and try to use the time at home to start new projects. However, I soon realized that was a pretty unrealistic goal. It turns out that living through a global pandemic is incredibly exhausting- even if you’re not doing much!” After a few months, he began working on copper etching plates, finding new practices that provided him comfort and inspiration. “I have found that focusing on portraiture, and rendering through observation specifically, to be incredibly meditative. Working on these new plates feels more like solving a math problem than making a piece of art- and I like that about them. I am able to finish a new piece every few weeks, and that has been enough to feel as though I am continuing to advance my practice along in these strange times.”

View more of Jonathan Barcan’s work on his website https://jonathanbarcan.com/