Plates of gate print from residency.

Cody Mack completed his residency at Zea Mays in 2018. Mack works as a preparator at the deCordova Sculpture Park and Museum in Lincoln, MA, where he is responsible for the installation and maintenance of the outdoor sculpture, permanent collection and traveling shows. Mack’s main objective for his time in residence was to explore aquatint on copper and aluminum. Mack spoke highly of his time at Zea Mays: he loved being in the annex, Liz Chalfin’s kindness, and the non-toxic focus of the studio. Mack said that before and during his time in residence he read the research conducted by Zea Mays interns over the years on green practices.

Mack used a vinyl stop out technique instead of a more traditional liquid hard ground during his time in the studio to create a hard edge on the aluminum plates and create an even etch. He likes the control that comes with machine created designs and had a local vinyl cutter cut the shapes he needed for his plates. Mack stressed the importance of removing all the grease from the plate before dropping it in the acid, and how he had to degrease after peeling sections away. Mack has been contemplating the environmental ramifications of using and disposing of vinyl, and is considering using photopolymer plates in the future. 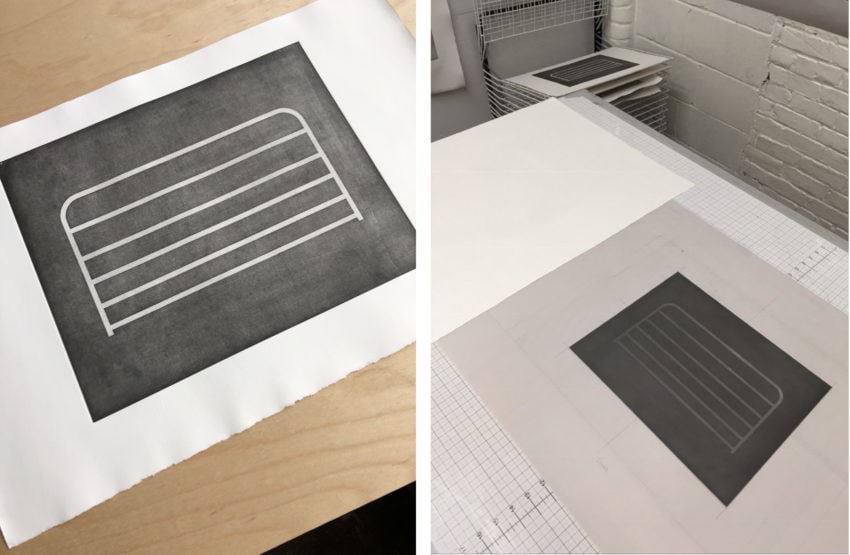 In process shots of gate print from residency. 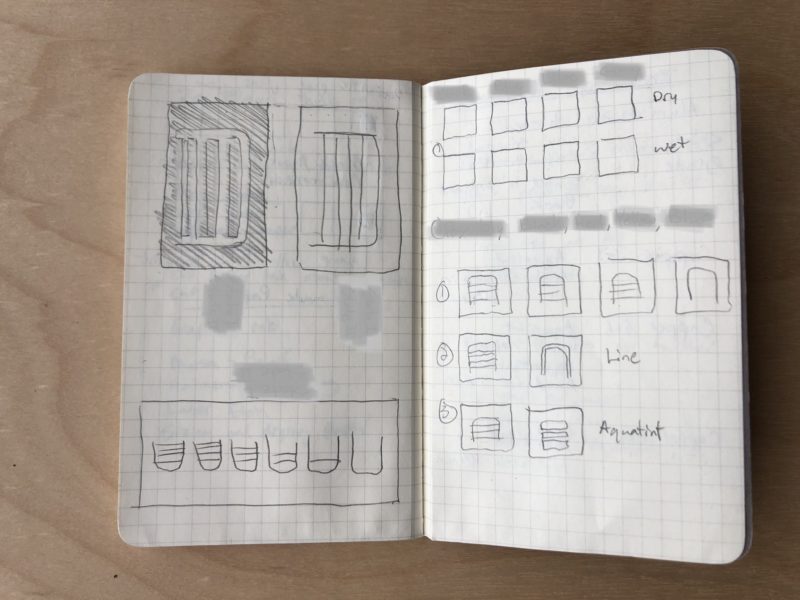 Mack had the subject matter of his project in mind upon arrival. His prints are based on a sculpture of a gate he designed. Mack said he used the gate purely as his subject matter, just as artists such as Josef Albers have used the square, to explore the limitations of his decision making. Mack said he likes the repetition and seriality of art. He said because he’s not primarily a printmaker, printing is always challenging for him, trying to remember everything.

Mack is currently experimenting with a plexiglass plate that he sandblasted and attached vinyl shapes to, similarly to the vinyl stop out technique he used during his residency. Mack said that the pandemic hasn’t changed his studio practices that much, he still works in bursts but it’s definitely distracting. “My studio practice is about the same, sometimes I’m active and sometimes I’m not. It was great to reorganize, going through old notes, and thinking about the next step.” As of right now, Mack will be part of a forthcoming group show at 3S artspace in Portsmouth, NH in 2021. “It’s a bummer that Covid-19 arrived when it did but we are all in the same boat! Maybe it will make us stronger? Maybe we’ll end up smarter too? We can only hope.”

This unique bluestone sculpture(below right) demonstrates Mack’s other work. “I’m not just a printmaker by any means, I use all types of processes to make and support the main idea, which is usually conceptual whether or not there is a huge reason for it.”