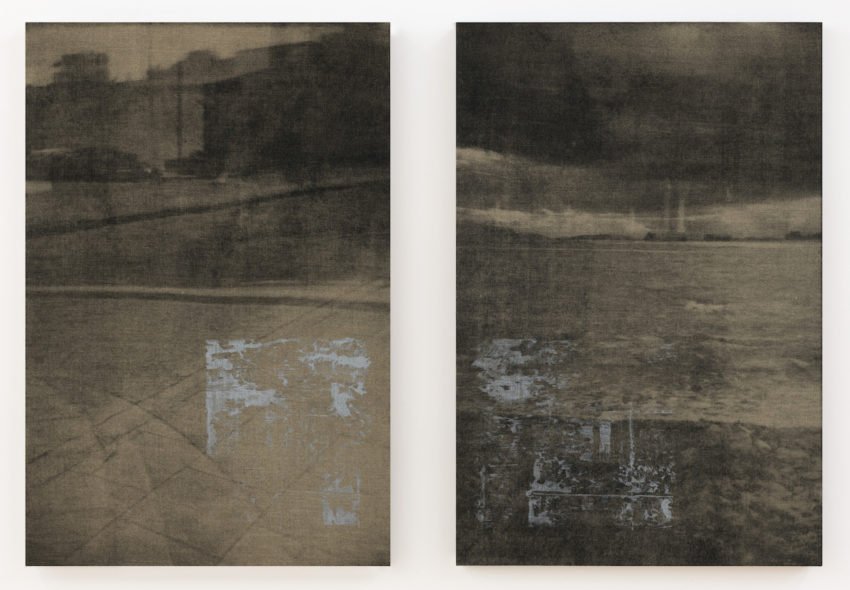 Eirene Efstathiou is a Greek-American artist based in Athens, Greece. Working in a variety of media including painting, installation, performance, and printmaking, her work explores memory and the public sphere. Using pictures and artifacts, she explores the collective perception and documentation of historical events. Her work manipulates visual and text media to find new narratives within the past. She was the resident fellow at Zea Mays in 2017.

Efstathiou’s residency at Zea Mays was important for her current practice for a number of reasons.  First of all, she says, “It was the first formal residency that I had ever done, the first time that I was invited as a residency fellow.  I have been around print shops and studios all of my life because my mother, Judith Allen-Efstathiou, is a printmaker, and I have learned a lot from her, not to mention that I currently use her studio and press here in Athens.  I have also done a couple of DIY residencies at Pickwick Independent Press in Portland, ME.  In addition to painting I also studied printmaking in my undergraduate degree, but there is a big difference between knowing a technique and being able to implement it in your actual art practice.” She adds, “In short, I have found that the best way to learn printmaking techniques is to do a project. Because you raise the stakes by making the outcome of the work dependent on how well you learned the technique.  In other words, you really learn it.” 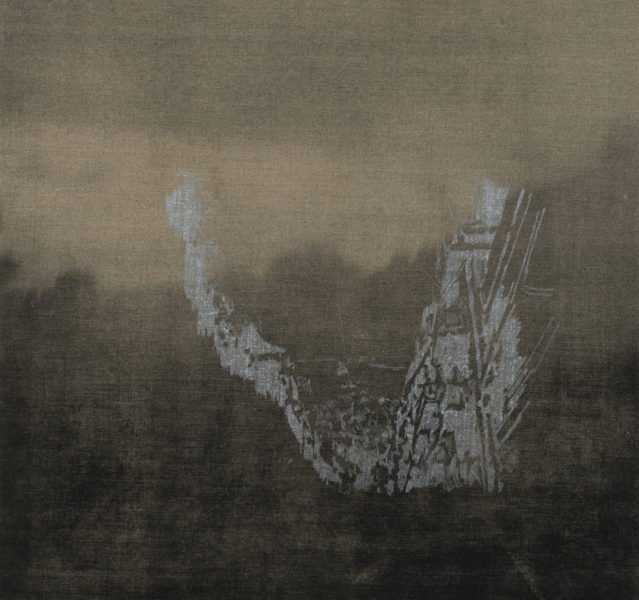 Her time at Zea Mays also helped her further her experience with non-toxic printmaking, and she was very inspired by their mission, regarding sustainable practices and ongoing research into innovations in non-toxic printmaking. There are very few fine-art print shops in Athens and they are all very loyal to traditional printmaking techniques, which use hazardous, environmentally unfriendly chemicals.  Education about non-toxic printmaking and sustainable practices is practically non-existent.  “The know-how about contemporary practices/material safety in printmaking is limited to individuals who have educated themselves (usually abroad) about their materials, and industrial screen printers. Because European legislation about safety of materials is far stricter than American legislation, industry people know exactly what is in the materials that they use.”  In this sense, Efstathiou says “Zea Mays was invaluable to me as an example and a way of working, because it integrated knowledge that I had sort of patchworked together from various different sources.”

Efstathiou’s interest in printmaking centers around its relationship to photographic sources, and the way the technique of the multiple changes and deteriorates the initial source image, much like memory and the passage of time.  She says she is much more interested in these modifications than in the ability to make multiple copies of something.  One of the goals of her residency was to learn new approaches and techniques, and she worked with Liz to explore various transfer processes in intaglio printmaking. In particular she found using BIG ground as a non-photographic way to transfer an image onto a plate useful, and would use it in conjunction with mezzotint, a technique she taught herself when she returned to Greece. “Shout-out to the old-timer printmaking guys of youtube, who make hour long videos explaining every aspect of the process and show you their super weird-cool drawings in the process.” Combining these two techniques, she made a series of detailed etchings that are part of the series A Jagged Line through Space. 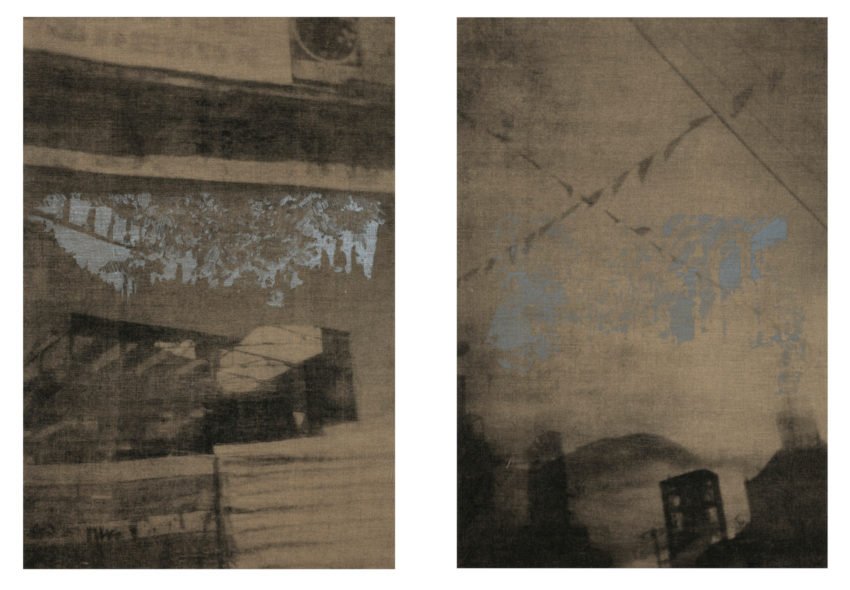 Efstathiou says that residencies are also important because they are periods of focused work.  Another project that she worked on during her residency also formed the basis for works in the series A Jagged Line through Space.  “Here I used a technique that I already knew: large scale paper matrix lithographs (aka xerox lithographs) on linen. Because of the scale and the fact that the linen eliminates a lot of detail the prints become very mysterious looking, they have an ‘outside of time’ quality. The first layer of the works on linen (the lithographs) were printed during my Zea Mays residency and then I spent three years compiling the source material that I would later print over the lithographs as a screen print.”

Efstathiou recently exhibited her work in a solo show A Jagged Line Through Space, at Eleni Koroneou Gallery, Athens. All of the images accompanying this article are from this show. Efstathiou says in her artist statement, “These works are derived from my own photographs and video stills taken over a 10-year period. They document deliberate wanderings along historically significant routes in Athens, Greece where I live. My city wanderings are guided by textual references, and maps drawn by others. In these traversals, I focus on the observation of ‘natural phenomena,’ voids and solids, porous and impermeable spaces, and other such, at once quotidian and ethereal, qualities of place. I propose the works as speculative landscapes, layering different times and techniques as a way to examine place beyond administrative boundaries, built space, and ‘official narratives’ of all kinds.”

A Jagged Line Through Space 3(left) and 1(right), 2019. Etching and mezzotint on paper.

At the start of 2020 Greece responded with strict measures to the pandemic. At the time of this writing, Greece is in the throes of the second wave and in the midst of its second lockdown.  Efstathiou explains that lockdown in Greece is much stricter than in the US.  “You need a permission slip from the government to even leave your house, there is a 9pm curfew and steep fines for people who violate the measures.”  She also says the changes have affected a lot of normal social practices.  “Social life has basically ground to a halt, everything about social interactions has been turned on its head in the pandemic. Southern Europe is a culture of embraces and kissing and close talking.  Besides everything else it’s been weird not to be able to embrace people.” Efstathiou describes how her practice, as well as other creatives were affected by the lack of social life.  “This myth about creative people as solitary practitioners whose life doesn’t change with the curtailing of public life really irritates me.  As artists we are not outside of society, society is going through an extremely difficult thing right now, and we go through it just the same.  Even though a lot of my work is done alone in the studio my practice really needs other people and a community.  It’s been tough.”  The discipline of the first lockdown meant that in the summer and early fall, Greece was eventually able to reopen to a certain extent, and a large amount of activities resumed.  “I was working towards two shows in spring that were postponed during the first lockdown, the happy news is that they were both able to open in fall and have successful runs.  It’s good to have something concrete to work towards, at this point I think people are planning exhibitions for the new year exactly for that reason, to give everyone something to work towards.” 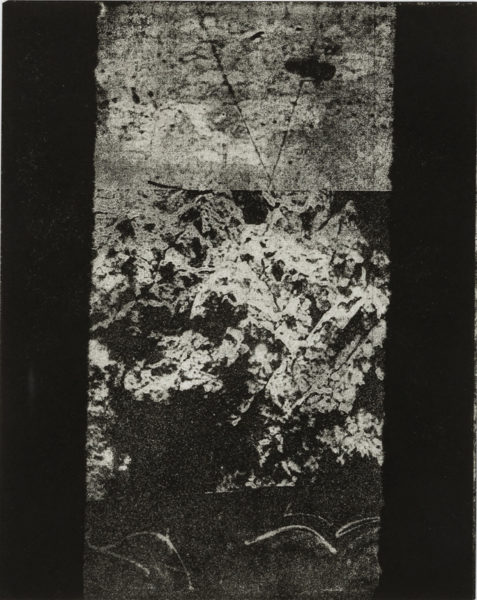 A Jagged Line Through Space 4, 2019. Etching and mezzotint on paper.

As everywhere, the arts in Greece have been seriously financially impacted.  Efstathiou’s work as an art history instructor has been affected.  During the pandemic Efstathiou was part of the formation of an informal print collective with a group of her creative acquaintances.  “Founding the first non-toxic printshop in Greece has been something that I have had in the works for a few years, my time at Zea Mays reminded me that one of the things I love about printmaking is that you’re not alone in your studio, it’s something you do with other people.  Faced with financial uncertainty and precarity we decided the best thing to do was to approach the situation together, pooling equipment, and most importantly know-how.”  Efstathiou practices as much sustainability as she can in her own printmaking and aims to expand the horizons of her local art community. “We are in the process of renovating a space, initially it was just intended to be a shared workspace, but the more we thought about it, the more it seemed important to open it up as a community print shop, especially in the absence of a green shop in Athens. It may seem crazy to found a shop in these uncertain times, but I really believe that small collectively organized endeavors are much more flexible than a big institution, these endeavors are an opportunity to institute otherwise. That’s another thing that was inspiring about Zea Mays, that despite its long history and important contribution to research and sustainable practices it’s not a big faceless institution.”

See more of Eirene Efstathiou’s work on her website www.eireneefstathiou.com

And support the her studio collective here https://gofundme.com/f/printshop-renovation-project