Test Summary
This test was to determine if the printer used to make the press n peel film makes a difference.  Does a high quality printer produce a better image than a low quality printer?

Plate Preparation
The plates were beveled, polished with 00 grade steel wool, and degreased with soy sauce and bon ami.
The image was printed on the PCB film with a Brother HL2280DW  laser printer. The copper plate was placed on a phone book and the film was placed on its surface print-side-down. The film was carefully heated to the plate with a tacking iron for 8 minutes at 300 degrees F.

Etching Notes The plate was etched in a 42 degrees Baume Ferric Chloride bath in a vertical tank.

Removal of Grounds:  Plates were saturated with Soy Solv cleaner and left to soak for 5 minutes. Ground was then wiped off easily with a rag. 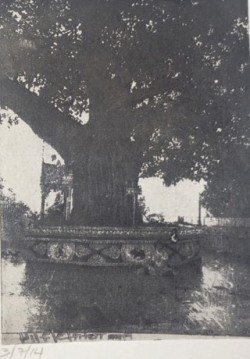