Test Summary
The test sought to determine if the PCB film responds better if the lines of the image are positive or negative. To do this I created 2 films from the same image (a watercolor drawing) and inverted one image to create a negative and left the other one as a positive. I also hoped to determine if the Highlights step in Photoshop was necessary or if that could be done in Brightness/Contrast instead making for fewer steps in Image
Preparation.
. 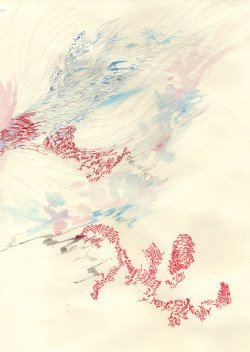 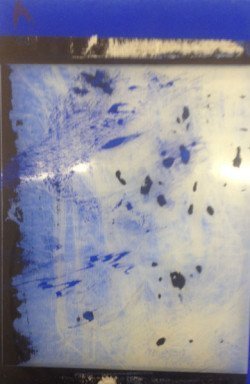 Plate A, film after transfer 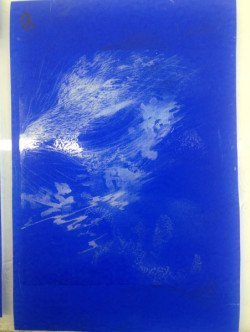 Plate B, film after transfer

Etching Notes : The plate was etched in a 39 degrees Baume Ferric Chloride bath in a vertical tank.
Time in Bath  20 minutes
Removal of Grounds:  Plates were saturated with SoySolvII and left to soak for 5 minutes. Ground was then wiped off easily with a rag.

Test Conclusion:  Hightlights step does not seem necessary and the brightness/contrast of Plate A looked correct on the screen in photoshop but did not transfer well. The tester still seems to think the toner lying in the white areas, or having the drawing be the white of the image is one possible and successful way to use this film. 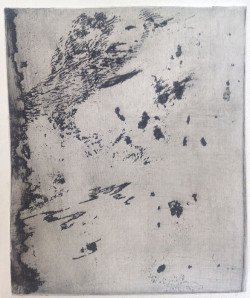 Plate A
The tonalities are lost in the background, it is reading as solid black and the blacks are too dense they are not allowing the press n peel to stick to the plate in any of the dark areas. So the darks need to be in the gray range. The film wants to stick to the black because there is a solid layer of toner. 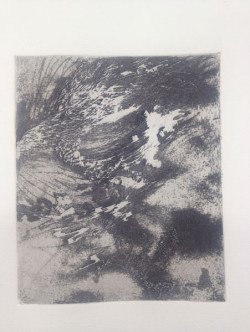 Plate B
The image was not inverted and the press n peel protected all the marks even the finest lines. The open bite around the lines created a confusing cacophony of mid-tones and darks. The smudges acted like an aquatint. Everything, even the most subtle tonalities transferred.