Test Summary
Still testing the possibilities of using an extreme black and white image. The purpose of this test was to follow the original directions using a drawing that has a black background and a white drawing as the foreground,  to determine how the PCB film responds with an image being created by white lines. 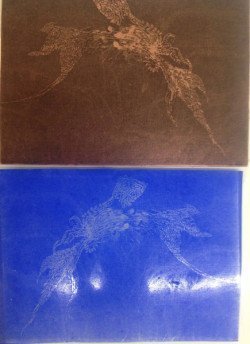 Removal of Grounds:  Plates were saturated with SoySolvII cleaner and left to soak for 5 minutes. Ground was then wiped off easily with a rag.

After Bath Evaluation: Looks like a good transfer and an interesting plate. 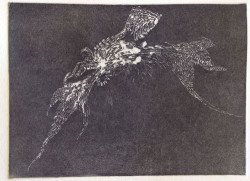 Test Conclusion
The image came out well and the tester was able to see the grain on the plate and notice that the laser printer was creating a pattern as strong or stronger than the aquatint screen being embedded in Photoshop.