Test Summary: The purpose of this test was to determine the adjustments we needed to make in Photoshop. We made two separate images adjusted differently in Photoshop and compared the results.

The image to be used was opened in Photoshop, then inverted in two ways.

The image was printed on the PCB Press and Peel film with a Brother HL2280DW laser printer. The copper plate was placed on a phone book and the film was placed on its surface print-side-down. The film was carefully heated to the plate with a tacking iron for 8 minutes at 300 degrees F. 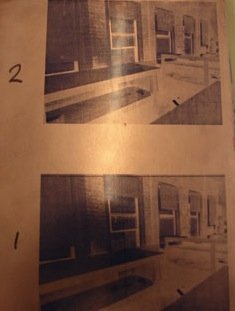 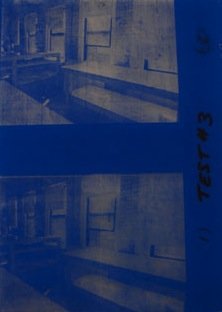 Etching Notes:  The plate was etched in a 39 degrees Baume Ferric Chloride bath in a vertical tank.
Time in Bath:  30 minutes
Removal of Grounds : Plates were saturated with Soy Solv cleaner and left to soak for 5 minutes. Ground was then wiped off easily with a rag.
After Bath Evaluation  :The plate etched effectively with no visible damage to the image quality. 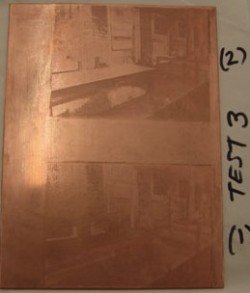 Inking Methods:  Plate was inked with Graphic Chemical Etching Ink in Bone Black, applied with a piece of mat board. It was gently hand-wiped in an outwards motion with a piece of tarletan. Then paper wiped. 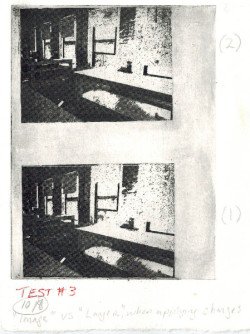 Test Conclusion: Some small differences were seen between the two images created in different ways in Photoshop. The top right corner of Plate A has a slight more gray tone in the image.

No noticeable difference between test #22 and this test. The mid-tones in the window area are washing out.