Plate Preparation
Plate was degreased with Bon Ami powder and soy sauce that was rubbed onto surface with a scrap of rolled felt. The plate was rinsed under running water and dried by blotting on newsprint and using a blowdryer. A thin layer of BIG ground was rolled out on a glass slab using a 10″ brayer. The ground was rolled onto the plate in all directions to apply a thin even coat. The oven was preheated at 240 degrees on the ‘convention’ setting. Plate was set aside as sugar get prepared. About 1/2 cup of Tate & Lyle icing sugar was placed on the top of the mesh of a cake sifter. Placing the plate directly underneath the sifter, an inking spatula was used to move around the sugar on the mesh to allow it to fall onto plate. This was continued until the plate was completely covered in sugar and no red of the ground could be seen through the layer of white sugar on surface. Plate was lifted vertically and tapped on it’s edge against the table to remove excess sugar. The appearance of the plate surface was varied and uneven with some darker pink spots and some whiter spots which seemed to have more sugar and appear whiter.

After a few minutes, the plate was placed in the preheated oven and cooked for 6 minutes. After baking, plate was left alone for one hour. At that point, the plate surface felt room temperature and the sugar had hardened.

Using a tray and warm water (tap hot), plate was submerged and repeatedly rinsed to dissolve sugar. The tray was continuously tilted to move water over surface and new water is replaced every few minutes. This was repeated for 15 minutes. Looking through a magnifier, this method did not seem to be exposing any copper so a more forceful approach was tried by running the plate directly under the faucet stream. After an hour of switching between rinsing the plate and leaving it submerged in a tray of warm water, it was decided that the open/lifted sugar areas may be too small to actually see. 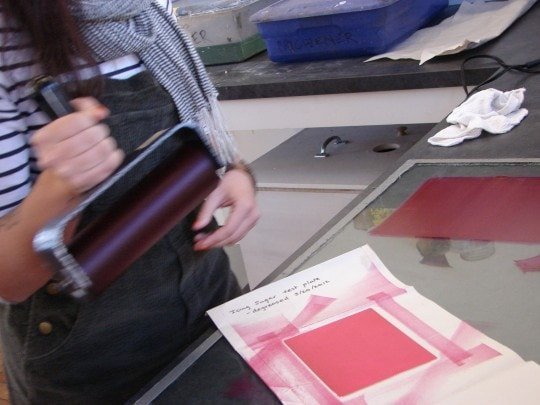 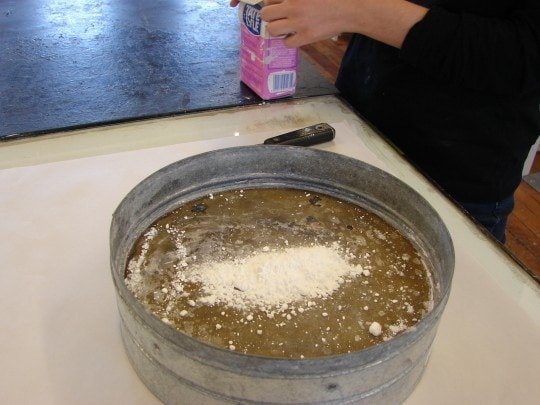 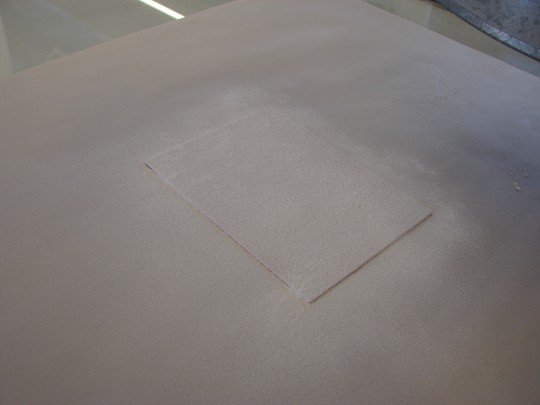 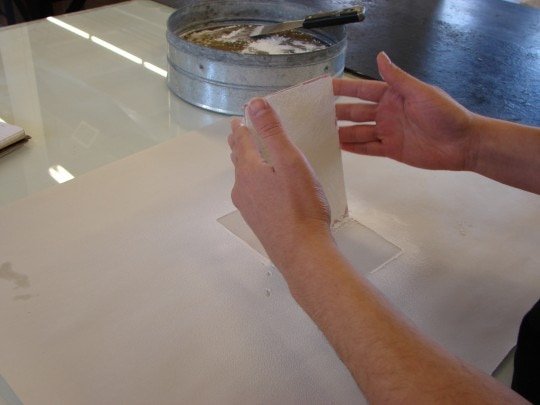 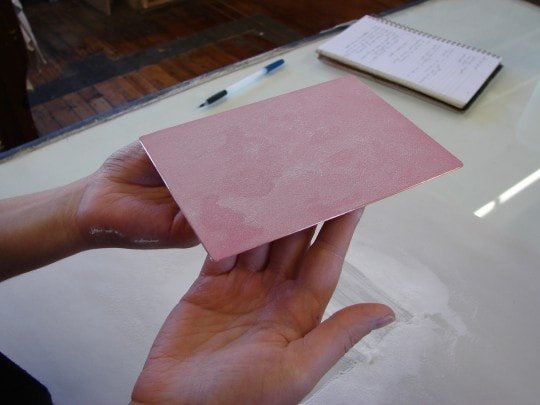 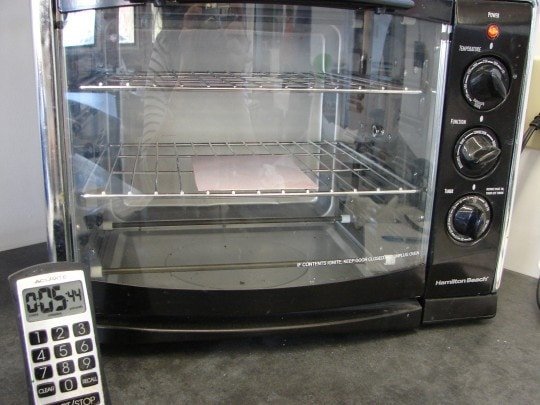 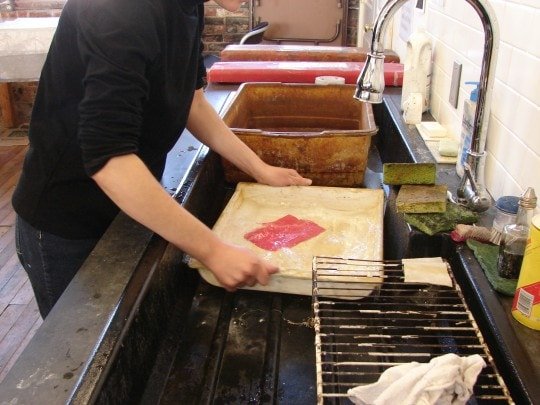 Etching Notes
Plate was placed in tray of salt and vinegar to remove any oxidation and backed with contact paper. Plate was placed flat into a tray of ferric to etch for 10 minutes. Plate surface had some visible discoloration that could be seen through the red of the ground. While plate was in tray, acid was carefully sloshed from side to side to avoid having bubbles form on the surface which would result as a resist. After 10 minutes, plate was rinsed under faucet and placed in stripper bath to remove grounds. While handling plate under faucet, the edge was touched with a thumb that quickly removed the ground which later was found to be the area of the plate that printed the darkest. 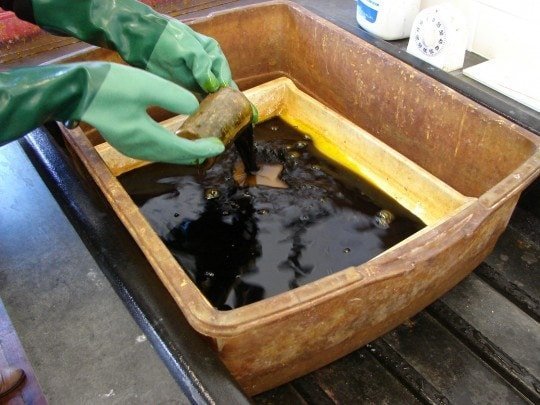 Removal of Grounds
The plate was left in the stripper bath for 5 minutes. It was then removed from the bath and sprayed with soy solve. These methods removed the surface of the ground but did not successfully clean all of the ground out of the plate. Soy solve was then sprayed on plate and left to sit for a few minutes. After repeatedly cleaning the plate with soy solve, it was then placed in salt and vinegar and blotted with newsprint. The plate still had a faint pink tone making it possible to still have some remaining ground within the grooves of the aquatint. 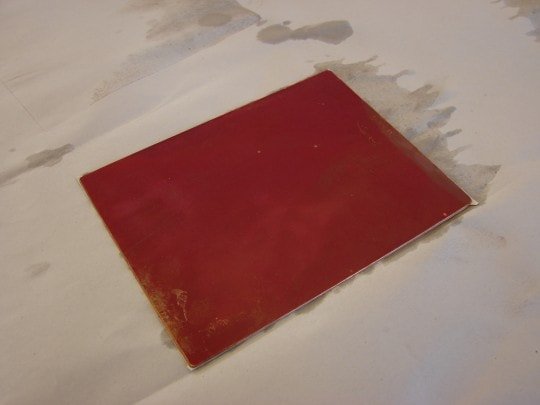 Inking Methods
Plate was inked using Graphic Chemical bone black. The ink was carded on with mat board scraps, wiped in gentle circular motions with used tarletan and palm wiped. The proof had a lot of variation in tone which was not necessarily matching the various spots noticed prior to wiping. Aside from lighter areas and variation, the aquatint was successful. The second proof was inked with Gamblin portland Black, using the same inking methods. This ink produced a darker, more solid black but the variation in tone remains. 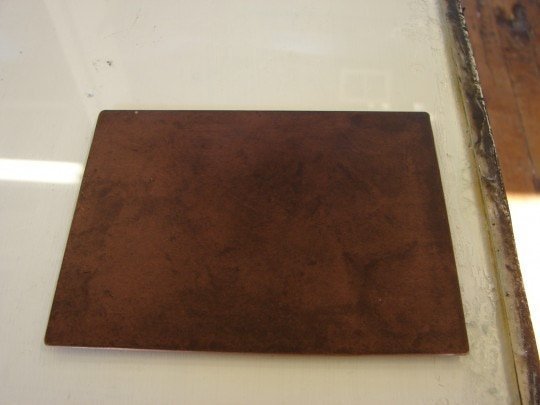 Test Conclusion
It was concluded that oxidation was the cause of the swirl type marks that were disrupting the even tone. It is possible that the breaks taken while rinsing sugar off the plate to blot with newsprint and look through the magnifier could have caused repeated oxidation. The plan of action for the next test is to repeat the entire process done during this test but to be more precise and aware of when the plate is wet-to-dry. 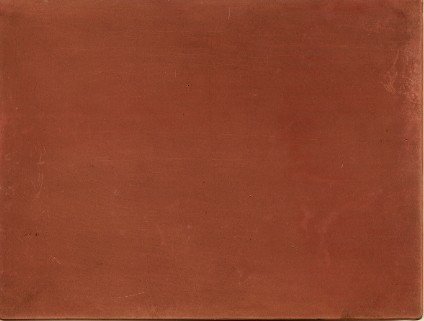 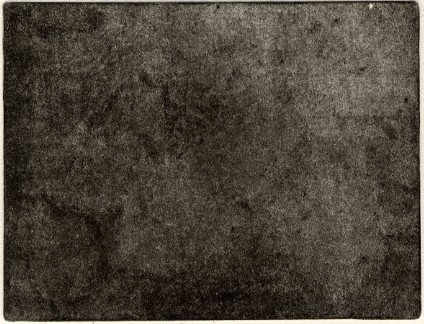 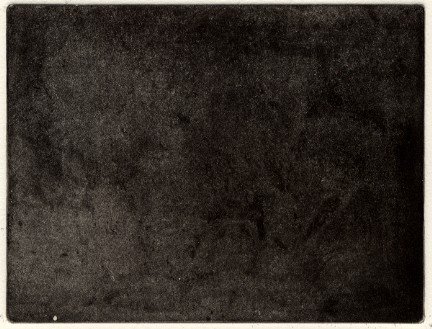