Test Summary
This experiment tests a process developed by Andrew Baldwin in which icing sugar is used to create an aquatint. Using a cake sieve, the icing sugar was dusted onto a grounded plate. For this test, the plate was etched for 20 minutes to create a darker tone. This plate was prepared with Tate & Lyle British icing sugar and was created side by side with the plate for Test 17 which used American icing sugar.

Plate Preparation
The plate was degreased with soy sauce and bon ami that was rubbed onto surface with a scrap of rolled felt. The plate was rinsed under running water, dried by blotting on newsprint and using a blowdryer. A thin layer of BIG ground was rolled out on a glass slab using a 10″ brayer. The ground was rolled onto the plate in all directions to apply a thin even coat. The oven was preheated at 240 degrees on the ‘convention’ setting. Plate was set aside as sugar get prepared.

The icing sugar was pre-sifted and set aside to create a faster, more even application. The pile of pre-sifted Tate & Lyle icing sugar was placed on the top of the mesh of a cake sifter. Placing the plate directly underneath, the sifter was shaken from side to side to allow the sugar to dust down onto the plate. A 4-inch, flat scraper was then used to move around the rest of the sugar on the mesh to allow it to fall onto plate. This was continued until the plate was completely covered in sugar and no red of the ground can be seen through the layer of white sugar on surface. The sugar was lumpy, sticky and falling in large particles down onto the grounded plate. Plate was left alone with heap of sugar for 5 minutes. Plate was then lifted vertically and tapped on it’s edge against the table to remove excess sugar. The appearance of the plate surface was smooth and mostly even. The plate was left alone flat on a table for 30 minutes to allow the sugar to dissolve into the ground.

Using a tray and warm water (tap hot), plate was submerged and repeatedly rinsed to dissolve sugar. The water was sloshed around to continuously move water over surface and new water is replaced every few minutes. Plate was also ran directly under the faucet stream. These methods were switched between and repeated for 20 minutes. The plate was then blotted dry and backed with contact paper. 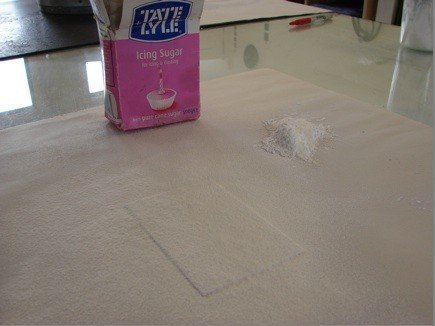 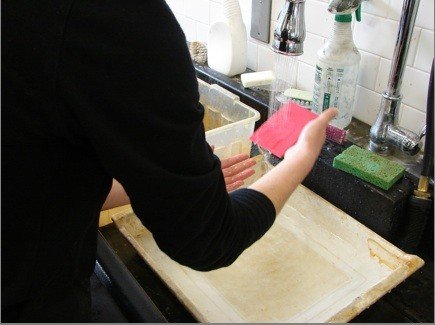 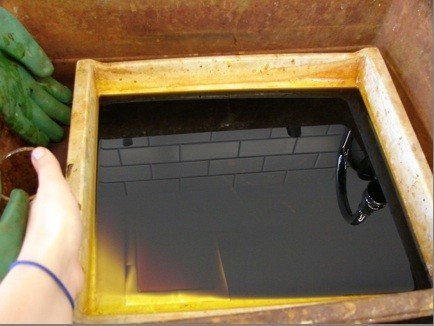 Removal of Grounds
Ground was removed immediately after etching with soy solve and a rag. Plate was placed in brightener bath and blotted dry before inking.

After Bath Evaluation
At 20 minutes, the ground was very weak and completely came off while rinsing under faucet. The plate seemed to have some variation and lighter, atmospheric shapes on surface. 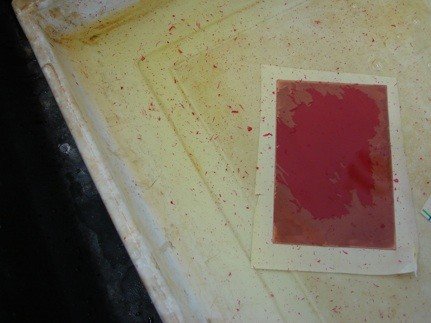 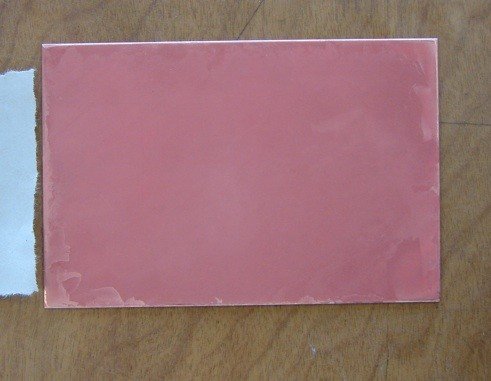 Test Conclusion
The proof looked smooth with some blocked-out, open bit edges where some ground was removed. The plate gave a dark grey, but not black. 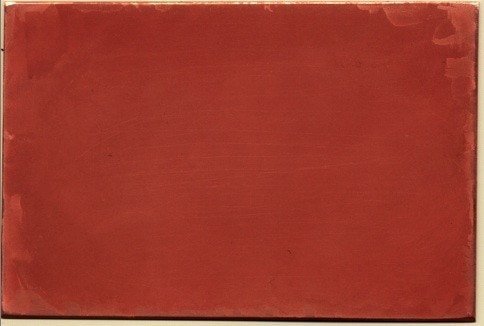 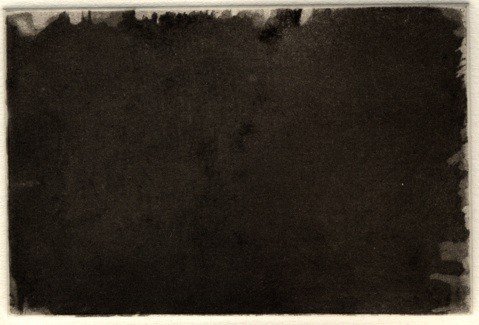