Procedure:
We mixed ingredients together in small container and sprayed through Badger Airbrush on finest possible setting onto newsprint. The plates were sprayed at a distance of 6-8 inches with approximately 15 passes. They were set to dry in the drying box for 20 minutes, then removed and sat grounded in our drawer for one week before etching. They were then step-etched in 37 degree baume ferric chloride. The plates were stripped first with the stripper bath and finished with SoySolv II spray. They were then printed two times. 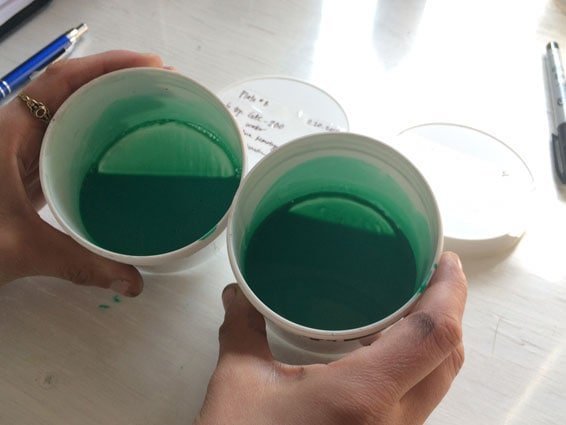 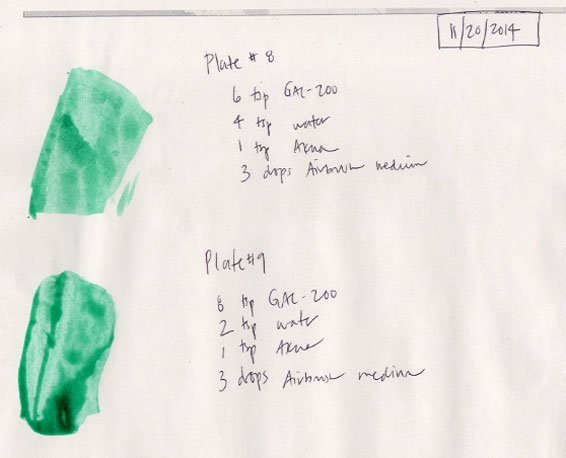 The Mixture
We decided to make mixtures with GAC-200 after our call with Golden. The nice man on the phone told us that GAC-200 is less flexible and dries harder than GAC-100, so we were hoping this would mean that it would not degrade in the acid. We also ran out of the Akua jet black monotype ink, so we turned to phthalo green. The mixture had a similar viscosity to Z-Acryl. We found that mix #2, which had less water than mix #1, the phthalo green seemed darker. The green was virtually impossible to see when sprayed on the newsprint, even when looking through a loupe, and was also difficult to see on the plate. When the plate was tilted into the light, however, the texture of the sprayed ground resembled a rosin aquatint. Both mixtures went through the airbrush well, but mix #1 gave a particularly fine spray. 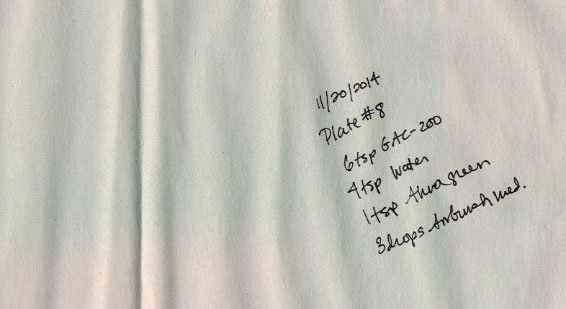 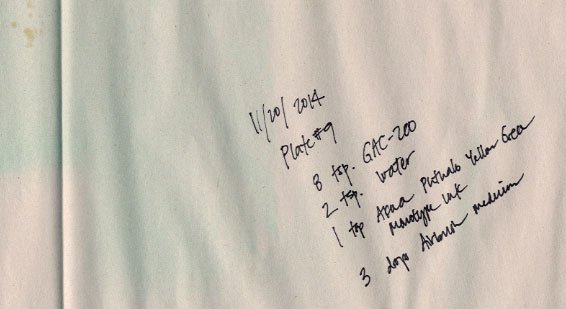 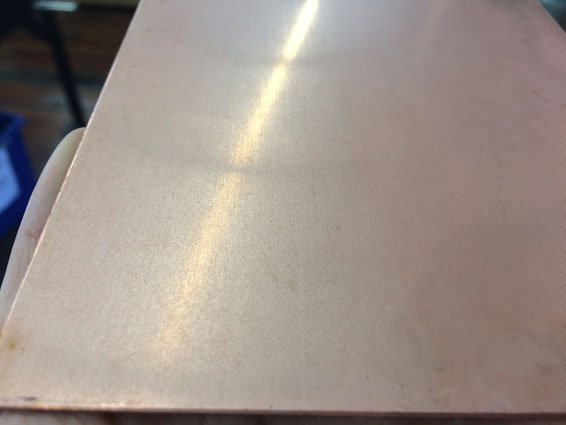 Stripping
These plates were fairly difficult to strip. They sat in the stripper bath for approximately 15 minutes, and then the SoySolv II for approx 45 minutes. At the end, they felt much better than the plates made with GAC-100. We did not observe the rough, sandpaper-like texture of the GAC-100 plates, so we were hopeful that the spray held up in the acid better. We found that these plates did not deoxidize as well as most. After leaving them in the deoxidizer bath for 2 hours, they still had patches of discoloration. We speculated that it might be because they sat in the SoySolv II for too long. Looking through the loupe, these plates looked better than we expected. There were some wider dots on plate #9, which could have been from the ground degrading in the acid or from the plate being under-sprayed in those areas.

Printing
We printed on a Takach press using 2 sizing catchers at 5.5 pressure. Ink: Charbonnel #55981 oil-based etching ink with 2 drops 00 plate oil. Paper: Hahnemuhle copperplate white. These plates printed better than plates 6 and 7 (made with GAC-100), but they were not perfect. The tone was finer and more even, and did not seem to have degraded with the longer etch times. The 20 minute etch was a dark black even tone, but the mid-tones showed some blotchiness like the GAC-100 plates. 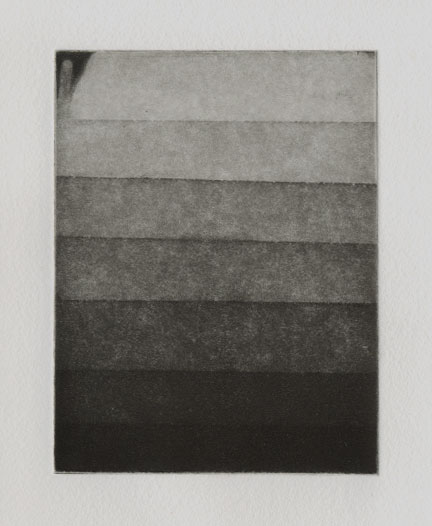