To start, we began by making our black aquatint plates. To do this we prepared 4 copper plates for aquatinting by beveling the edges, lightly buffing the surfaces, degreasing with Bon Ami and deoxidizing with soy sauce. After the degreasing process, we sprayed the first layer of acrylic aquatint in the double aquatint process. We sprayed two plates at once in the spray booth for efficiency.

Standing back, we sprayed a fine coating of ZMP Airbrush Aquatint fluid onto the plates. We were aiming for a coverage of 60/40 of aquatint to copper. 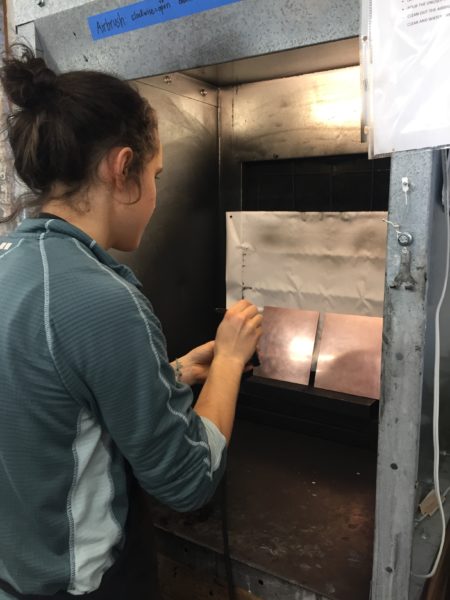 Spraying the aquatint in the spray booth 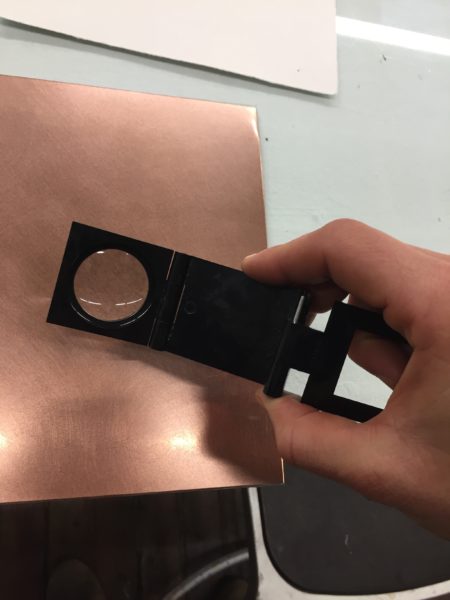 After the plates were sprayed, we heat set the wet aquatint in a hot box for 15-20 minutes. 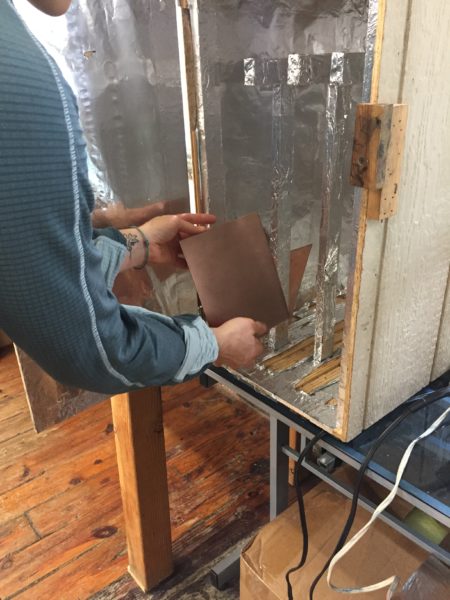 Heat setting the plates in the hot box

After the aquatint dried, we etch the plates in a ferric chloride bath, with a baume of 38, for 15 minutes. We then removed the plates from the bath, rinsed them with water, soaked them in the deoxidizing bath for a few seconds, rinsed again, and then blow dried the plates, being careful not to remove any aquatint. 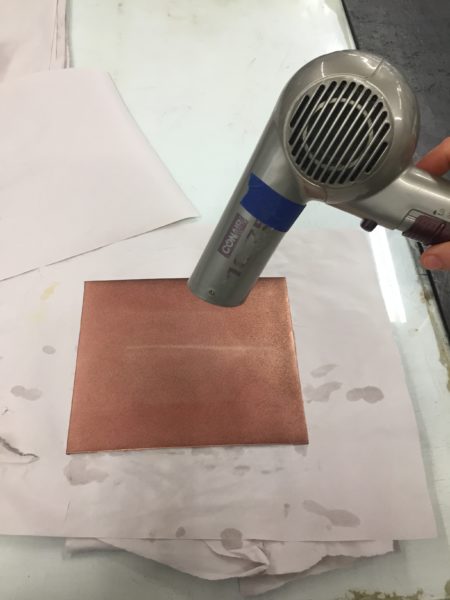 Drying the plate after it is out of the bath and rinsed, using a hairdryer so as to not disturb the aquatint

We then repeated the process and applied a second aquatint on top of the first. This double aquatint will result in a richer, deeper black than a single layer would. 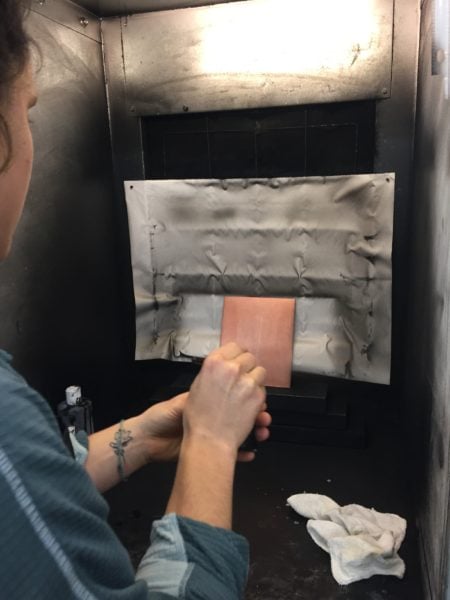 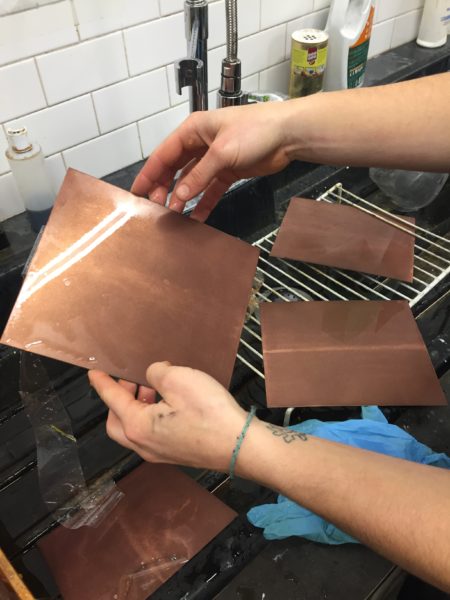 All of the plates, out of the bath and rinsed

We then pulled proofs of the plates to test the quality of the aquatint. We were looking for the print to be a rich black that evenly covered the plate. 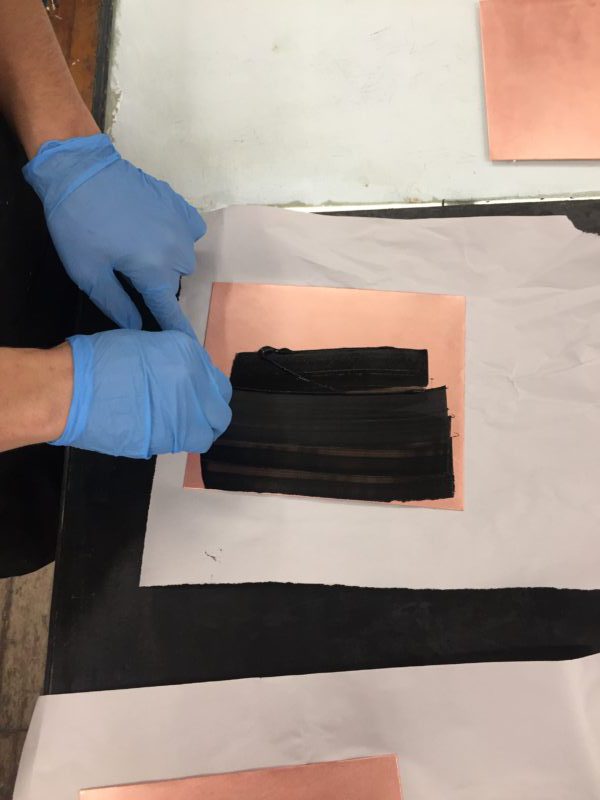 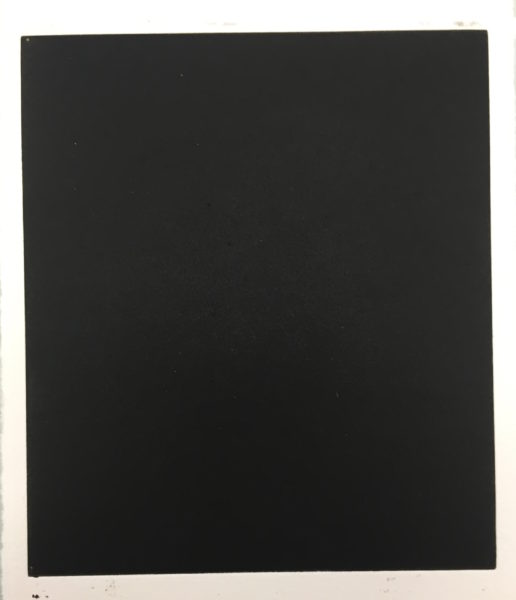 A successful double aquatint, the whole plate is evenly covered in a deep black aquatint.

We were testing for a few different things:

We tested the following acrylics: Zea May’s Acrylic stop out, GAC 100, GAC 200 and Gold Acrylic Medium. We wanted to test how the thickness of the acrylic affects the application of the mediums to the plate. The following image shows how we are laying out the test on an aquatinted plate: 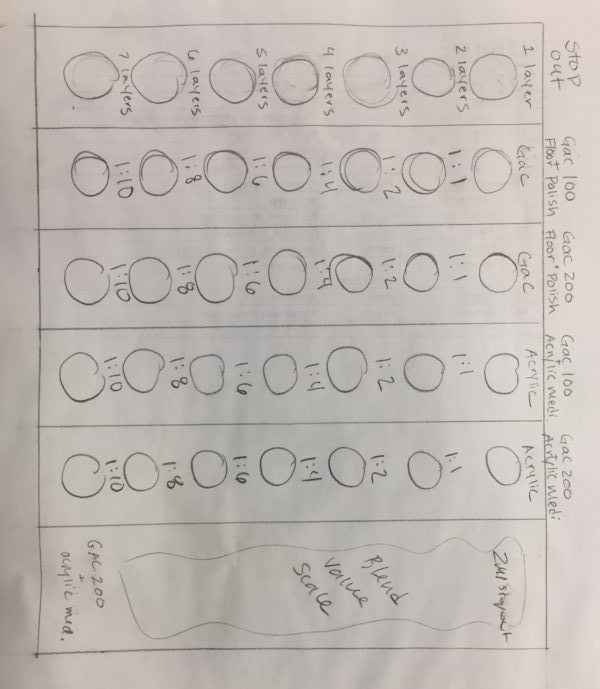 Image showing how the value scale will be created using 5 different Acrylics. 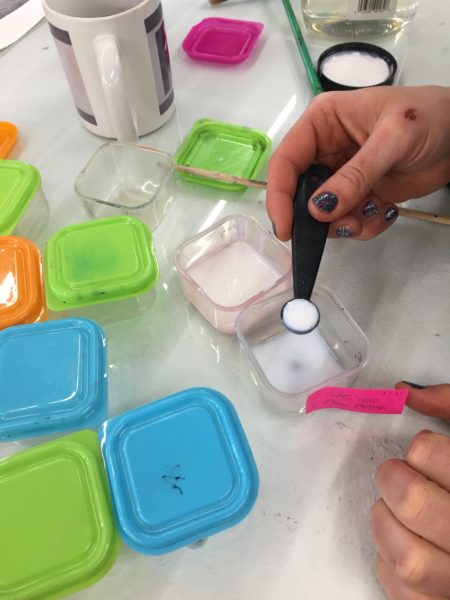 Mixing up the different ratios 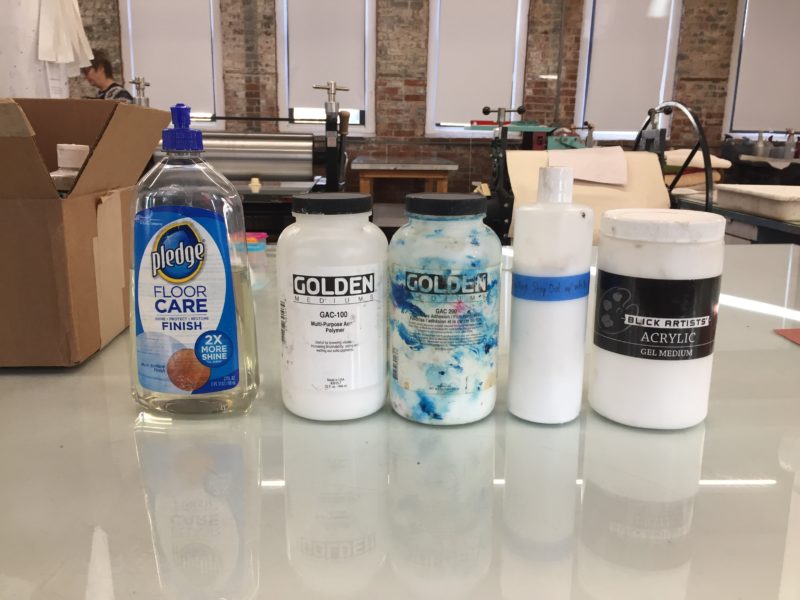 The acrylic mediums we used in our test.

The materials we experimented with are the floor polish (which is a major component of the ZMP stop out), GAC 100, GAC 200, the ZMP stop out, and Acrylic Gel Medium. We attempted to apply the mediums in thin even brush strokes so as to keep consistent the amount that was being applied between each ratio.

In the middle of the application of the different ratios. Dot size and thickness is trying to be kept consistent. 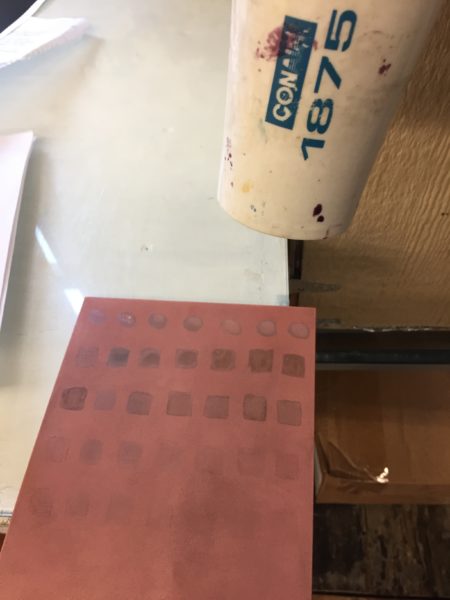 Blow drying the plate to dry and harden the various acrylics 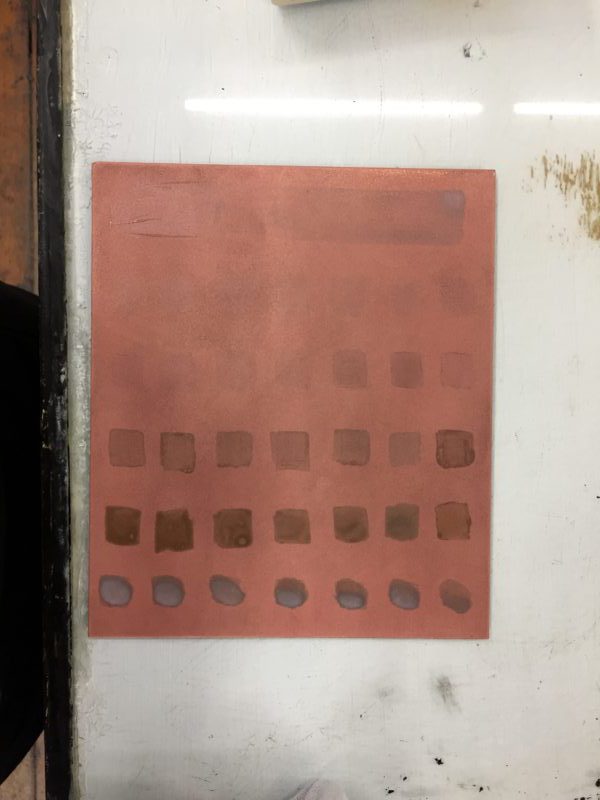 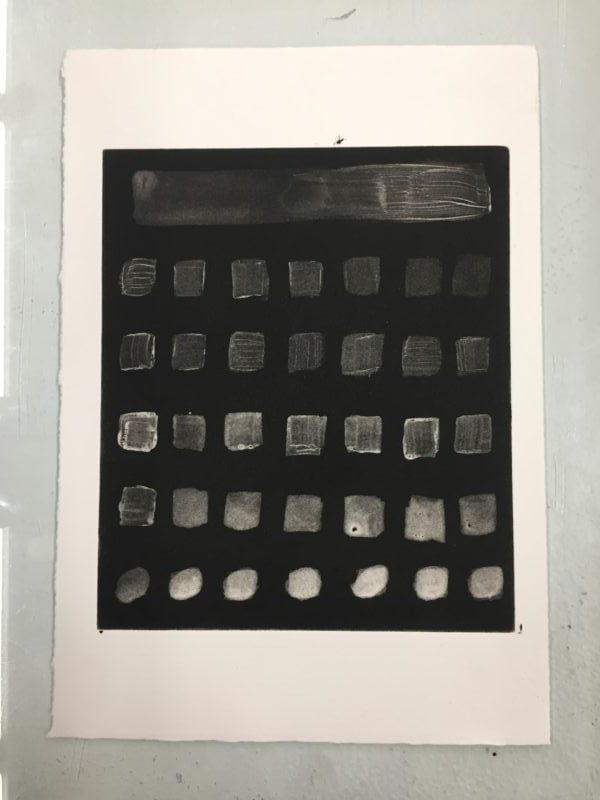 The right most column of dots is the ZMP stop out, which was harder to apply in a thin layer due to its watery nature. The thicker the medium, the left three columns, were harder to apply without leaving brush strokes. There is little to no value changes with in the columns, which suggests, that the value rants is not something that is achieved trough thickness of material, but rather through the application of layers. 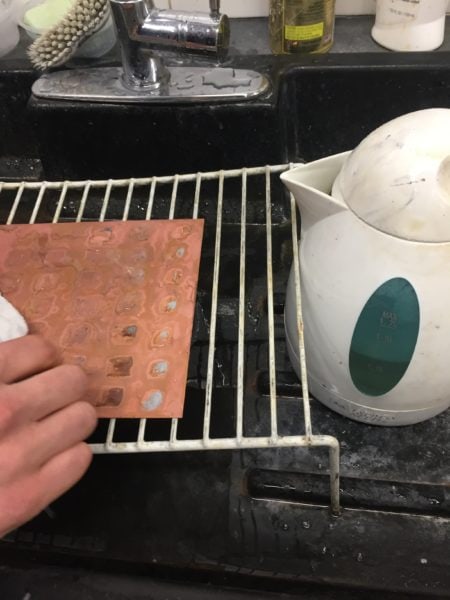 Stripping the plate with boiling water

Stripping the plate proved difficult. We tried various methods, including letting the plate sit in the stripper bath for over an hour, letting estisol sit on the plate, pouring boiling water over the plate, and scrubbing with 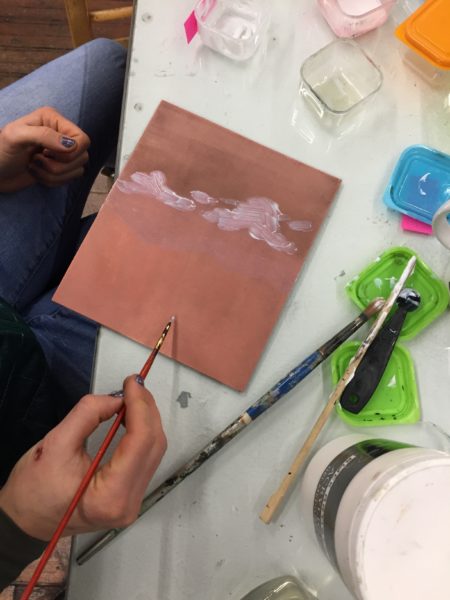 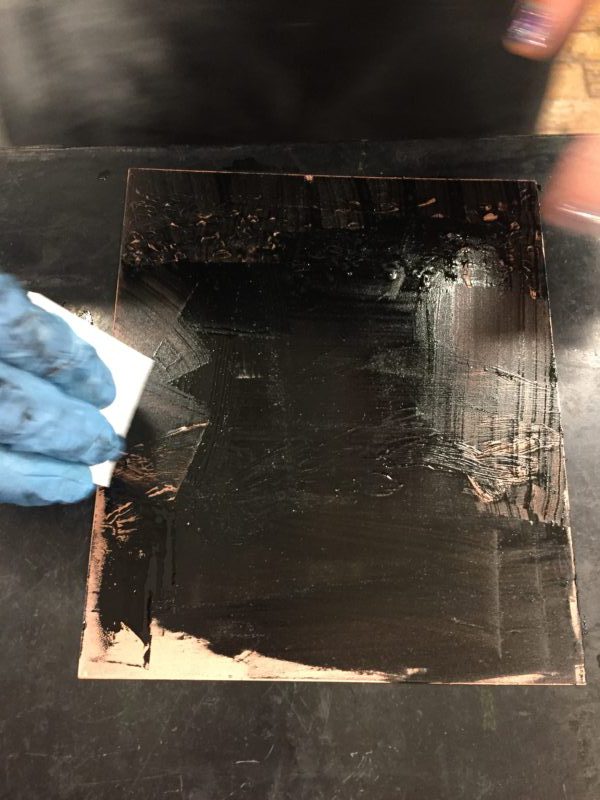 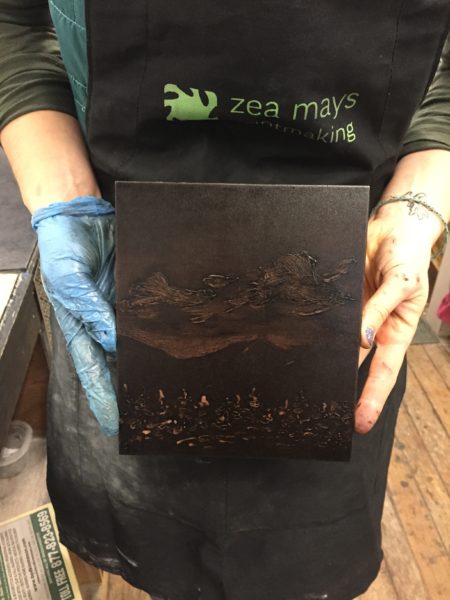 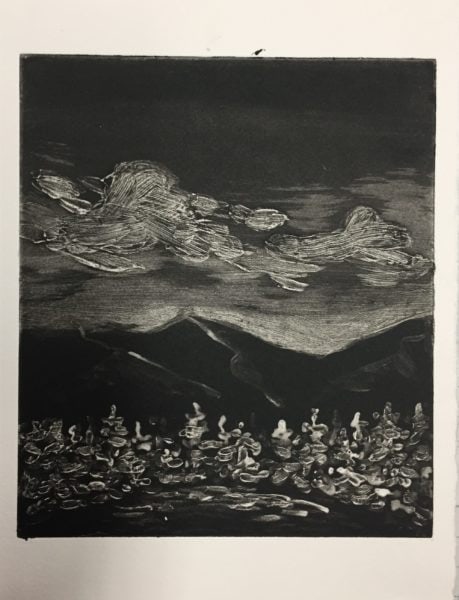 The final print showed a nice transition of value in the sky, but we noted that gradations were much more difficult to achieve when adding layer on top of dried layer, as opposed to creating a gradient with one liquid layer at once. The GAC in the clouds did not self-level and left distinct brush marks. For this reason, the stop out (which self-leveled to a very smooth surface) created the brightest whites in the image.

These tests left us wondering more about the image making process because the application of the mediums is so dependent upon how think or thickly the artists applies the material. We did not find any conclusive results that proved that certain mediums created certain values, so we wanted to attempt to create an image.