Test Summary
In this test I attempted to get a more successful transfer using the Photoshop-altered paper printout that I produced in the last test. I prepared the image in the same manner, planning to be more careful with the rolling and wiping, as the last printout became creased and crumbled in the rolling, which may have affected its ability to transfer onto the copper. However, Sally and I suspected that perhaps the image did not transfer well because its overall neutral grayness does not hold enough toner to effectively retain the B.I.G. This test was designed to see if the image could yield a satisfactory transfer.

Plate Preparation
Using the printed image described in the last test, I prepared another copy, using 1 Tbsp Gum Arabic and 1 tsp of B.I.G. rolled out with a pea-sized amount of tack reducer (as in past experiments.) The rolling and sponging was successful. The paper did not crease and held up well at the edges. However, during rolling I realized I had not degreased the plate from the previous test. The printout, prepared with the B.I.G, sat for about five minutes while I degreased the plate using Bon Ami and soy sauce, then dried with newsprint. I transferred the image using the Charles Brand Press set to 0.19 pressure, with 2 sizing catchers and 4 sheets of newsprint. The transfer was light, but visible, with some details. I decided to etch the plate. I baked it at 250 Degrees Fahrenheit for six minutes, then allowed it to cure overnight. 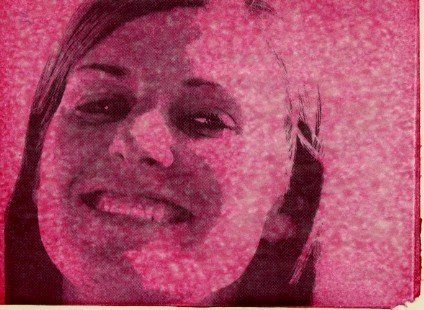 Etching Notes
I etched the plate for 25 minutes in 41 Deg. Baume Ferric Chloride. When I removed the plate from the bath nearly all of the ground was gone, with the exception of a few splotchy areas that slipped off easily in the stripper. The plate was foul-bitten and streaky. Some areas did etch, however, and the plate retained some of the information from the original image, such as splotches where the eyes would have been. I decided to see how the plate would proof.

Removal of Grounds
The ground came off primarily in the etching bath, with a brief soak in the stripper to remove the rest.

Inking Methods
I inked the plate with Graphic Chemical oil-based etching ink in Bone Black. I wiped the plate first with tarlatan, then hand-wiped with whiting. Upon wiping, much more of the etched dot pattern and remaining imagery became visible. The plate held more of the initial image than I though at first.

Test Conclusion
The proof did not show the level of detail that was visible on the plate upon inking. It appeared that there may not have been enough pressure, but the plate mark was good. Perhaps the etched marks were shallower than they appeared due to the foul-biting after the ground slipped off. The proof was very faint, and held little resemblance to the original image. It is likely that the ground fell off in etching because the plate was baked at too low a temperature. Also, it may be that the image is too gray to hold an adequate amount of B.I.G. to hold up in the bath. 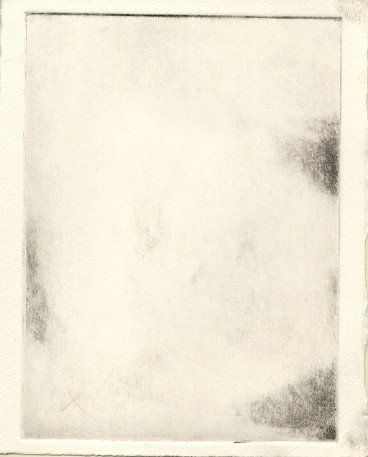