Test Summary
In this test we decided to experiment with using the Gum Arabic and BIG Photocopy transfer process on two different printed surfaces, in order to compare the effects. We each began with an identical photographic image, which we had manipulated using Photoshop (the steps we used to alter the image will follow in this section.) Sally used this image to conduct a transfer using a Polyester Lithography Pronto Plate. I utilized a paper matrix. We both printed our images on the Brother Laser printer mentioned in the abstract. Sally printer her Pronto Plate with the paper setting on “thick” and the toner conservation mode set to “off.” I noticed in previous experiments that we had not achieved a wide range of tones. I also noticed that darker toner areas on the photocopy tended to accumulate too much B.I.G, causing a resist which acted as a stop-out on the plate. So, when preparing the photograph for use in these tests, I altered it significantly to condense the range of tones to a few mid-range grays. I also sought to eliminate fine white lines, which often fill and print as black. My aim was to create an image with photographic quality, but with the characteristics necessary to be successful in the transfer process. The specific tools and techniques would vary depending on the original source image being used, but what follows are the changes I made using Adobe Photoshop: 1.) I first converted the image to black and white by selecting from the top menu “Image” then “Mode” then “Grayscale.” 2.)I evened out the mid-tones by selecting “Output Levels” under the “New Adjustment Layer- Levels” drop-down menu. I moved the black value number to 0 and the white to 222. 3.) Next I altered the Brightness and Contrast of the image to further eliminate variety of tone, while keeping the image recognizable. I selected the “New Adjustment Layer” drop-down menu, then chose “Brightness and Contrast.” I moved the Brightness to 15 and the Contrast to 68. 4.) I again altered the Output Levels, to further balance and even the tone and reduce the variety of grays. I selected “New Adjustment Layer” then “Levels” then “Output Levels.” I moved the black value to 115 and the white value to 255. 5.) At this point I flattened the layers of the image. To do this I selected the “Layer” drop-down menu, then “Flatten Image.” 6.) After flattening the layers, I was able to use the brush tool on the surface to eliminate problematic fine white lines. To do this I used the color sampling dropper on the brush tool to select the darkest gray in the hair. I brushed with this gray over any unwanted lines. I also used the brush tool at this time whiten the highlights on the eyes. Sally and I printed the image twice, once on regular printer paper and once on Pronto Plate. We both printed on a toner-printer. This test describes the trial on paper.

Plate Preparation
I degreased the plate alternating Bon Ami and soy sauce. I then prepared a slab of 1 tsp B.I.G. with a pea-sized amount of tack reducer. Simultaneously, I spread 1 Tbsp of Gum Arabic thinly on a glass surface. I used the residual Gum to saturate the paper printout, then moved it to a clean place on the glass and rolled it with the B.I.G. mixture. After rolling I sponged the B.I.G. off of the printout, leaving ground stuck to the toner areas. The paper stuck to the brayer during rolling, causing wrinkles that held B.I.G. and weak spots that broke down and peeled during sponging. I applied the paper to the prepared plate and ran it through the Charles Brand Press at 0.19 pressure with 2 sizing catchers, and 4 sheets of newsprint. The transfer was poor. There was very little B.I.G. on the plate, and the image was barely visible. I decided to wash the plate and try again without baking or etching. 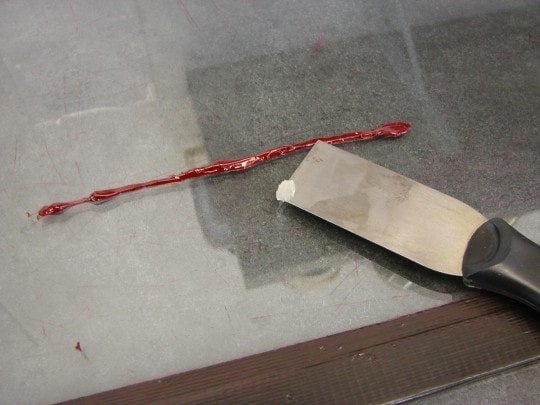 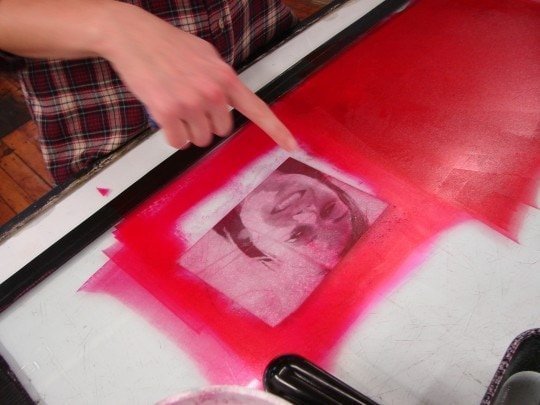 Rolling the photocopy with BIG 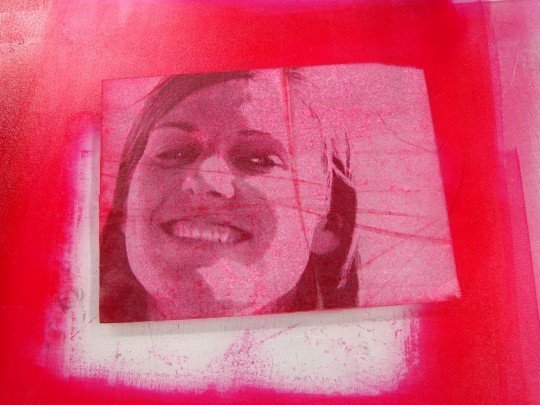 The photocopy was poorly rolled, and yielded a weak transfer 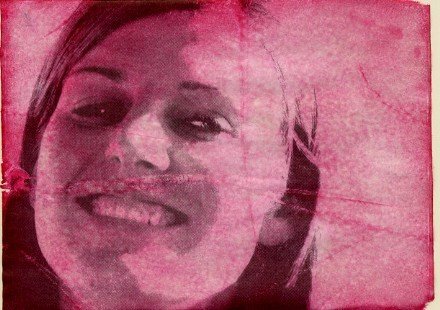