Test Summary
In this test, we set out to replicate the success we had in test number three, but using the photocopy from tests one and two. The portrait we used in test three was higher contrast, less detailed, and taken from a black and white source. The steak image we used in tests one and two had a wide variety of tone, more intricate detail, and was taken from a color source. We wanted to know if using the same amount of Gum Arabic and the same techniques would give us the same fidelity that we achieved in proof number 3.

Plate Preparation
We degreased the plate alternating Bon Ami and soy sauce using a gloved finger. We then applied 1 tablespoon of Gum Arabic to a glass plate, and spread it around to cover, until it was free of large puddles. We placed the photocopy on the gummed glass and applied the excess Gum to the surface of the photocopy. We did not wipe away the excess Gum too thoroughly (in keeping with the success we had in the last experiment.)

After this, we mixed a field of 1 teaspoon red BIG with with 1 pea-sized dollop of tack reducer. We rolled the modified BIG onto the photocopy, rolling from the center outward to prevent sticking and wrinkling. After rolling thoroughly, we were careful to sponge the entire photocopy, to clear the white areas and prevent build-up of BIG in the toner areas (that in the past has led to stop-outs.)

Next, we transferred the BIG to the prepared copper plate by running the copper plate (with the photocopy face down on the surface) through the Charles Brand press with two sizing catchers and one sheet of newsprint (folded.) We ran it through first at 2.5 pressure, but this did not feel tight enough. So, without altering the set-up, we ran it through again at 2.0 pressure.

Finally, we baked the plate for six minutes with the oven at 325 degrees Fahrenheit. We suspect that the oven did not have adequate time to pre-heat. After, we let the plate rest for exactly 30 minutes. 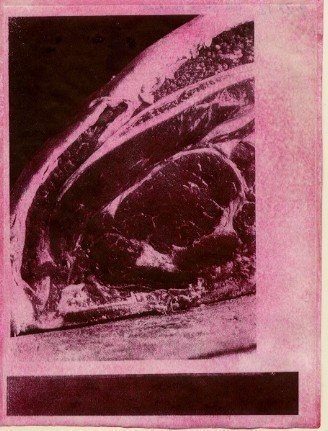 Etching Notes
We etched the plate in 41 deg Baume Ferric Chloride for 30 minutes. When we removed the plate, we immediately rinsed it with waterMost of the ground flaked off under the pressure from the faucet. By the time we finished rinsing the plate, the ground was completely gone. We did still place the plate briefly in the stripper, then rinsed it again with water. The plate did appear to be etched.

Removal of Grounds
The ground was completely removed in the post-Ferric water rinse.

After Bath Evaluation
The image appeared to have etched, though the open-bit areas did feel rougher than in past proofs. 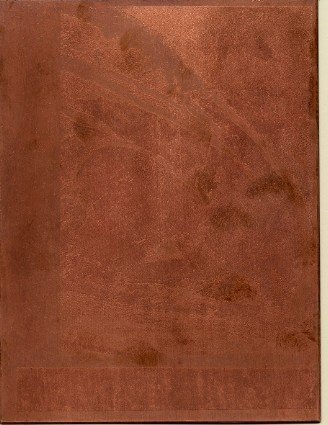 Inking Methods
We inked the plate with Graphic Chemical Bone Black oil-based etching ink, using a mat board chip. We then wiped it in circles using a wad of tarlatan. After, we hand-wiped it with whiting.

Test Conclusion
The major complication with this experiment was the ground flaking off in (or shortly after) the etching bath. Because of this, it is impossible for us to tell if the splotchy, irregular areas of tone are the result of foul biting or some human error in another phase of the process. It is also not yet possible for us to determine the success of the experiment. We did not achieve the same success as in test 2, but this could be the result of the weakened ground. We speculate that the ground was weak because we did not allow the oven enough time to pre-heat before inserting the plate. Also, in past experiments we have allowed the plate to rest for longer than 30 minutes after baking. Whatever the reason, the resulting proof was not as successful as we hoped. The tonal areas are splotchy and mottled. The open-bit areas are rougher than in past proofs, and held ink. We achieved some detail, but many of the fine lines printed black. In addition, the whole plate is streaked with linear striations. For our next experiment, we will attempt to get a proof that more faithfully replicates our starting photocopy by selecting an image that has higher contrast and fewer tiny details. We believe that despite our difficulties with the ground in this test, the quality of the proofs has been consistently poor. Our best success has been with a higher contrast, lower detail image. We will experiment to get the best tone and detail we can with another image. 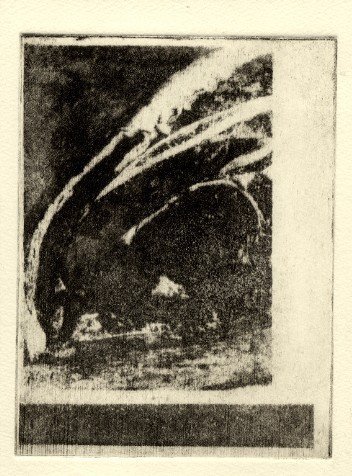