Test Summary
In this experiment, we set out to test the amount of Gum Arabic we applied to the photocopied image before transferring it onto the copper plate.

Plate Preparation
We degreased the plate with alternating applications of Bon Ami and soy sauce, rubbed on with gloved hands. We then rinsed the plate under water, deoxidized (in a solution of 1 gallon white distilled vinegar to 1 cup salt) and dried with newsprint.

After degreasing, we used visual estimation to apply 1 tablespoon of Gum Arabic to a piece of glass. We used our hands to spread the gum evenly over the glass until we saw no puddles. We then laid down another photocopy of the same image used in Experiment 1, and used residual Gum from the glass to coat its surface. We noticed that the Gum was not coating the photocopy evenly, but seemed to be pulling away from some of the toner areas, resulting in some dry patches.

Meanwhile, we mixed 1 teaspoon of red B.I.G. with a pea-sized quantity of tack reducer, placed the photocopy onto the glass rolling surface, and rolled on a thin layer of ground. The photocopy did not stick to the roller. The paper maintained its integrity, and did not tear or flake. We rolled the image approximately 8 or 9 times. We did use a finger to hold the image down at one point, and will see if this leads again to an etched fingerprint.

After rolling, we wiped the plate gently with a clean, damp sponge. the BIG came away cleanly, leaving whiter whites than in our previous tests. Yet, the BIG remained thick and somewhat splotchy in the toner areas.

After wiping, we placed the B.I.G. coated photocopy face down onto a the prepared copper plate. We had forgotten to prep the press, so the photocopy remained on the plate for about ten minutes before we were ready. We used the Pelican press with one sizing catcher, one pusher and two sheets of newsprint, pressure 1.0. The BIG transferred to the plate successfully, with good detail in the light areas, but splotchy application in the toner areas. A wide strip of the photocopy had become stuck to the plate, presumably due to the long wait between laying down the photocopy and transferring the plate. We decided to leave the residual stuck paper on the plate to see what would happen in etching. There was also one obvious fingerprint in the ground. 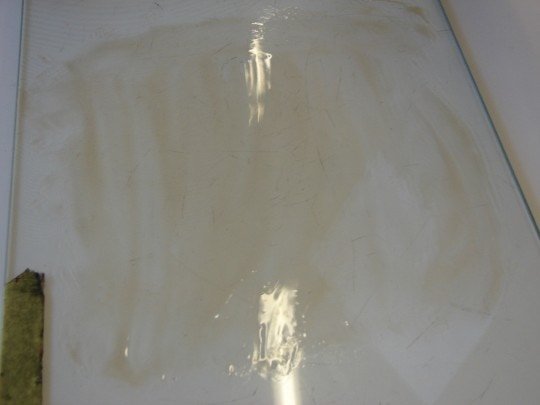 Gum spread out thinly, with no puddles 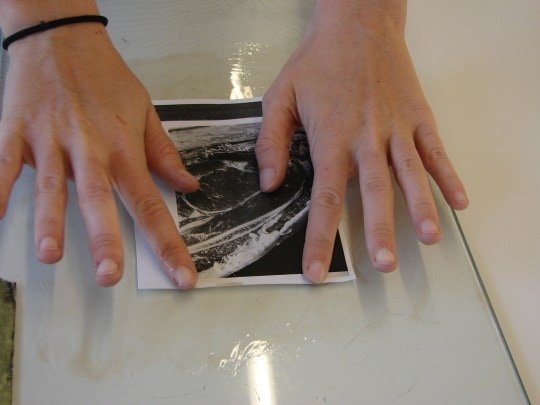 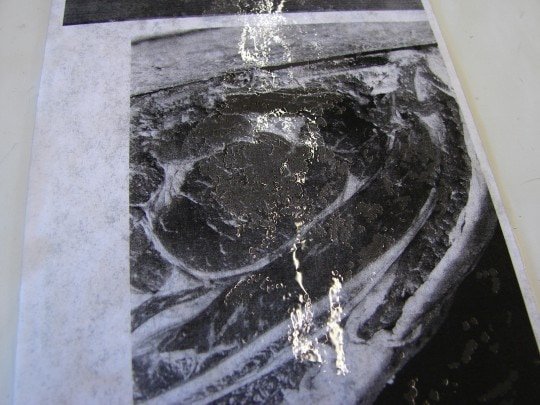 Gum recedes from some toner areas 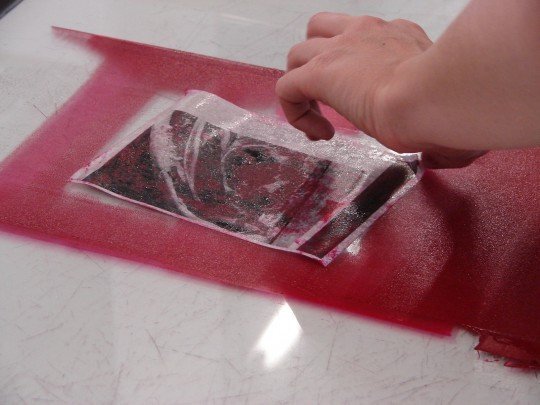 Rolling on the BIG 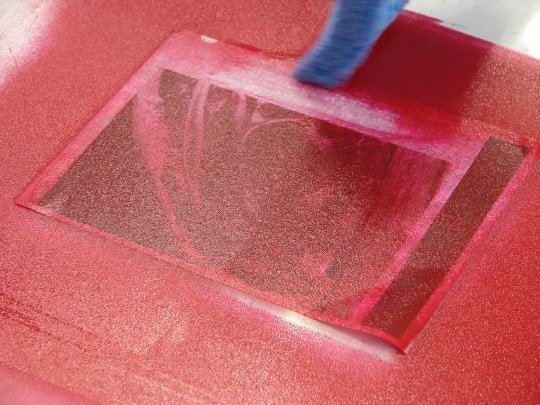 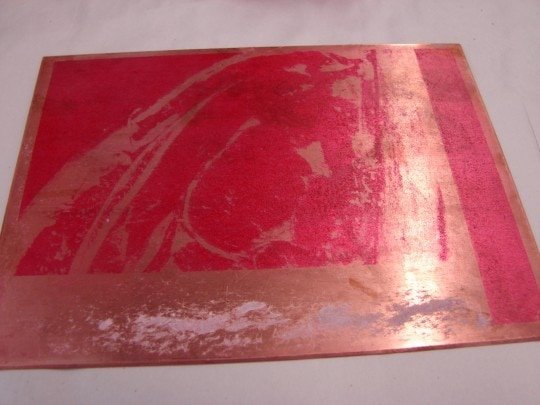 The plate, after transferring the BIG

Etching Notes
We etched the plate in 41 deg Baume Ferric Chloride for 30 minutes, then rinsed and deoxidized.

Removal of Grounds
The ground was very difficult to remove, due to prolonged baking time. We cleaned it off using Soy Solv, and Bon Ami with a toothbrush, nail brush and rags. 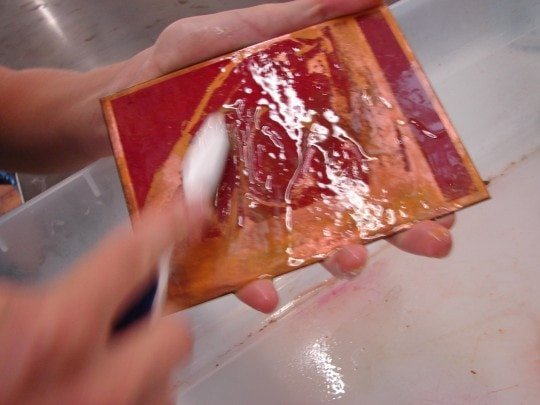 Removal of ground with Soy Solv and a toothbrush

After Bath Evaluation
The detail on the plate appears to be good, with crisp lines. Some of the paper that was stuck to the plate remained after etching. In that area, etching was not complete. We brushed off the remaining paper in the rinse water. 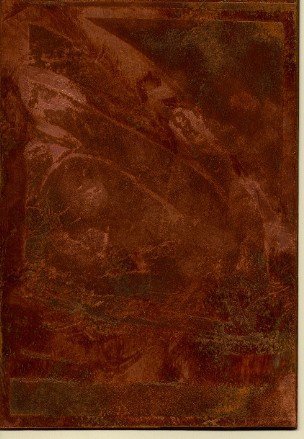 The plate after ground removal

Inking Methods
We inked the plate using Graphic Chemical Bone Black oil-based ink, applied with a matte-board chip. We then wiped the plate in small, circular motions using a wad of tarlatan. Finally, we hand-wiped using talc. During wiping we noticed that the plate had inked differently than we had expected it would. What had been dark toner areas on the photocopy inked very lightly. There was also a scratched and mottled streak where the newsprint has stuck to the plate. 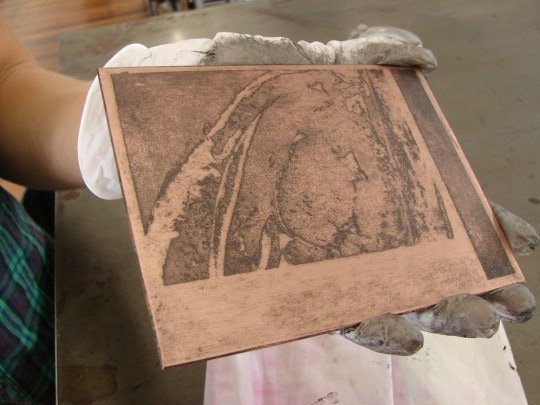 Test Conclusion
In this print, the BIG acted more as a resist than an aquatint. This is probably due to the reduced amount of Gum Arabic. Less Gum helped the photocopy retain its integrity, and the BIG to wipe clean from the whites, but it also allowed the BIG to stick too well to the toner areas. This caused large stop-out areas and an overall lightness to the final print. We will continue to investigate the appropriate amount of Gum. In our next test, we will measure the Gum, instead of estimating. This will allow us to be certain of our variables, and reproduce the results. 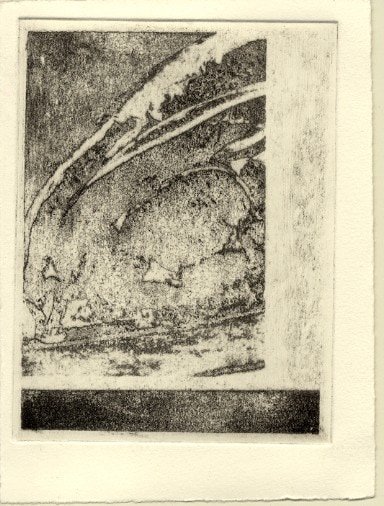