September 15, 2015
Researchers: Stephanie Motyka, Kristina Key
Room Temperature: 77º F
Humidity: low humid
Materials: Copper plates, Soy Wax Soft Ground (Soy Wax & Litho Ink), Zea Mays Acrylic Stop Out, 12.5º baume ferric chloride, different mark making tools.
Abstract: Pushing the boundaries of the Soy Wax Litho Ink Soft Ground by testing the amount of time a plate using the soft ground can be etched. We want to find out how short and how long a plate using the ground can be etched to get a variety of marks or until the ground begins to break down in the ferric. Prior to this, the amount of time recommended was 15-30min in a 12.5º baume ferric bath

Procedure:
We prepared two copper plates by polishing and then degreasing with soy sauce. We applied the soft ground on a hot plate set at 110º F using a brayer solely designated for the soft ground. After it cooled we used a variety of mark making tools to create different lines and textures on the plates (specified in the images). Some of the marks were applied directly to the plate while others were created through a newsprint. The tools we used to create marks include: roulette wheels, etching needle, dental tool, wire brush, small scraper, toothpick, scrubby pad, needle, finger prints, ball burnisher, Q tip, and toothbrush. 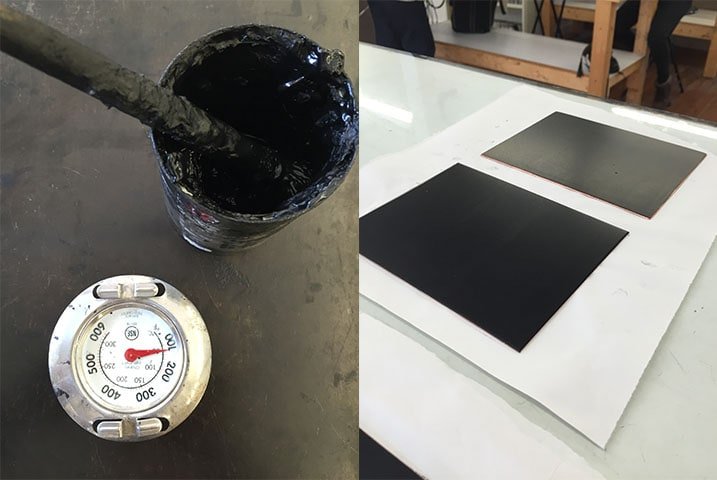 1) Soft ground warming up on the hot plate set to 110 degrees F. 2) The plates cooling after soft ground was applied 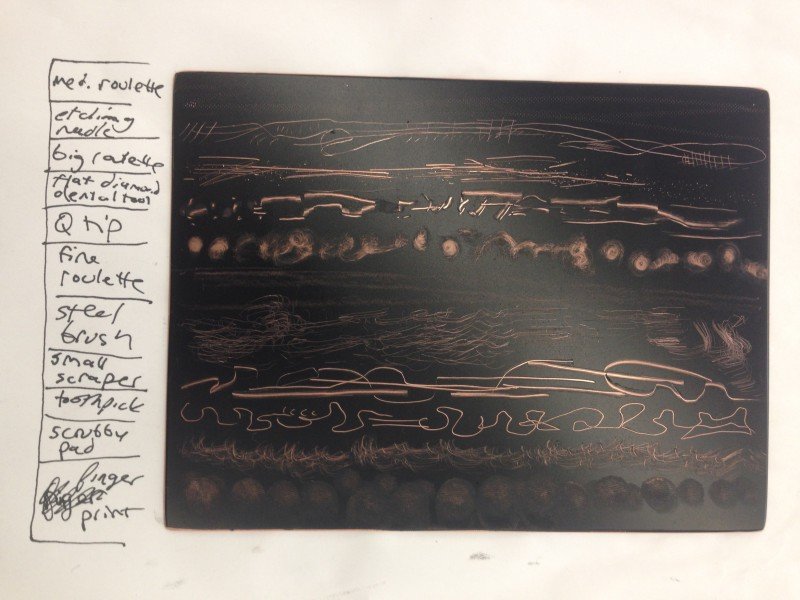 Kristina’s plate with marks in the soft ground 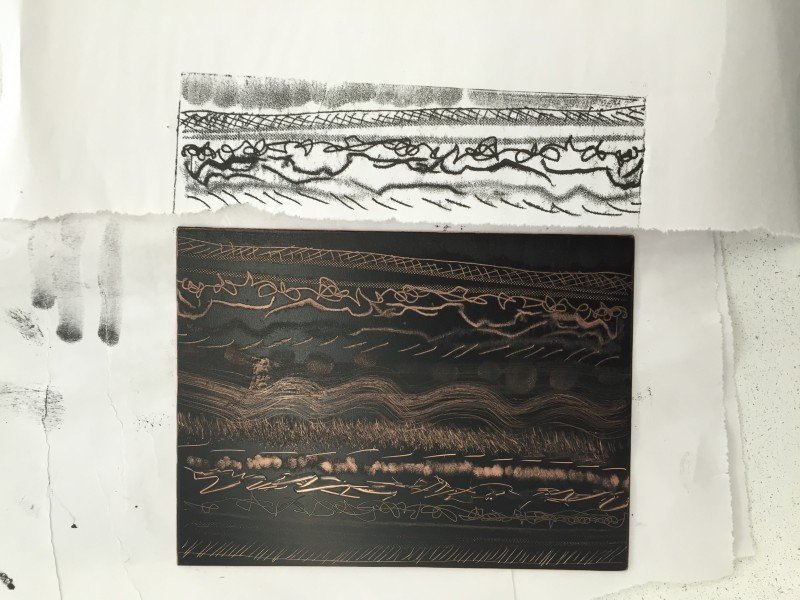 In order to test different increments of etching time, Kristina’s plate was etched at 1min, 3min, 5, 10, 15, 20, 25. Stephanie’s plate was etched at a constant 25min then stage bitten to 30min, 35, 45. The test was stopped after 45min to be picked up later for the 55min, 60min, and 75min. It was important to have overlap with our plates at 25min because while Kristina’s was stage bitten and stopped out up until 25min, Stephanie’s was in the bath at 25min from the start of the test.

We had to prepare a 12.5º baume horizontal bath for this test by pouring the ferric into a photo tray. The rinse bath was right next to this bath. 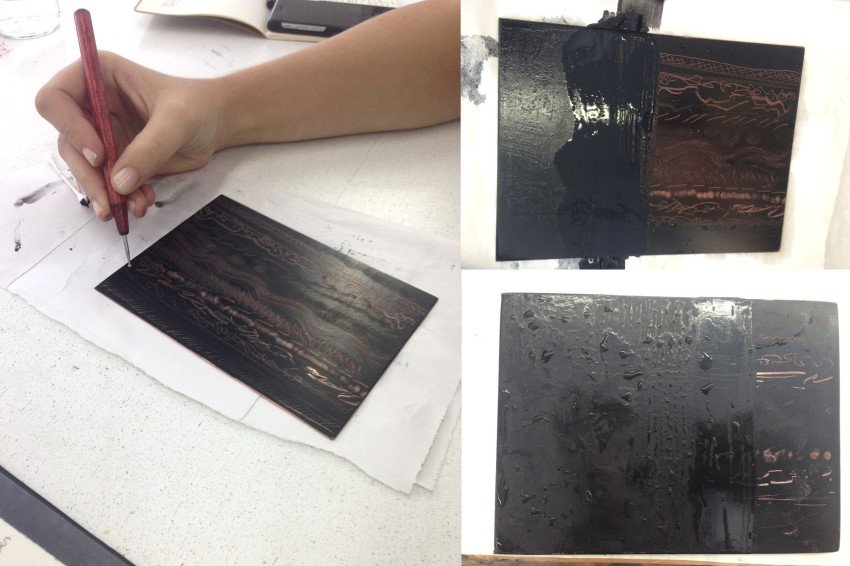 Drawing directly onto the plate, stopping out with the acrylic stop out, and after being in the bath and rinsed.

Kristina’s plate was first etched for 1min and then taken out, rinsed, dried with a hairdryer and stopped out to be put back in for 2 more minutes for a total of 3 minutes. We then repeated the previous steps of timing, taking it out, rinsing, drying, stopping out. This continued for all of her intervals: 5min, 10min, 15min, 20min, 25min. Between 10 and 15min etch, the stop out appeared to be breaking down around the edges of the first applied stop out over the 1min etch. Kristina spot touched-up the area when she stopped out for the 15min etch.

1) rinse bath, 2) stopping out 1 inch stripe after drying with hairdryer, 3) drying the stop out with hair dryer.

Stephanie’s plate was in the bath for 25min before beginning the stage biting process. We noticed the ferric was slightly foul bitting the areas stopped out over the marks made. So, after the 30min etch, we applied two coats of stop out with drying in-between coats. The 25min etch on Stephanie’s plate might be off due to this but Kristina’s still has a 25min area to compare. 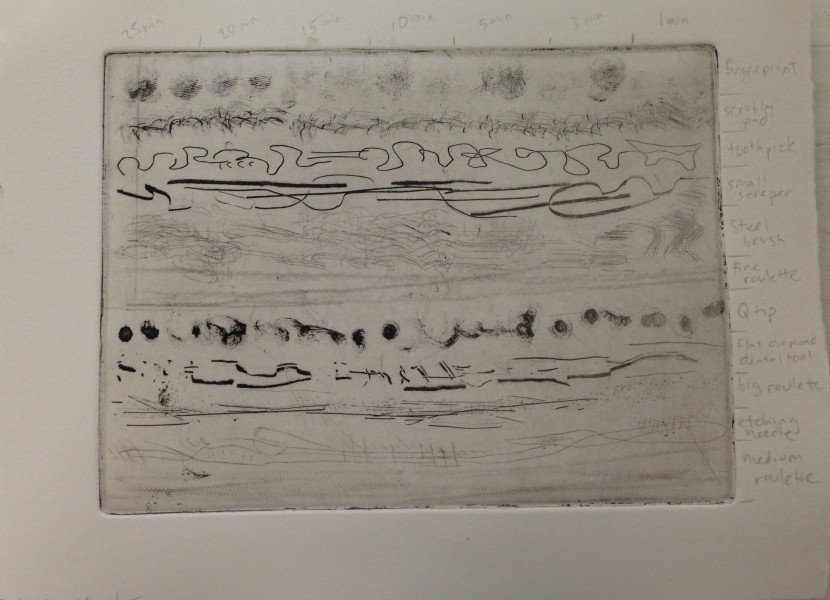 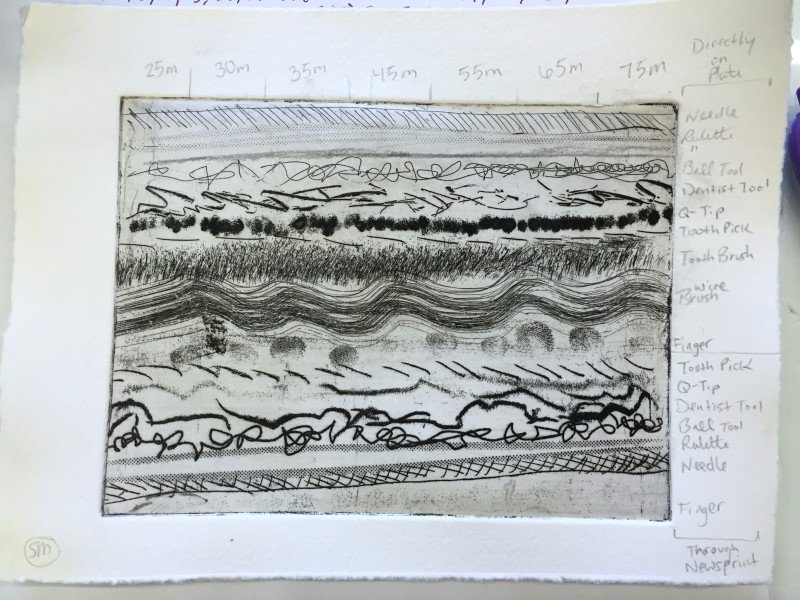 Conclusions:
The ferric was penetrating areas already etched while etching the plate after it was just stopped out. After the 30 minute etch, we put down a second coat of acrylic stop out and dried it with the hair dryer thoroughly. This helped protect the previously etched areas from getting foul bitten. The ground held up all the way through the 75 minute etch and could potentially go even longer if needed. The line qualities and marks etched appeared to plateau around 40/45 minutes.

The stop out stayed on Stephanie’s plate for a week before we finished etching and removed it. This made it much more difficult to remove. We had to replace the stripper bath to ensure it was at its strongest. Even then, we need to scrub quite a bit with the toothbrush to remove the acrylic stop out completely.