Test Summary
I am testing a soft ground mixture that consists of 3 parts Graphic Chemical Water based Block Printing Ink Peacock Blue, 2 parts Golden Acrylic Silkscreen Medium, and 1/2 part Golden GAC 200. In am using newsprint as the transfer paper. The ink was refrigerated in hopes of extending the drawing time of the ground.

Plate Preparation
I degreased the plate with Bon-Ami and water made into a paste. The paste was rubbed across the plate surface and rinsed away with water. The copper plate was blow dried and finished with a clean towel. I rolled a thin amount of ground across the plate’s surface just enough so that I could not see the copper sparkle through the ground. I waited 10 minutes before placing the newsprint onto the grounded copper plate. I drew for 40 minutes near an open window before the ground became too difficult to draw through. The surface of the plate became smudgy and predictably more difficult to work as time progressed.

Etching Notes
The plate was etched in a vertical etching tank filled with 35° Baume Ferric Chloride.

Removal of Grounds
The ground was removed using a stripper bath of Arm & Hammer Washing Soda and water (100 grams/1 liter). I rinsed the plate under warm water after soaking it in the stripper bath for 10 minutes. 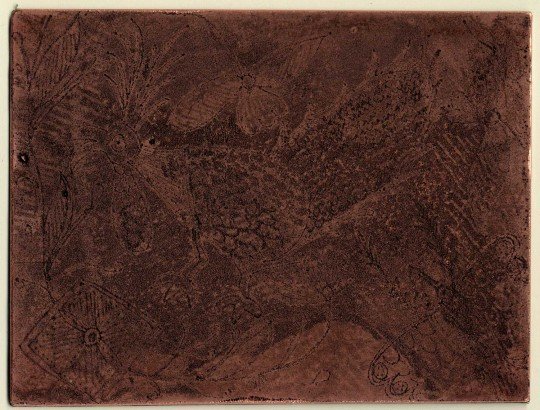 Test Conclusion
The print failed because of a mistake drying the ground on the copper plate. 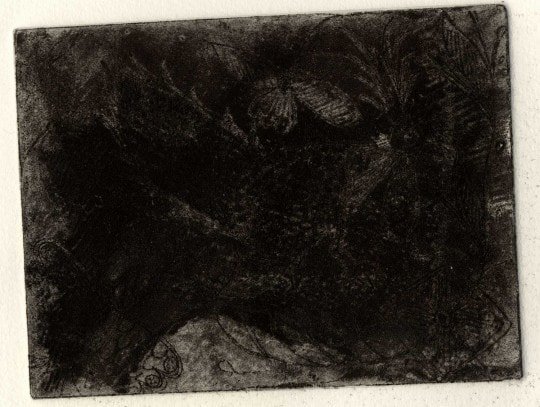