Using our observations from Experiment #2, we decided to start with a 1:24 ratio of sodium alginate to Future floor polish because this ratio produced a solution with the right combination of fluidity and thickness for a ground.

To begin the experiment we mixed ½ tbs of Sodium alginate and ¾ cup of Zea Mays Stop out to achieve a 1:24 ratio.

This mixture was not fluid like we expected. It immediately started clumping up and became thicker than we anticipated. We hypothesized the different results were due to addition of Gac 100, which is part of the stop out mixture. The Gac 100 was not included in our first test with a 1:24 ratio. In the first test, just future floor polish was mixed with sodium alginate. We let the sodium alginate and stop out mixture sit for three hours to see if over time the clumps would dissolve.

After three hours of sitting with periodic stirring, the mixture was still very lumpy and thick. This ratio,1 part sodium alginate to 24 parts stop out, is too thick to be a pour on or paint on ground. Because of these results we modified our test to include ratios with a greater amount of stop out to sodium alginate. The table below illustrates our tests:

We let all mixtures sit for 2 hours, mixing periodically to break up clumps. 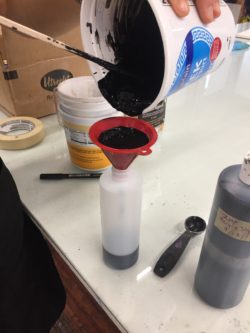 After reviewing our observations we decided to remove the 1:36 ratio from our testing because it was too thick to be either an effective pour on ground or paint on ground. We prepared four copper plates by beveling all edges, buffing the surfaces using first a scouring pad followed by steel wool, then we degreased using Bon Ami and soy sauce. After our plates were buffed and degreased, we applied the 1:48 and 1:96 sodium alginate and stop out solutions to the plates as follows: 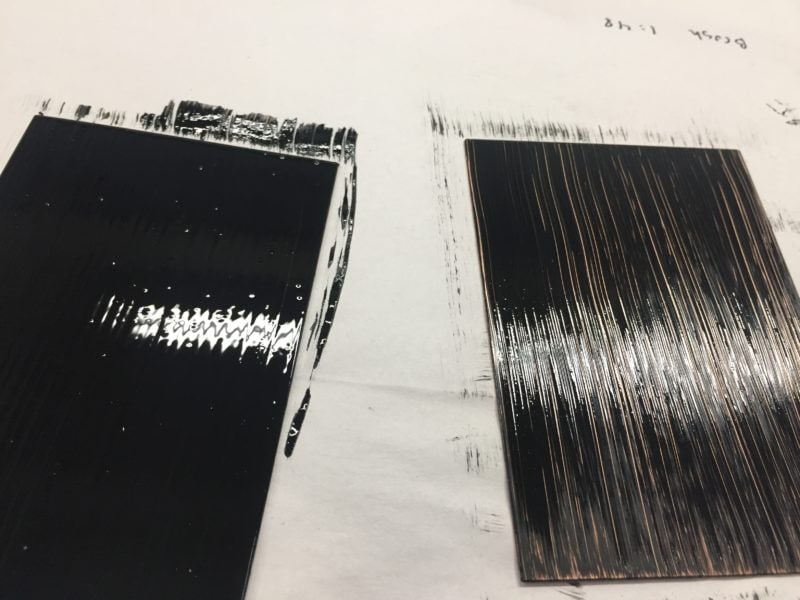 Plate #1, 1:48 painted on air dried, and Plate #3, 1:96 poured on air dried; were both observed to be too thick to draw into. We took an etching needle and drew through the plates and noticed the needle catching and tearing the surface, rather than easily drawing through it. Therefore, we removed Plate #1 and #3 from our research.

We continued to test Plate #2, 1:96 painted on air dried, and Plate #4, 1:96 painted on heat dried. To test these plates we drew on them with etching needles. It was clear that the heat set plate (Plate #4) was harder to draw through compared to the air dry plate (Plate #2). The etching needle would have resistance and skip as it was drawn into the Plate #4, but it would more fluidly draw through plate #2. 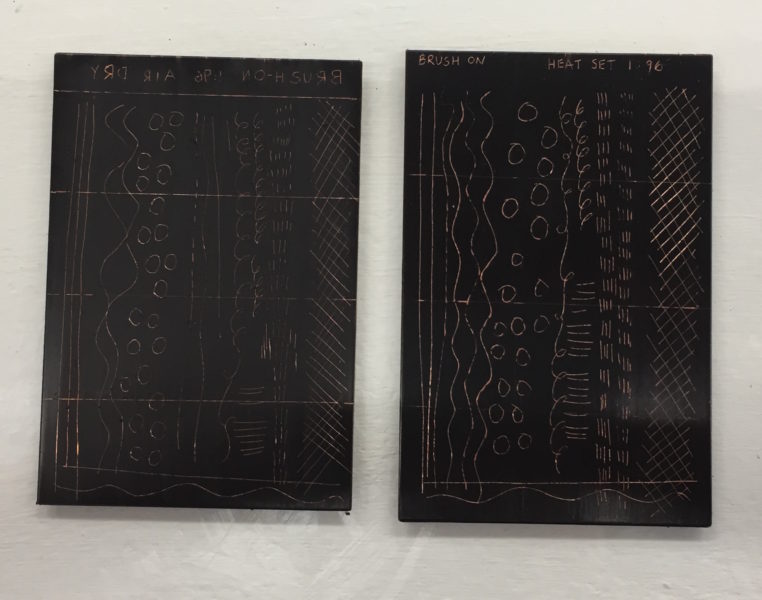 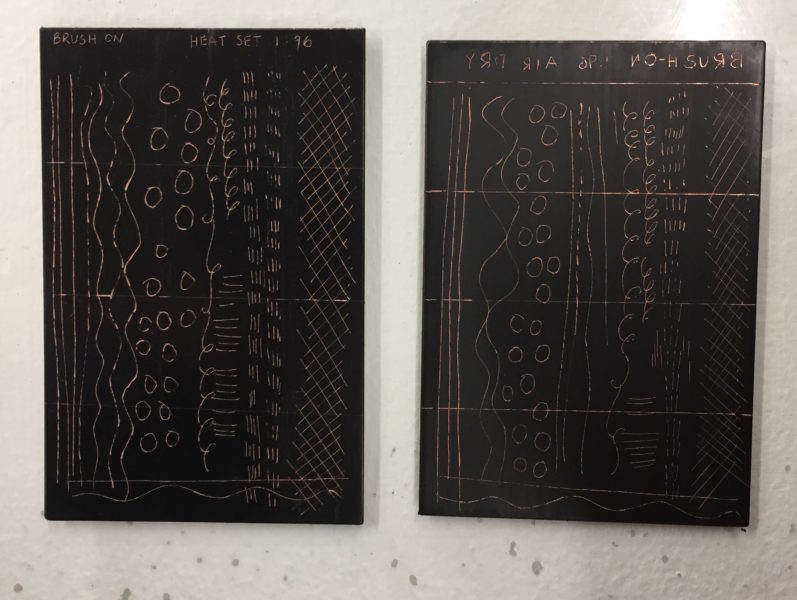 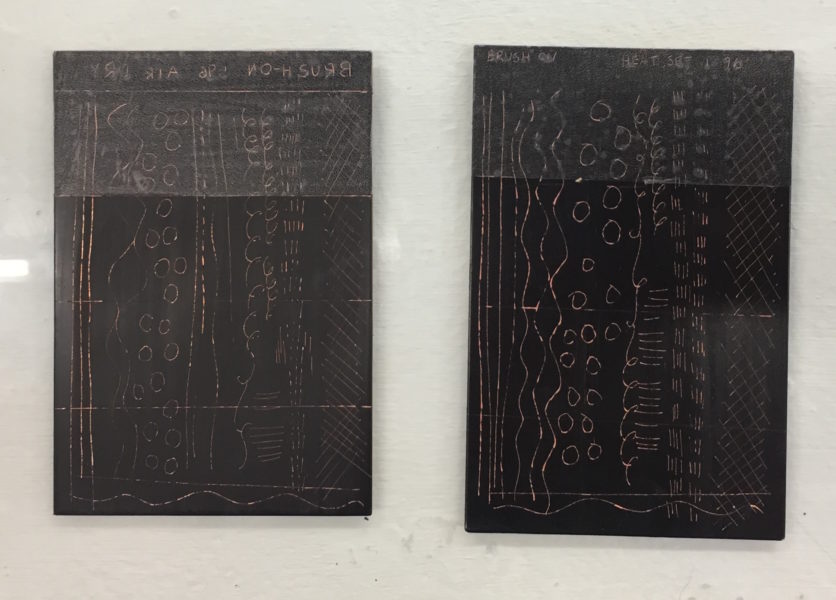 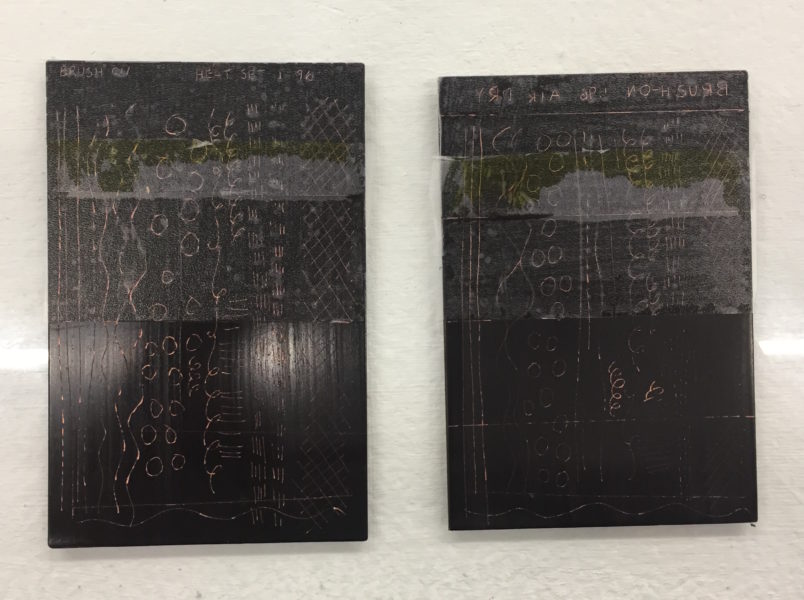 Once etched the plates were stripped in sodium Carbonate. Plate #4 took twice as long, roughly 30 mins total, to strip. 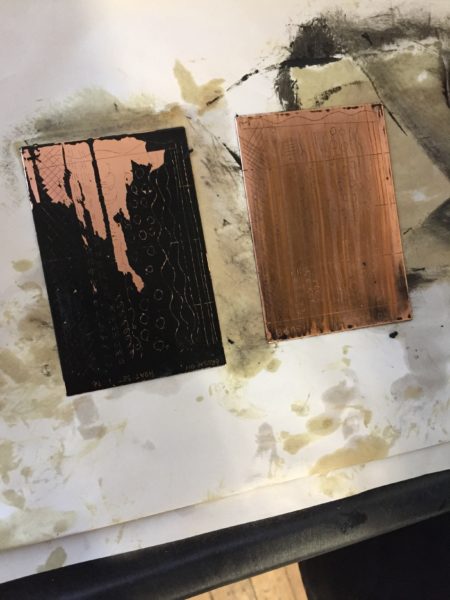 We modified the ink very slightly and carded the ink onto the plate with matte board and then wiped both plates using tarlatan followed by newsprint to remove any residual plate tone. We soaked the paper Hahnemuhle copperplate for 15 mins then blotted it dry between two towels before printing.

The results of the prints showed the difference between the two grounds well. The skipping and difficulty of drawing through the heat set ground is evident in the thickness and inconsistent printed marks. The lines printed from plate #2 are sharper, thinner and more consistent. From this test we concluded that air drying the sodium alginate acrylic hard ground creates a better drawing surface. 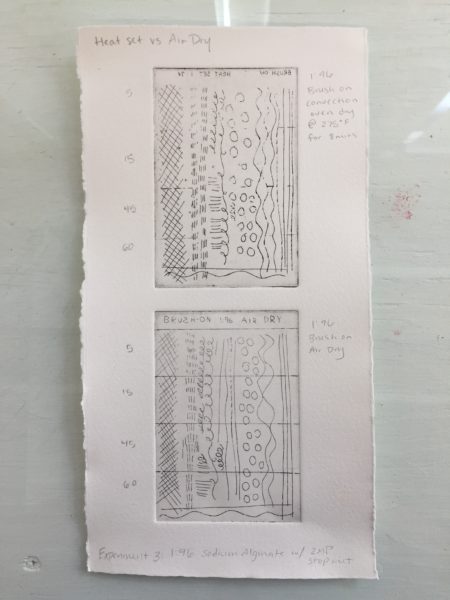