Experiment:
This experiment was designed to give us a baseline to work off of. We wanted to see how the ZMP stop out worked as a hardground; does it crack when drawn into, does it stand up to step etching, does it pour on well? With an understanding of how the stop out works as a ground, we can compare future experiments where we mix the sodium alginate with the stop out and use it as a ground, to track any differences.

Plate preparation:
We beveled the edges of two 3”X 9” copper plates, applied a backing sheet and then de-greased each, using first Bon Ami, followed by soy sauce to remove grease and oxidation. We were looking for water to form a smooth sheet across the whole plate surface, which signals that there were no areas where grease was repelling water. Plate #1 was complete after degreasing. Plate #2, after degreasing,  was then lightly buffed using steel wool to create a matte surface. 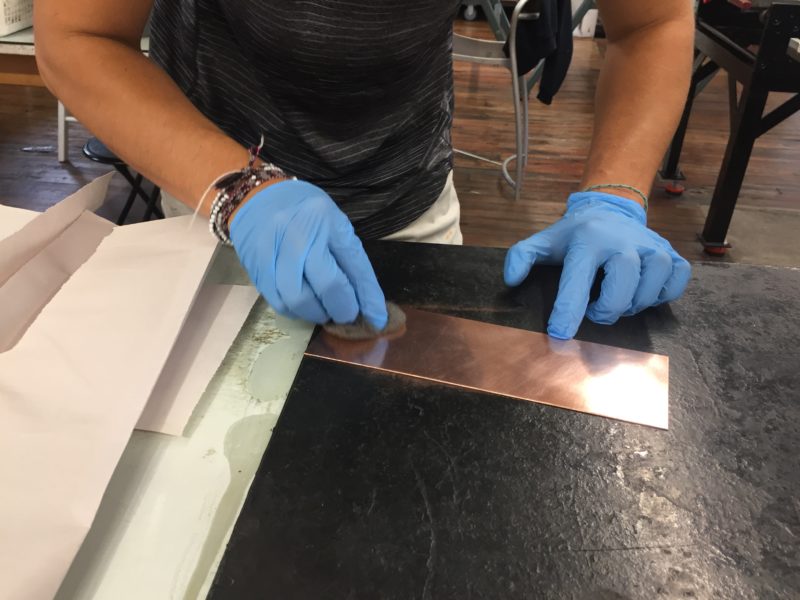 After the plates were prepared, we then took a bottle of ZMP stop out and poured it over the plates; first over plate #1, then over plate #2. The plates were both tipped at a rough 45 degree angle and the stop out was poured in one direction, from the top of the plate to the bottom, to reduce any dripping effects that might interfere with creating a smooth hard ground surface. 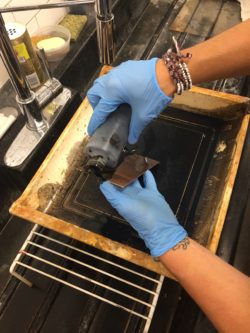 Pouring on Zea Mays stop out. 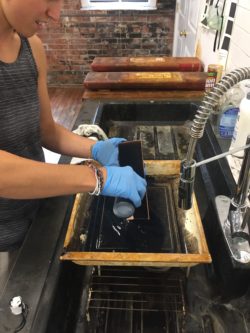 Pouring on stop out.

After the plates’ surface was fully flow coated with the stop out, we set them against a wall to dry. They were set up with the top of the plate being the end that the stop out was poured from. The plates were dry to touch after 1 hour. It was clear from observation of color that the tops of both plates had a thinner coat of stop out (signaled by more copper color) and the bottoms, where the stop out was flowing towards, had a slightly thicker coating (signaled by a blacker color). We used etching needles to divide both plates into 5 sections corresponding to the times; 5, 15, 30, 45, and 60 mins. We then drew into the plates using the etching needle. 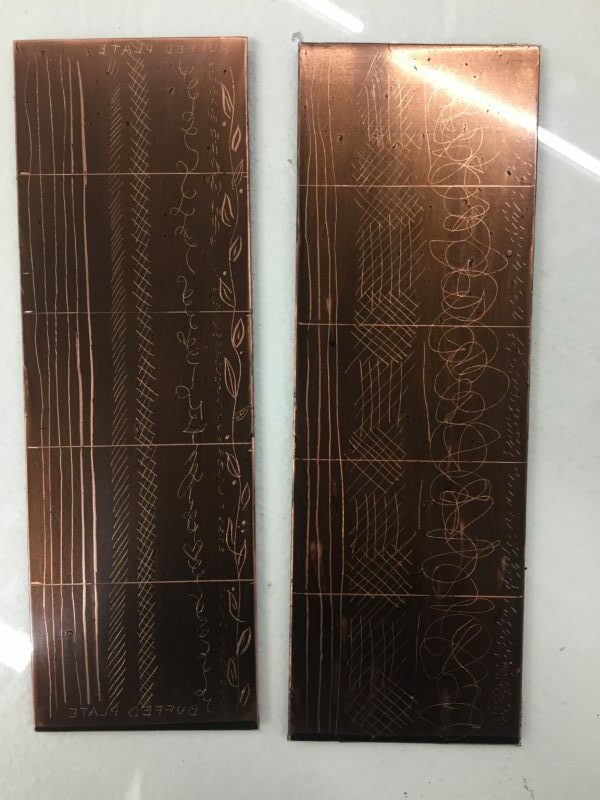 Drawn on, un-etched plates with stop out as hard ground.

Once we were finished drawing into the plates, we put both plates into a ferric chloride bath  at 39 degree bomae for 5 mins. After 5 mins, we rinsed the plates under water to remove any residual mordant and dried them using newsprint. The stop out ground held up to the etching, rinsing and drying processes. Once both plates were dry, we put a strip of clear tape over the top segment to prevent it from being etched as we continued our experiment. 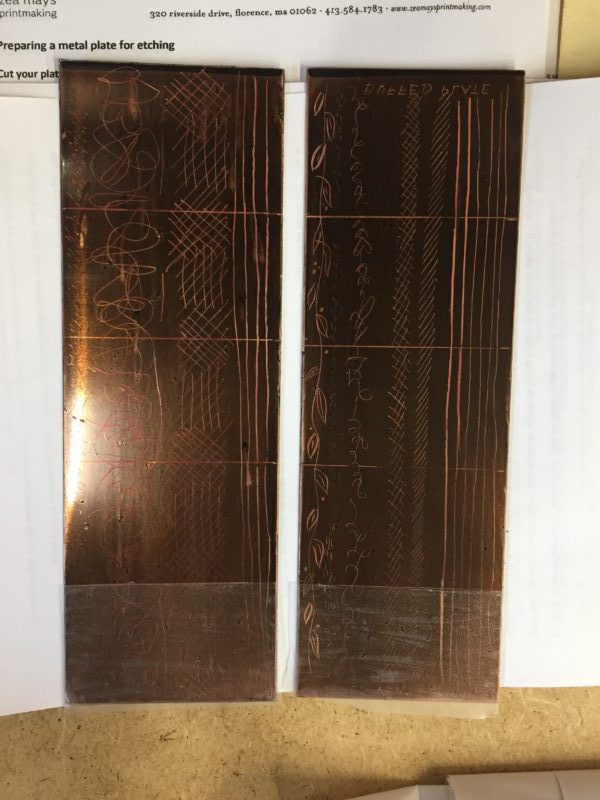 After 5 mins in Ferric Chloride.

We picked up where we had left off on 9/13 and began etching both plates for 10 mins. The Ferric Chloride measured 38 degrees baume. After 10 mins we took both plates out, rinsed them under water, dried them using newsprint and covered the section using contact paper. Then we put the plates back into the mordant for 15 mins and repeated this process until we had a plate with step etching of 5, 15, 30, 45 and 60 mins. It was clear that the longer the etching time, the wider the lines we drew got and the more jagged their edges became. 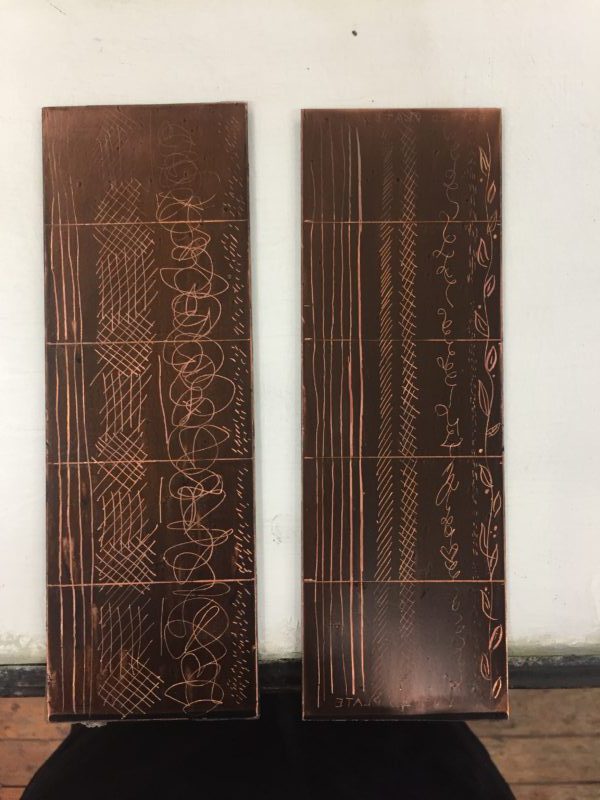 Completed step etching. Etching times start with 5 mins on the left and end with 60 mins on the right.

We removed the contact paper from the front and back of the plates, then placed them into the stripper bath (sodium carbonate and water) for a total of 15 mins to remove all of the ground. Then we sprayed the plates with Seventh Generation all natural cleaner. Then, they were ready to ink and print.

We modified the ink very slightly and carded the ink onto the plate with mat board and then wiped both plates using tarlatan followed by newsprint to remove any residual plate tone. We soaked the paper Hahnemuhle copperplate for 15 mins then blotted it dry between two towels before printing. The results of the prints were good. The lines printed clearly with no fowl biting. It was clear that the lines printed thicker the longer the etching time. 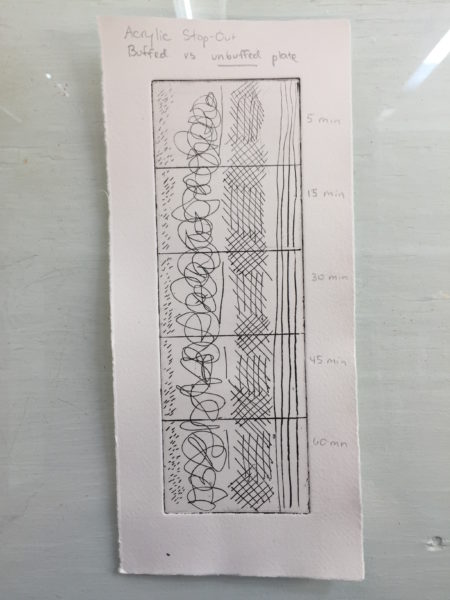 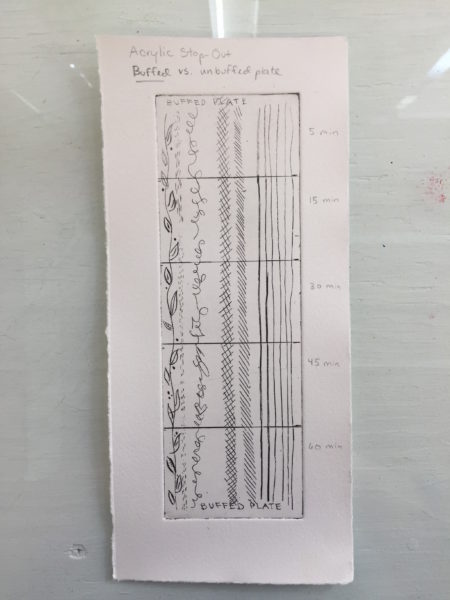 Acrylic Stop Out on buffed copper