Test Summary
This is the second part of the sixth test where the ground was removed after two etches and is now replaced with a new ground for the next two etches.

Plate Preparation
The copper plate was polished with Putz Pomade, steel wool, and a scraper to remove large marks. The plate was degreased with soy sauce that was rubbed onto the copper plate using a piece of rolled felt, rinsed and then dried with a clean rag and blow dryer. The BIG ground was applied using a hand roller and hardened in the oven at 220 degrees for 10 minutes. On the plate we laid 400 grit sandpaper face down and ran it through the etching press for a total of 8 times. After each pass we slightly turned the sandpaper in a clockwise motion to ensure an even impression. After 4 passes the sandpaper was removed and replaced with a new piece. We stopped out areas using Z-Acryl and litho crayon. The Z-acryl began pooling but the addition of a second coat fixed this issue.

Etching Notes
The plate was rinsed well under-water after prepping the aquatint at the press. The plate was etched in a vertical etching tank of 38Â° Baume Ferric Chloride for a total of 20 minutes.

Timed Application of Mordant
The copper plate was etched twice. After the first 10 minutes we took the plate out of the bath, rinsed it under running water, and stopped out areas with Z-Acryl and litho crayon. After the Z-Acryl air dried we placed the plate back in the bath to etch for an additional 10 minutes.

Removal of Grounds
The ground was removed with a clean rag, Soy Solve, and Simple Green. We used alcohol to remove the Z-Acryl stop-out, which became difficult in areas were we applied more than one coat. After we removed BIG the plates were rinsed in water and deoxidized in the plate brightener bath made of distilled white vinegar and salt (1 gallon/1 cup). It took a few applications and a toothbrush to scrub the ground completely off.

After Bath Evaluation
The BIG ground held up well and did not degrade. After we removed the ground the plate appeared to have differences in even tone consistent with our timed step etches. 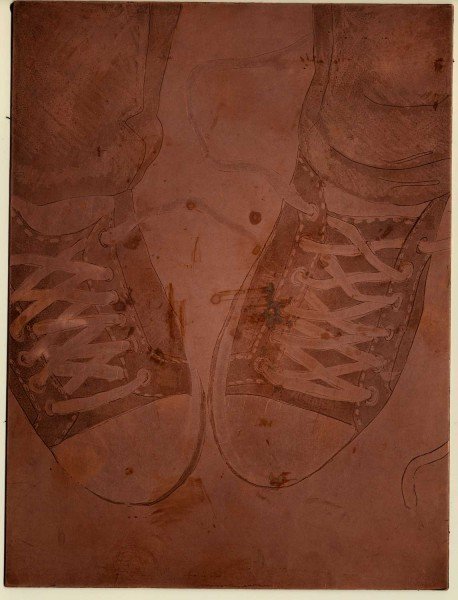 Inking Methods
he plate was inked using Daniel Smith Creamy French Black thinned with a drop of #00 burnt plate oil. The ink was carded on with mat board scraps, wiped in gentle circular motions with used tarlatan, and then palm wiped.

Test Conclusion
The 20 and 30 minute areas are well-differentiated. Replacing the ground made a noticeable difference in producing a successful aquatint for doing multiple timed etches. 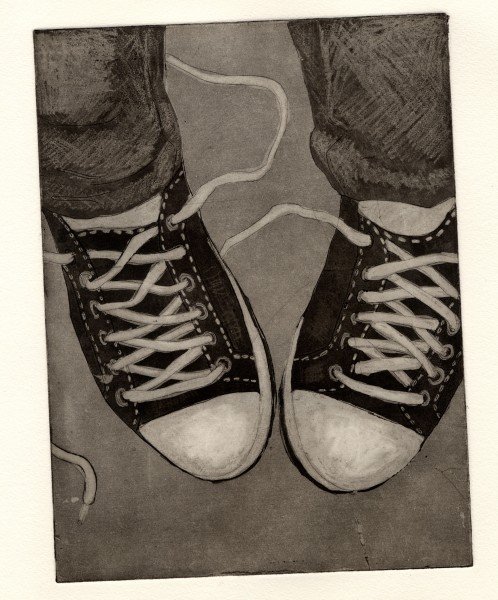