Test Summary
In this test we experimented with a 400 grit sandpaper impression into the BIG ground to create an aquatint. The sandpaper was replaced with a fresh piece halfway through the 8 passes through the press to prevent over-saturating the sandpaper with BIG. The plate was etched in the Ferric Chloride bath for a total of 35 minutes and we stepped etched using tape, contact paper, and sharpie as a resist.

Plate Preparation
The copper plate was polished with Putz Pomade, steel wool, and a scraper to remove large marks. The plate was degreased with soy sauce that was rubbed onto the copper plate using a piece of rolled felt, rinsed and then dried with a clean rag and blow dryer. The BIG ground was applied using a hand roller and hardened in the oven at 220 degrees for 9 minutes. On the plate we laid 400 grit sandpaper face down and ran it through the etching press for a total of 8 times. After each pass we slightly turned the sandpaper in a clockwise motion to ensure an even impression. After 4 passes the sandpaper was removed and replaced with a new piece. The plate appeared to have a pronounced texture.

Etching Notes
Plates was rinsed well under-water after prepping the aquatint at the press. Each plate was etched in a vertical etching tank of 38Â° Baume Ferric Chloride for a total of 35 minutes.

Removal of Grounds
The ground was easily removed with a clean rag, Soy Solve, and Simple Green. We used alcohol to remove the Sharpie lines. After we removed BIG the plates were rinsed in water and deoxidized in the plate brightener bath made of distilled white vinegar and salt (1 gallon/1 cup). It took a few applications to take the ground completely off.

After Bath Evaluation
The tape and contact paper removed easily. The Sharpie made both a stopped out line and an etched line, which could be due to the alcohol in the marker. Looking through the magnifier, the plate seemed to have a lot of open bit areas and variation. The dots were far apart and varied, not a desirable characteristic in an aquatint. 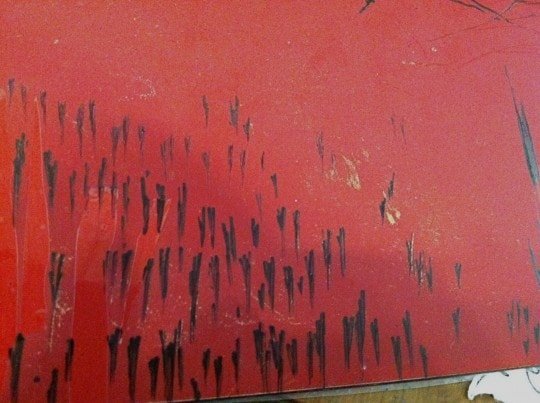 Inking Methods
The plate was inked with Graphic Chemical & Ink Co. Bone Black Etching Ink #514. The plate did not hold much ink in the more heavily etched areas of the plate. The ink was carded on with mat board scraps, wiped in gentle circular motions with used tarlatan, and then palm wiped. The surface felt very powder-like and easy to hand wipe.

Test Conclusion
The printed proof shows a light aquatint. There is a nice even tone in the light areas and a lot of inconsistency throughout the rest of the print. The medium to dark areas have a lot of speckled type textures. There were also some type of fiber like filament lines throughout the image. 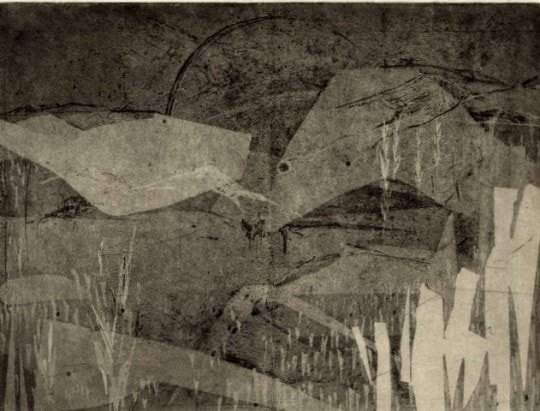