Test Summary
In this test we experimented with 320 grit sandpaper and 400 grit sandpaper on two separate plates to create an aquatint using BIG ground. The plate where etched in Ferric Chloride for 15 and 30 minute increments in hopes of creating a medium gray and black tone. 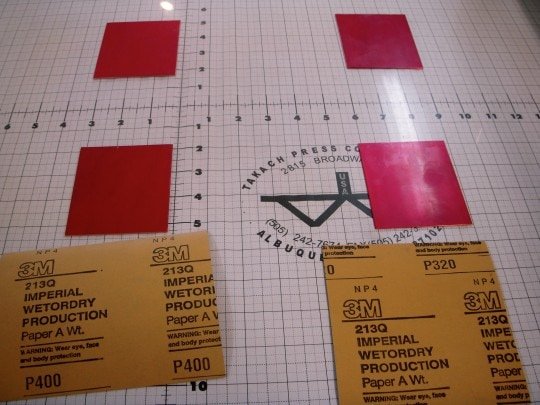 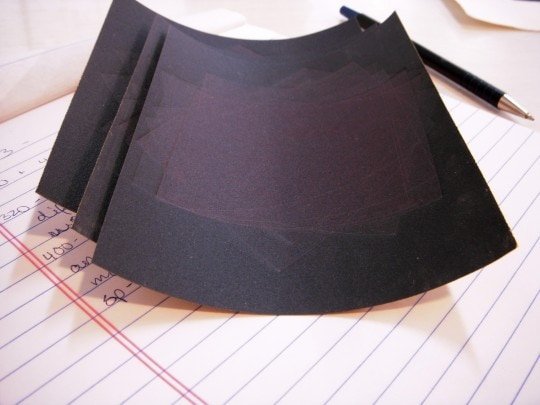 Etching Notes
Each plate was etched in a vertical etching tank of Ferric Chloride at 38° Baume. Plates were rinsed well after prepping at press. Half of the plate was stopped out with packing tape after 15 minutes. The ground is holding up well and only slightly darker since it has been in the bath. After 30 minute, red of ground has noticeably darkened.

Timed Application of Mordant
After 15 minutes the ground shows only slightly darker areas. After 30 minutes the red of the ground is noticeable darkener.

Removal of Grounds
The ground is easily removed with a clean rag and Soy Solve and Simple Green. After we removed BIG the plates were rinsed in water and deoxidized in the plate brightener bath made of distilled white vinegar and salt (1 gallon/1 cup). It took a few passes to take the ground completely off.

After Bath Evaluation
The etching on both plates looks consistent. It is difficult to distinguish between the 15 and 30 minute areas as well as which plate used 320 grit and which was 400 grit. Compared to the prior experiment the different etched areas have a definitive edges on the plate.

Inking Methods
Both plates where inked with a mixture of Charbonnel Aqua Color and Charbonnel Aqua Color oil (about a quarter amount oil to ink). A second proof was pulled with Daniel Smith creamy french oil based ink. The ink was carded on with mat board scraps, wiped in gentle circular motions with used tarlatan, and then palm wiped. The plates are noticeably holding a decent amount of ink.

Test Conclusion
The proofs are all consistent in tone and show a clear distinction between gray and black. The 30 minute square on all 4 proofs is slightly lighter than expected. There is an overall “cloudiness” throughout the aquatint, preventing the black from being a true black. In comparing the 320 and 400 grit plates the later has a more dense tone. The oil based ink made proofs one degree darker than the water-based. 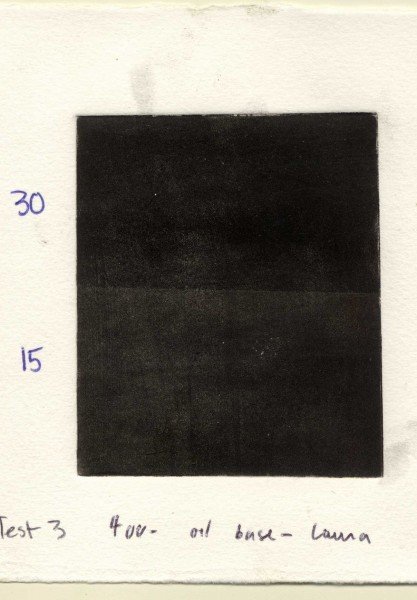 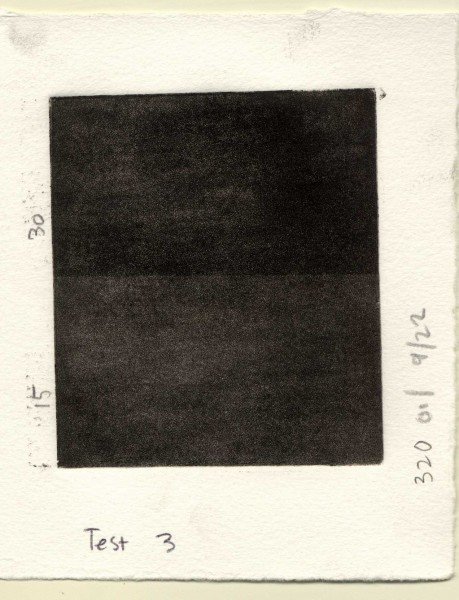