Test Summary
We repeated the same process as test 1 by creating an aquatint using 400 grit sandpaper. The sandpaper was impressed into the BIG grounded plate with an etching press. The plate where etched in Ferric Chloride for 15 and 30 minute increments in hopes of creating a medium gray and black tone.

Plate Preparation
The copper plate was polished with Putz Pomade, steel wool and a scraper to remove large marks. The plate was degreased with soy sauce that was rubbed onto the copper plate using a piece of rolled felt, rinsed and then dried with a clean rag and blow dryer. The BIG ground was applied using a hand roller and hardened in the oven at 220 degrees for 9 minutes. We allowed the plate to sit for a week before proceeding with the experiment. We laid 400 grit sandpaper face down onto the grounded plate and ran it through the etching press for a total of 8 times. Each time the plate passed through the press the blankets where lifted and the sandpaper was turned slightly in a clockwise motion. The plate had been sitting with the ground applied for a week so the surface was hard with no tacky feeling to the ground. After running sandpaper through 8 times, the ground doesn’t appear very course and there is little exposed copper. The plate was not rinsed before etching which could have left residual grit on the surface. 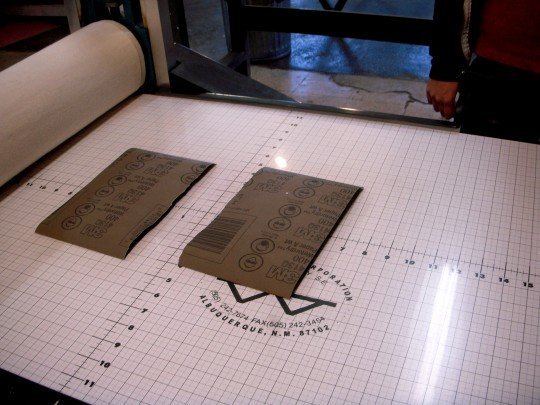 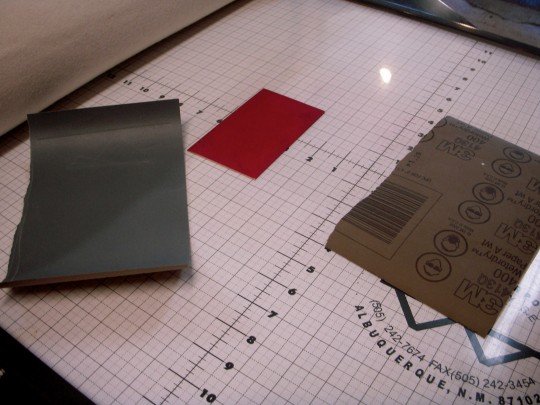 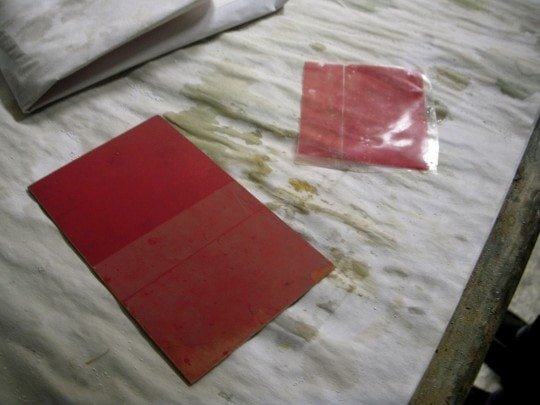 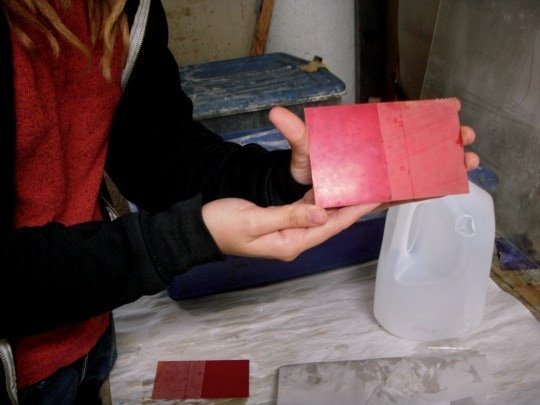 Timed Application of Mordant
After 15 minutes the red of ground is consistent across the plate’s surface with no noticeably darker areas. At 30 minutes the red is much darker and the ground is degrading near the edges of the copper plate.

Removal of Grounds
The ground is easily removed with a clean rag and Soy Solve and Simple Green. After we removed BIG the plates were rinsed in water and deoxidized in the plate brightener bath made of distilled white vinegar and salt (1 gallon/1 cup). We later discovered that some residual ground was left in the plate after repeated cleaning.

After Bath Evaluation
The etch of the 15 and 30 minute areas look similar under magnification. There appears to be spots of open bite where the surface has larger etched flat areas and less of the dot pattern we are seeking. 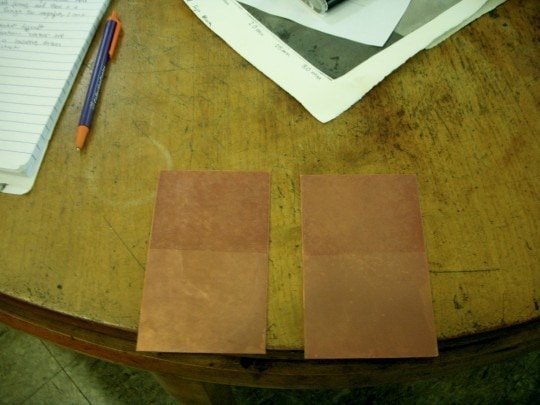 Inking Methods
The first proof was inked with a mixture of Charbonnel Aqua Color and Charbonnel Aqua Color oil (about a quarter amount oil to ink). The second proof was inked with Daniel Smith creamy french oil based ink. The ink was carded on with mat board scraps, wiped in gentle circular motions with used tarlatan, and then palm wiped. The plate does not seem to be holding much ink in the longer etched areas.

Test Conclusion
Neither of the proofs are as dark as we expected. This could largely be due to not rinsing the plate after creating the aquatint with the sandpaper. It could also indicate that the press pressure was not tight enough during the sandpaper process. There is lack of clarity in the aquatint but still the 15 minute area has a smooth modeled tone while the 30 minute area has variation. 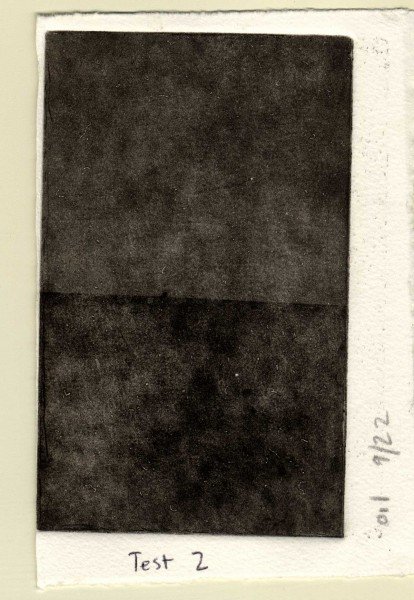 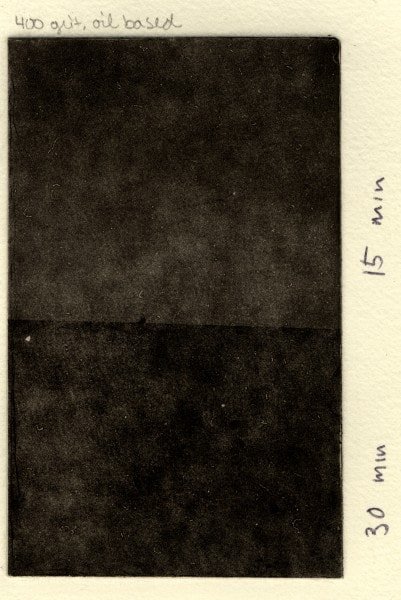