Test Summary
We are attempting to solve the problem of the BIG flaking off in the Ferric Chloride bath as the plate is etched. We heated the copper plate until slightly sticky, applying the sandpaper aquatint, and baked the ground until it was hard and smooth to the touch.

Plate Preparation
This test was done with two plates and two different grades of sandpaper. The copper plates were polished with Putz Pomade, steel wool, and a scraper to remove large marks. The plate was degreased with soy sauce that was rubbed onto the copper plate using a piece of rolled felt, rinsed and then dried with a clean rag and blow dryer. The BIG ground was applied using a hand roller and hardened in the oven at 220 degrees for 10 minutes. While the plates were still sticky we laid 400 grit sandpaper and 220 grit sandpaper on each one face down and ran it through the etching press. We ran the 400 grit sandpaper through 8 times, replacing the paper halfway through the process, and the 220 grit sandpaper through 5 times. After each pass we slightly turned the sandpaper in a clockwise motion to ensure an even impression. We rinsed the plate well under running water and the surface feels slightly course. We rinsed the plates under running water and baked them for another 10 minutes, allowed the plates to cool completely, and felt them with out fingertips to make sure the surface was smooth without any tack. The plates looked sparkly and appeared to have a good proportion of exposed copper. It looked like the amount of exposed copper had decreased after the second time we baked the plates.

Timed Application of Mordant
The copper plate was etched two times. After the first 15 minutes we took the plate out of the bath, rinsed it under running water, and placed it in the brightener bath to remove oxidation. After we dried the plate with a clean rag we stopped out half the plate areas with clear packing tape. We placed the plate back in the bath to etch for an additional 15 minutes.

Removal of Grounds
The ground was removed with a clean rag, Soy Solve, and Simple Green. After we removed BIG the plates were rinsed in water and deoxidized in the plate brightener bath made of distilled white vinegar and salt (1 gallon/1 cup). It took a few applications and a toothbrush to scrub the ground completely off. We found that leaving the Soy Solve on the plate for an extended period of time makes it easier to remove the ground.

After Bath Evaluation
The plates did not properly etch. It appears that there was too much ground on the plates for the sandpaper to penetrate and expose the copper.

Test Conclusion
The proofs were light because not enough copper was exposed to the Ferric Chloride while etching. The plates looked well aquatinted before the second baking. We think this is an indication that the second baking melted the ground back into the indentations the sandpaper had created. Half baking a plate is not a solution to the problem of ground wearing off. 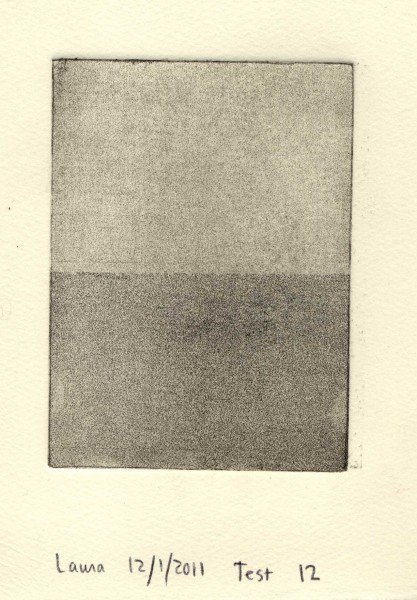