Experiment goal: To print McKenzie’s etching image and the new portrait image, but this time using Pledge Floor Finish as an alternative to Shellac.

Procedure: We are searching for a less irritating alternative to Shellac spray. Though Shellac is non-toxic, the fumes of spraying it are bothersome to many individuals. In this test, we created two plates in the usual manner, this time making sure to let the emulsion dry after coating and before exposing for around 6 hours.  After washing out the emulsion, we put Pledge Floor Finish inside of an airbrush and used that to coat our plates. McKenzie’s etching image was probably coated with a slightly thicker layer of the Pledge. We then let them dry for about twenty minutes before printing as usual, on a Praga press with a pusher and catcher, and using Gamblin Bone Black ink mixed with burnt plate oil. 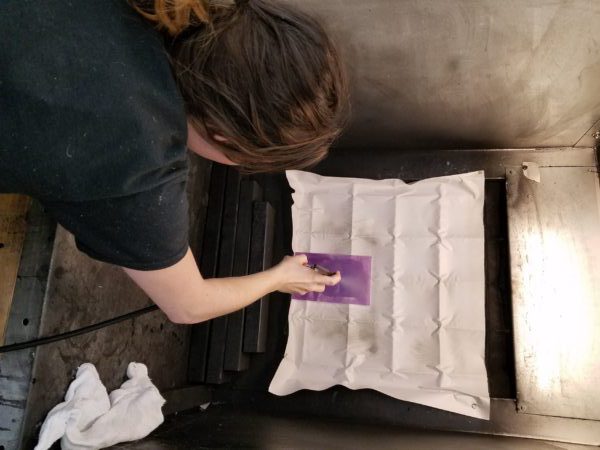 Mady is coating/spraying a plate using the Pledge Floor Finish in an air brush.

Conclusions: We noticed that there wasn’t much of a difference in texture/shine, or thickness of the Pledge Floor Finish after letting it sit for 20 minutes. while spraying the Floor Cleaner it did appear to look like it had too much on the plate but after allowing the plate to sit flat and dry this thick looking spray was no longer an issue. We actuall realized there is barely any difference between the two sprays besides the smell. weather you use Shellac or Pledge Floor Finish depends on the persons preference.

Note: Due to the smell that shellac gives off in a closed shared studio space, we will be using Pledge Floor Finish from here on out.

McKenzie’s Etching Bridge Image: This print looks similar to test 14. A little bit of the emulsion washed away where it was not supposed to and this led to some loss of detail, but it was not major as in some earlier tests.

Mady’s Portrait: This plate did not print very well, the image is very gray and it lost a lot of detail. We are unsure whether this was due to the exposure time, or the Photoshop job on the image. It may be due to the quality of the image, since it was taken off of the internet.

Overall, both Pledge Floor Finish and Shellac seem to work in about the same way. Neither seems to be significantly superior. In the next test (Test 16), we print a Shellac-ed plate and a Pledged plate 10 times each and notice that the Pledge plate gets scratched over time less easily.