visit us on Facebook visit us on Vimeo visit us on Instagram
buy prints
Non-Conventional Airbrush Aquatint II
Temperature: 70 degrees
Humidity: Low
Researchers: Sam Guerin
During this experiment the Badger single-action airbrush died, and we switched over to a Paasche double-action model. The dial on the tip of the airbrush is used to preset the fineness of the spray, and is activated by depressing the lever on the top of the airbrush straight down. The flow can also be controlled by pulling back on the lever, which provides analog control while spraying. We started out using a #3 nozzle, and later switched to a #1 nozzle, though had problems with both. More so than the
Badger, the Paasche seems to have more trouble with clogging. The protective cover on the tip of the brush, which begins to film over with solidified spray after about 6 minutes. The flow itself was irregular as well, and the airbrush would often seem to clog and cease to emit any spray at all, and would only resume flow after being ‘discharged’ by fully opening up the aperture. After a week of use, the Paasche began to develop the same problem that the badger was having, where the lever would stick and stay depressed, a problem exasperated by the double-action system. As such, we had a handful of problems with over-spraying, under-spraying, and uneven particle size on our test plates. However, These did not interfere with the more general question of our research in this experiment.
Can newsprint stencils be used to create images by localizing aquatint spray?
Prepared a .032 Copper plate; beveled, polished with Emery paper and Pepsodent toothpaste, degreased with Bon Ami and Soy Sauce. We cut a stencil from newsprint and adhered it to the back of the plate, while leaving it loose on the surface to try and replicate the soft edges that we achieved in the previous experiment. Sprayed the stenciled plate aiming for optimal coverage but ended up over spraying with uneven dot size. Removed the stencil and dried the plate in the hotbox for 20 minutes.
The spray left a defined design on the plate, with soft edges and some spray that has crept under the newsprint: only the basic shape of the stencil was retained, edges are only generally defined, and any detail smaller than an inch square didn’t translate. 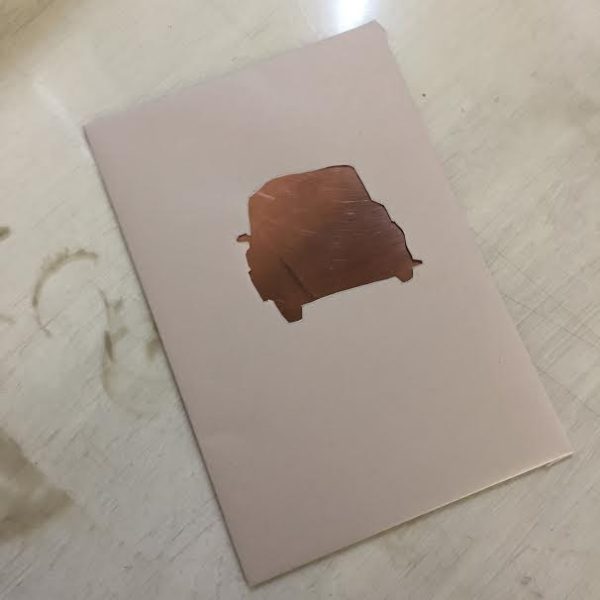 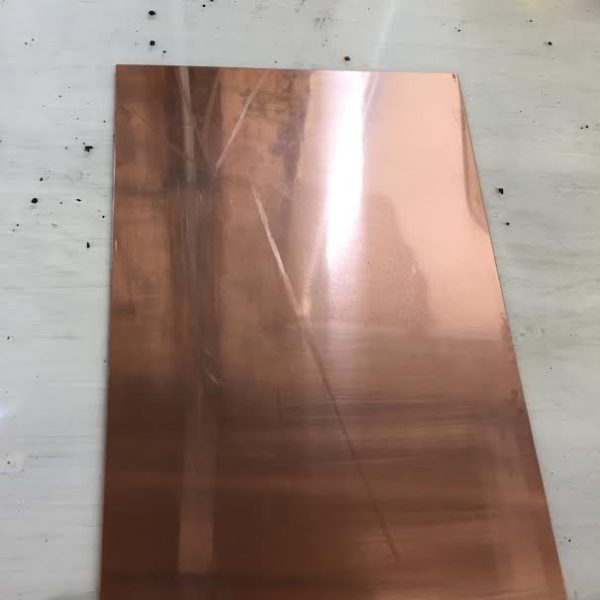 Etched in 36` baume Ferric Chloride for 7 minutes. Washed out with cold water, deoxidized, stripped, and cleaned with vegetable oil. The open bit areas are foul bitten, but not terribly, while the aquatinted area translated pretty directly from the pattern of the spray.
Printed in Graphic Chemical Bone Black 514C on Hannamule Copperplate Cream (in damp pack for 5 hours) on the Charles Brand etching press with the pressure at 0.12. Light tarlatan with handwipe.
As in the previous experiment, the areas of the plate that were partially bitten by the aquatint but not completely covered appear darkest on the plate while wiping;
manifesting in this case as a kind of halo around the edge of the aquatinted shape. This doesn’t show in the print though, so I suspect it’s just plate tone. The general design was less defined that I had anticipated at the beginning of the experiment, though still produces an interesting effect: a grainy, fuzzy area that holds ink evenly (even more so with a finer spray than we achieved) and fades softly into the open-bit white of the rest of the plate. 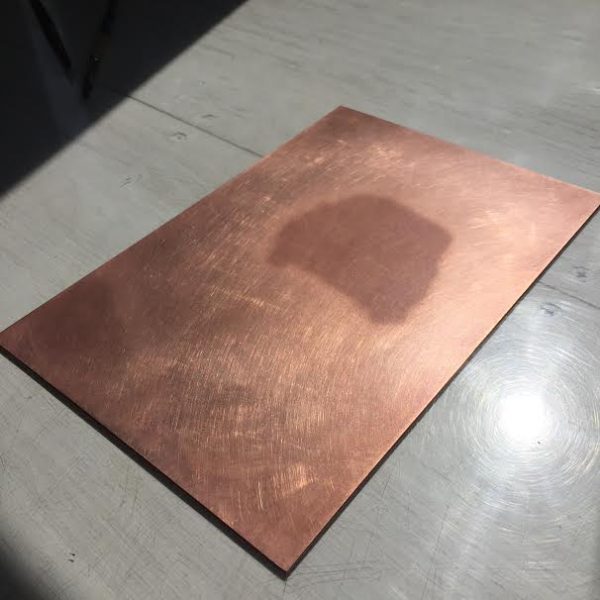 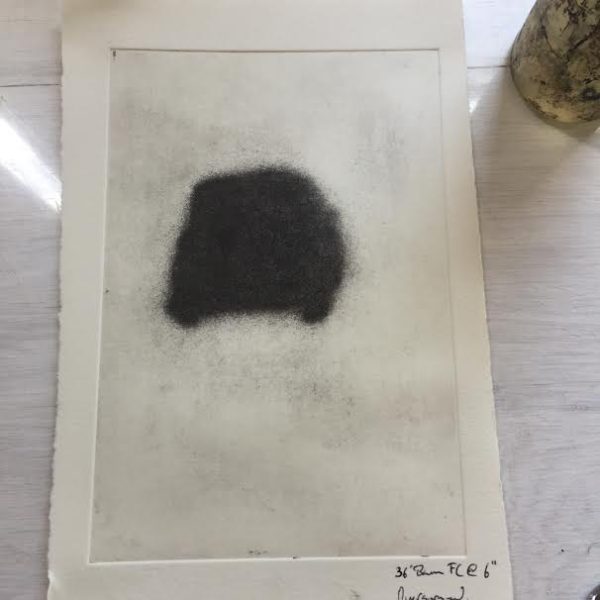