visit us on Facebook visit us on Vimeo visit us on Instagram
buy prints
Non-Conventional Airbrush Aquatint I
Date: April 2017
Temperature: 66 degrees
Humidity: Medium, Raining
Researchers: Sam Guerin and Claire Crews
Can varying coverage density while using a consistent airbrush aperture on the same plate be used to create a tonal range in a single etch?
Prepared a .032 Copper plate; beveled, polished with Emery paper and Pepsodent toothpaste, degreased with Bon Ami and Soy Sauce. Our goal was to use stencils to block out sections of the plate, varying the amount of spray on each section, while maintaining a consistent an even distribution over the entire surface, so that the only variable element was the amount of time that each section was sprayed.
To quantify this we created a grid on newsprint to establish a baseline for the dot coverage of time exposed to spray, aiming for divisions of 10, 30, 50, 70, and 90 percent coverage. With the nozzle on the badger open at one half turn for a fine spray, we sprayed the sections for 30 seconds, 1, 2, 3 and 5 minutes respectively. We found that for the later times the airbrush began to clog, seeming to restrict finer particles while inconsistently releasing larger ones: this may be due to intervals between spraying, where the airbrush was not cycling while we reset the newsprint, or due to the time spent spraying. 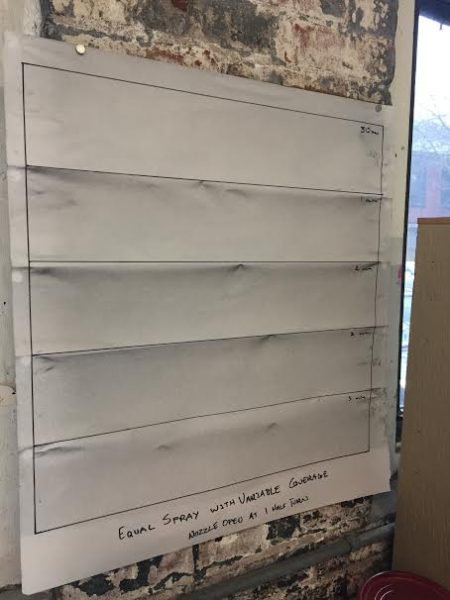 With a metric set, we cut a series of three stencils out of newsprint and adhered them one on top of the other to the plate, taping them to the back, so that each stencil may be removed, leaving a smaller one underneath. We set the airbrush to the same aperture, and sprayed the plate using additive times as we removed the stencils (so that each section received progressively less exposure to the spray,) such that the area that was exposed to the spray the longest (the first stencil removed) had been sprayed for 5 minutes, while the area that was exposed to the spray for the shortest period of time was only exposed for 30 seconds (the last stencil to be removed), with 4.5 minute and 2.5 minute intervals in between. This resulted in a clear variation of tones from the spray itself on the plate. 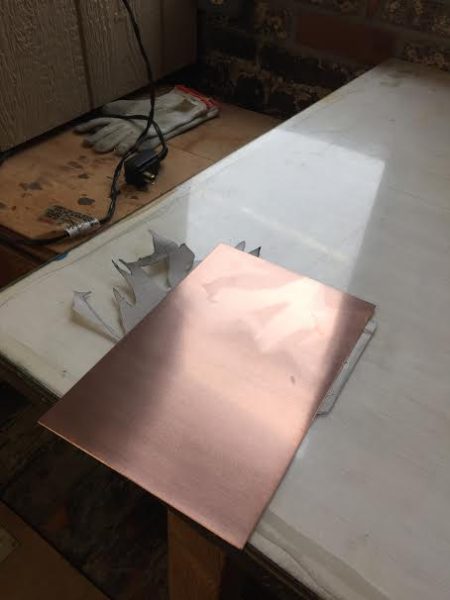 Hardened the plate in the hot box for 20 minutes, backed with contact paper, and etched in 39 baume Ferric Chloride for 15 minutes with no stopping out. Rinsed with cold water, De-oxidized, and washed in Stripper bath. The time in the stripper bath seemed to leave some aquatint spray on the plate, but it came out after cleaning with vegetable oil. Some odd coloration from oxidization, but all areas of the plate appeared to have etched unimpeded, and the pitting density shows some distinction between the
different exposures. 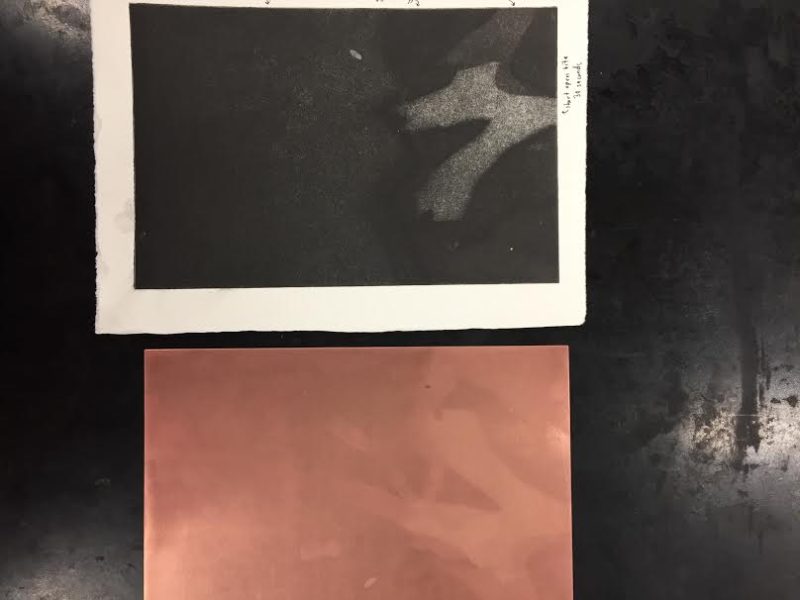 Printed in Charbonnell 55981 on Hannamule Copperplate Cream (soaked for 20 minutes and blotted dry, no damp pack) on the Praga etching press with a catcher and pusher with the pressure at 5`. Wiped with light tarlatan and majority handwipe. While wiping, all areas of the plate appear to be holding tone, though with less visible variation than expected. The area that was exposed the least to the spray appears darkest on the plate (see image), though this is likely just visible plate tone, that appears darker as the ink is more defined on the surface of the plate, rather than contained in the pitting.
The areas with the least exposure to the spray built up some pitting marks from the aquatint, but were mostly open bite, printing to a pitted, uneven light grey. Meanwhile the areas that had been exposed the most at 5 minutes printed to a similarly uneven grey, though on the darker end of the spectrum.
Rather than plate tone and a scattering of marks, over exposure becomes splotchy from too much aquatint resist, yet not enough to lighten the plate further than an uneven dark grey. There is little distinction between the two medium coverage times (2.5 and 4.5 minutes), with each printing to a relatively smooth black.
In effect, varying coverage provides little tonal differentiation using a single etch, and doesn’t seem to have much of a range beyond a middle grey on either end of the spectrum, with those greys being significantly less unified and fine that conventional aquatint coverage and spray. However, the kind of edge quality that the newsprint stencils produced is really lovely where it does show, giving a kind of softness to tonal edges that isn’t possible with step biting or even spit bite. It might be productive to
reduce the elements that we tested in this experiment to their component parts (stencils, coverage, open bite with localized aquatint) to get a clearer picture of how each variable acts independently. In addition, exaggerating the variation of coverage past where we thought we were might produce the tonal shift that we desire.
next
previous