Test Summary
I applied the Edinburgh Lift Ground to a copper plate that has been etched two previously times. I switched back to the Windsor Newton artist masking fluid because it functions better than the Da Vinci masking fluid.

Plate Preparation
I began by de-oxidized the plate in the vinegar bath and cleaned the plate surface twice with Bon Ami. Degreased with soy sauce that was rubbed onto the copper plate using a piece of rolled felt, rinsed and then dried with a clean rag and blow dryer. I mixed a small amount of Edinburgh Lift Ground consisting of one and half teaspoons Windsor Newton artist masking fluid, quarter teaspoon water, and two eraser tips of gouache. I painted the ground onto several places on the plate; one area of unetched copper and one area where the copper is most heavily bitten and allowed the Lift Ground to air dry for 30 minutes. The Z-Acryl hard-ground emulsion was poured across the copper plate and caught in a water tray. I stood the plate up vertically and allowed it to dry in the open air for 5 minutes. The copper plate was placed in the hotbox for 30 minutes to harden the Z-Acryl. I placed the copper plate in a bath of hot water after hardening the ground and soaked it for 5 minutes before I attempted to remove the lift. The Lift Ground came off easily with gloved hands except for a few trouble spots where I had to really scrub this could be a result of the hotbox hardening the Lift Ground. I applied aquatint with a Paasche airbrush at its finest setting in 5 passes and placed the copper plate in the hotbox for 20 minutes.

Etching Notes
The plate was etched in a vertical etching tank of Ferric Chloride at 36° Baume.

After Bath Evaluation
I could not get all the Lift Ground off because it became fused to the plate’s surface because of heating. These areas came off after the first printed proof.

Inking Methods
The plates were inked with unmodified Graphic Chemical & Ink Co. Bone Black Etching Ink #514. The ink was carded onto the copper plate with mat board scraps and wiped with used tarlatan.

Test Conclusion
Even in the most bitten areas of the plate the Lift Ground translated the applied brushstrokes. You can apply Edinburgh Lift Grounds even on heavily etched plates. 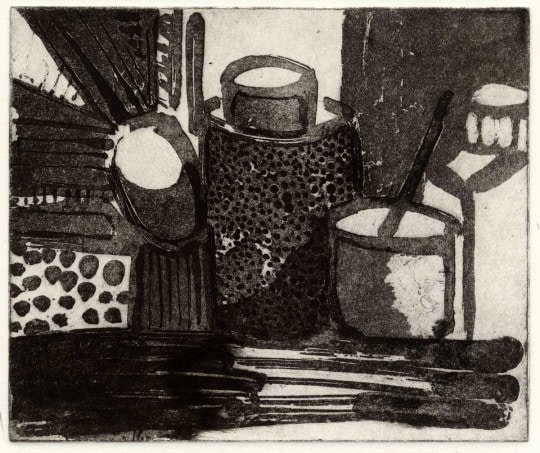