Test Summary
In this first experiment we tested a lift application suggested by Edinburgh Print Shop in Edinbrugh, Scotland. It consists of 3 teaspoons Windsor Newton Watercolor Artist Masking Fluid, 5 eraser tips of gouache, and half a teaspoon of warm water.

Plate Preparation
Degreased with soy sauce that was rubbed onto the copper plate using a piece of rolled felt, rinsed and then dried with a clean rag and blow dryer. The degreasing was done three times and then I allowed the plate to sit overnight. Our first experiment was with a mixture of 3 teaspoons of Windsor Newton Warercolor Artist Masking Fluid, 5 eraser tips of gouache, and half a teaspoon of warm water. I painted the lift ground unto the copper plate using a variety of different brushes and placed it on a hot-plate set at 150° for 5 minutes. The Z-Acryl hard-ground emulsion was poured across the copper plate and caught in a water tray. I stood the plate up vertically and allowed it to dry in the open air for 5 minutes. The copper plate was placed in the hotbox for 30 minutes to harden the Z-Acryl. After the hardening the copper plate was placed in a bath of warm water. I rubbed at the ground with for 10 minutes with bare hands. Oxidation began to appear on the copper plate surface so I periodically placed the plate in the Brightener Bath made of distilled white vinegar and salt (1 gallon/1 cup). I dried the plate by blotting and blow drying. Aquatint was applied in five passes to the plate with a Paashce airbrush set at it’s finest setting. The aquatint was air dried for 5 minutes 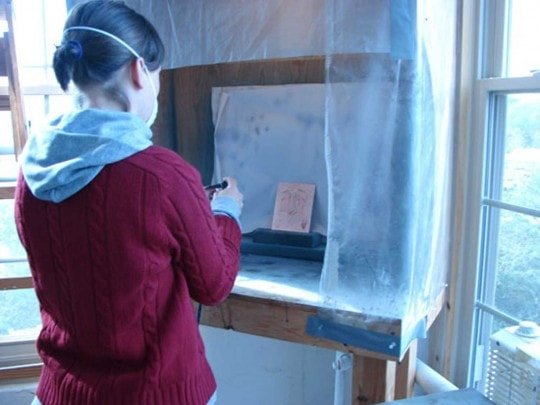 Applying an aqautint to the plate

After Bath Evaluation
The plate immediately began to oxidize when exposed to the air. I placed the copper plate in the brightener and toweled dried. False biting has appeared in the middle of the plate we suspect this was caused by placing the grounded plate in the water bath to remove the lift mixture. The water thinned the ground and caused the unwanted tone. 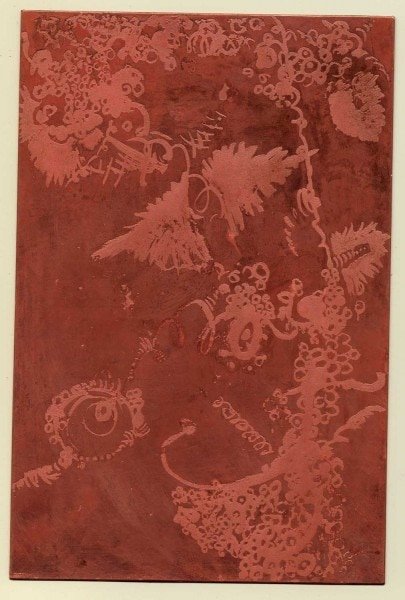 Inking Methods
The plates were inked with unmodified Graphic Chemical & Ink Co. Bone Black Etching Ink #514. The ink was carded on with mat board scraps, wiped with used tarlatan, and then palm wiped.

Test Conclusion
The initial lift mixture that we created was difficult to remove. If the ground is painted too thin it may not come off at all. Too thin a layer gives you nothing to rub to take the lift mixture off. We attempted to paint different variations of lift to create tonal variations however this did not work. It is best to use gloves when removing the lift from the plate. 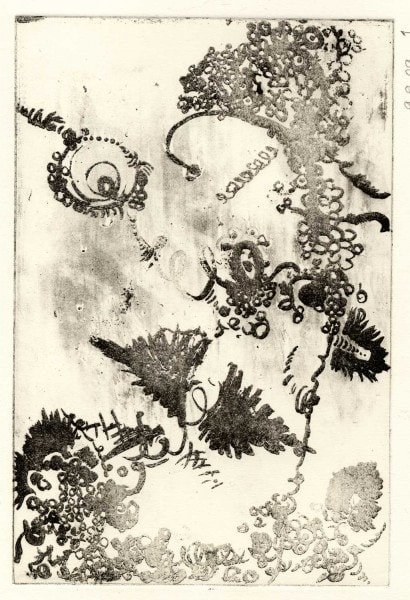