Test Summary
In this trial, more attention was paid to the tonal ranges of the image in Photoshop. To achieve a successful range of tones in etching the image not only does the image have to be an inverted “negative” on the film, but the values themselves must be changed so that the darkest blacks desired in the final print are in fact a mid-gray when viewed in Photoshop. This is so the printer prints a dot pattern that is not completely closed so that the ferric chloride has somewhere to bite during the etch. In contrast to this, lighter and areas will have to print in a more “closed” dot pattern so they stop out the mordant on the plate. The midtones must remain in a balance of these two concepts.. The numbers we decided to apply to the image in Photoshop’s “Curves” menu were directly borrowed from Dwight Pogue’s book “Printmaking Revolution: New Advancements in Technology, Safety, and Sustainability,” where in a chapter dedicated to photoetching with Velvetint, contributing writer Mark Zunno describes his method of creating a film negative in Photoshop. The difference here is that Zunno’s method involves using an exposure unit to apply the image to his plate. Photoshop changes where the only variants in this trial, Plate 21.

Plate Preparation
Plate was polished with 00 gauge steel wool, beveled, and degreased with a soy sauce to water 1:1 ratio.

The image was opened in Photoshop and the following changes were applied under the “Curves” menu: Black output 50, White output 205, Gray output 111. A grain texture was applied at intensity 21, contrast 64.The image was then inverted under Image >Adjustments>Invert. 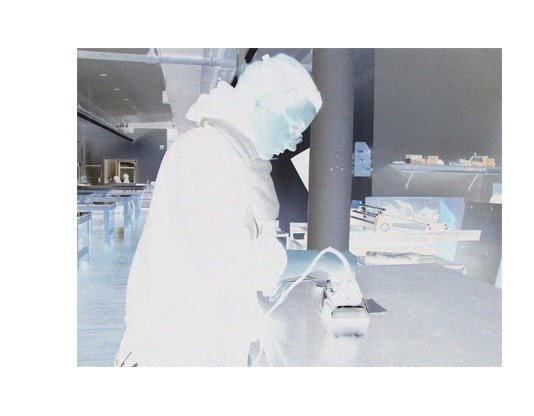 The image, curves applied and inverted, ready to print. 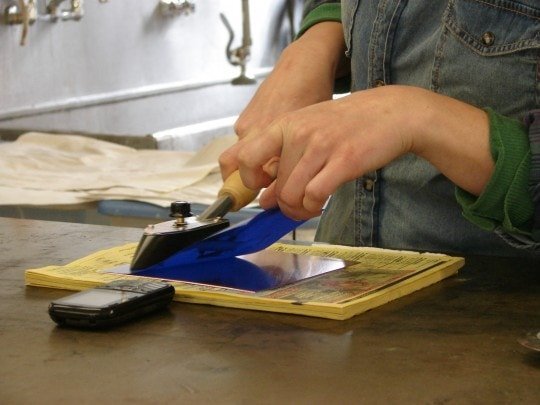 Ironing the film to the plate with a tacking iron.

Etching Notes
The plate was etched in a 40 degrees Baume Ferric Chloride bath for 30 minutes. 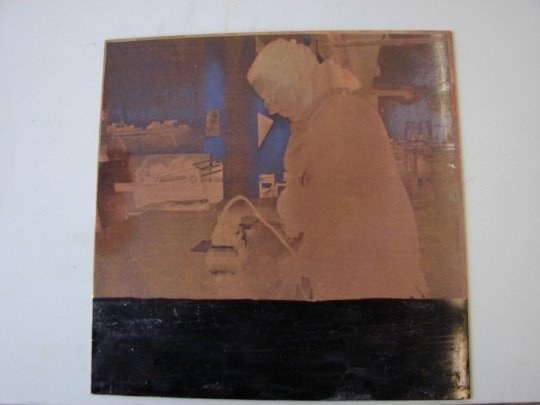 After Bath Evaluation
It is evident at this point that background detail has been lost, most notably in the upper left of the image. It is unclear whether this is due to over-etching or some other possibility.

Test Conclusion
Much detail was lost; it appears that pushing the curves to the numbers we decided on still to be worked with. The lights and midtones were perhaps not pushed “closed” enough; the figure and the foreground have merged to become a single silhouette. The conclusion we have come to is that the challenge is the alteration of the image in Photoshop. It is unclear whether there will be a “sweet spot” of values that will apply to images printed on the film, or if each subsequent image will need its own formula of numbers. In either case, subsequent trials will take care to assess how the image is being read in the Photoshop program and across devices to the Brother laser printer. 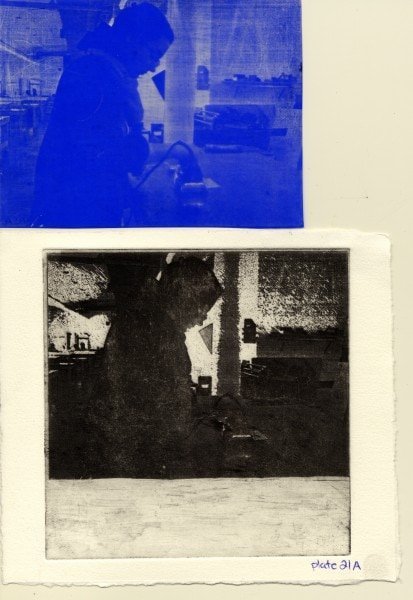