Test Summary
As a response to the knowledge that the Invert command in Photoshop is not recognized as a negative, we have made adjustments to the image in Photoshop and have not altered the physical components of the experiment. As an addition to this test, we printed two plates. Both contained the same Photoshop alterations save that one image contained a “grain” texture filter, while the other did not.

Plate Preparation
The plate was backed with contact paper and the edges beveled. It was degreased with soy sauce. The image was resized to 5.9 x 4.4 to fit on our copper plate. The tonal curves were adjusted in Photoshop with the black at an output of 55. The image was then inverted.

Because the grain texture filter on our previous images was successful, we decided to print two images–both with all the same Photoshop alterations except one. The independent variable was that one of the two images had an added “Grain” pattern, while the other did not. It was our hypothesis that the “Grain” would add extra tooth to the etch to hold more ink and thus more detail, with the control being the image without the “Grain” filter. The grain filter constraints that were applied in Photoshop were: intensity:21, contrast:64.

We ironed the film with the image side down on both plates with a tacking iron for improved dexterity. We ironed it for 8 minutes at 300 degrees F. 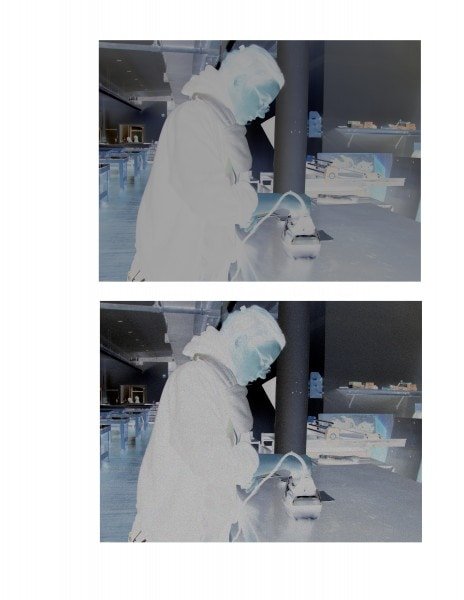 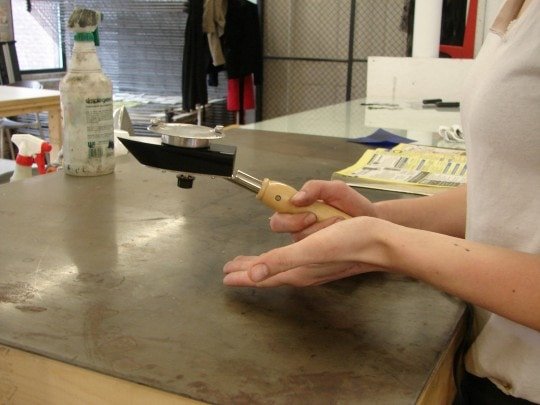 Heating the iron to 300 degrees F 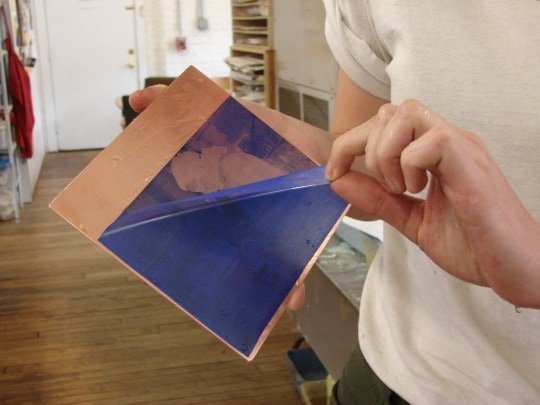 Peeling the ironed, rinsed film from the plate

After Bath Evaluation
The use of the Curves resulted in a successful etch of a fine tooth dot pattern, and the image retained its integrity.

Test Conclusion
In both prints there is more complex tonal quality and detail. We achieved darks without open biting. Some issues with the print include diagonal lines where whites exist in the image, for example, they can be seen on the figure’s arm holding the iron, and on the table upon which the iron is resting. The plate with the grain filter contains more delicate midtones and transitions between them, while the original untextured image has greater contrast. It is our opinion that some sort of filter, screen, or texture is required for successful photo transfers with this medium. Another factor lies in the fact that the proof we pulled with the film still on has a more delicate tone transition, whereas the print from the plate with the ground removed has more intense contrast. Very few mid tone grays exist. Perhaps a shorter etching time is in order. It may be that using this medium requires leaving the ground on the plate when printing.