Test Summary
With this test we were interested in how the Photoshop filter ‘Grain’ affected the aquatint capabilities when etching and printing.

Plate Preparation
We prepared the plate by using steel wool gauge 00 to polish the plate, and then used soy sauce to degrease. We added an adjustment layer in Photoshop with the ‘Grain’ filter. We used the ‘dot’ option in the “Grain” window and inverted the image. After printing the image, we incrementally heated the film onto the copper with a small iron. The iron temperature was 290 degrees Fahrenheit and we heated it directly for 8 minutes. Small bubbles appeared in the white areas but did not affect the transfer. 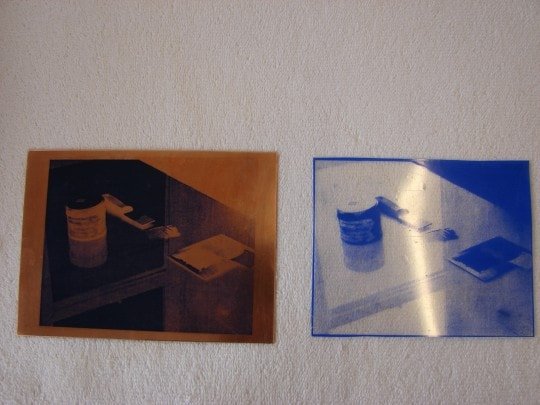 Removal of Grounds
We removed the film with steel wool gauge 00.

After Bath Evaluation
The image fully transferred with few bubbles and didn’t sustain damage due to over ironing. The diagonal pattern that occurred in the previous test (using the ‘halftone’ filter) did not occur, possibly indicating that those lines were due to the halftone filter exclusively. It appears as if some open biting will occur in the darkest areas when printing. 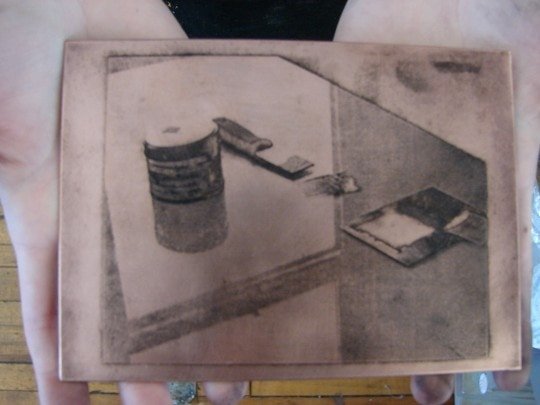 Test Conclusion
The texture of the printed image using ‘grain’ as the filter resulted in a less coarse overall aesthetic than the previous filters used. The tonal range is now of some concern considering our deep blacks continue to open bite and the values are difficult to get exact.