Plate Preparation
Using the same image we used in test 3, we opened the image in Photoshop CS2 and resized it to 5.25″x 4″ to fit within our plate size. We multiplied it to four images. We converted the image to Grayscale, then inverted the colors to obtain the negative of the image.

We approached this test differently than previous ones. In this test we decided to layer a different screen into each of the four images to see if any of them would give us “tooth” we wanted (as stated in the summary of test 3). For these four, one image had a halftone screen, another had a grain pattern, another had a reticulation pattern, and the final was simply the original negative of the image.

We then printed the completed images on one sheet of PCB Press-N-Peel Blue film with a Brother HL-2280DW laser printer.

For this test, we used the image with the halftone screen embedded in it. The parameters in Photoshop CS2 are size: 1, Contrast:4, Pattern:dot.

The plate was degreased with a 1:1 ratio of soy sauce to water. The film was laid on the plate image side down. We ironed sections in increments at 300 degrees F for about one minute. This time, a bone folder was NOT used. Instead, a smaller iron was used (about 1/2 size of the previous iron, and about the same size as our plate). We ironed the entirety of the film to the plate for about 7 more minutes, making sure the iron spent plenty of time on all edges of the film to ensure full transfer.

The plate was then cooled long enough to handle, then flooded with cool water for about 1 minute. There was a very small amount of bubbling, and minimal damage to the image from the iron. The film was then peeled off the plate, leaving blue where the lighter tones would be, and open copper areas where the ferric chloride would bite out the darker tones. 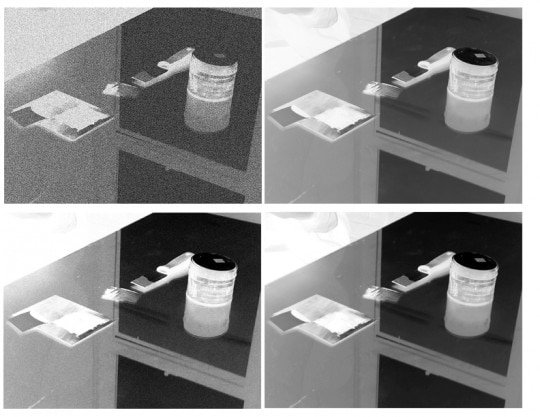 The completed Photoshop negatives. Each image has a different screen or pattern embedded. Clockwise, from top left: Reticulation, Original Image (no screen), Halftone, and Grain. Halftone was used for this test 4.

Etching Notes
The plate was placed in a ferric chloride bath of 40 degrees Baume. After it was removed from the vertical tank, it was allowed to drip then placed in a water bath for several minutes before handling.

Removal of Grounds
The grounds (the PCB film) were removed with #00 Steel Wool, water, and a small amount of Bon Ami all-purpose cleaner, then rinsed clean with cool water.

After Bath Evaluation
Close inspection of the image area indicates that small indents and disruptions in the image occurred where the iron nicked the film, However, damage relative to our last plate is minimal. Open bite still occurred but less quantities than previous tests.

Inking Methods
The ink used was Graphic Chemical Bone Black Etching Ink No 514C. It was applied with a small piece of mat board to press the ink into the etched areas. It was then wiped with a balled-up piece of tarletan to remove the ink from the surface area while leaving the inked tooth intact.

Test Conclusion
The tonal range of the image is wider than our last one, but open biting is still an issue. The halftone pattern layer yielded unexpected diagonal patterning in darker areas of the print. The nixing of the bone folder in favor of a smaller iron proved better for the image’s integrity and less damage. 3 more tests will be conducted relative to our experiments with screens in Photoshop.