Test Summary
Our goal is to use Press n Peel film as a one-step way to get a multi-tonal, photographic intaglio print. In traditional tonal etching the plate is coated with an aquatint ground and etched in stages, creating various depths in the plate. This film presents an opportunity to nix out the step-by step biting process needed to produce an image with tonal complexity, and suggests the ability to do it all in one bite. The key, we believe, is to embed a “screen” in the original image so that the Brother toner printer prints the image in tiny bits. In this way, the image acts as both an aquatint ground and as a dictator of tone. The following test documents our first foray into using a photographic image to test this hypothesis.

Plate Preparation
Since we had achieved success with image transferring, the next step was to test the film with an actual photographic image. We chose an image taken from test 1, a photograph of a putty knife placed next to a tub of Graphic Chemical Ink.

The plate was degreased with a 1:1 ratio of soy sauce to water. The film was laid on the plate image side down. We ironed sections in increments at 300 degrees F for about one minute. A bone folder was used to force bubbles out from between the film and the plate as we went. We ironed the entirety of the film to the plate for about 7 more minutes, making sure the iron spent plenty of time on all edges of the film to ensure full transfer.

The plate was then cooled long enough to handle, then flooded with cool water for about 1 minute. The film was then peeled off the plate. 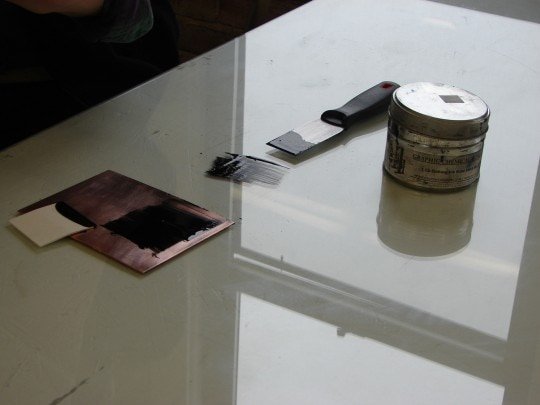 Image to be printed on film

Etching Notes
The plate was placed in a ferric chloride bath of 40 degrees Baume. After it was removed from the tank, it was allowed to drip for a few seconds then placed in a water bath for several minutes before handling.

Removal of Grounds
The Press n Peel film was removed with #00 Steel Wool, Water, and a small amount of Bon Ami all-purpose cleaner, then rinsed clean with cool water.

After Bath Evaluation
Close inspection of the image area indicates that small indents and disruptions in the image occurred where the bone folder was used too vigorously in pressing out bubbles.

Inking Methods
The ink used was Graphic Chemical Bone Black Etching Ink No 514C. It was applied with a small piece of card stock to press the ink into the etched areas. It was then wiped with a piece of tarletan to remove the ink from the surface area while leaving the inked tooth intact.

Test Conclusion
As stated above, there are small scratches present in the image where the bone folder was used too aggressively to press out bubbles between the film and the plate. Otherwise, the printed image is mostly true to the negative. One large area where it is not true, however, is in places where the tones are mostly or completely black. These areas will etch as an open bite since there are little (if any) dots of toner being transferred to these area by the film. As it currently stands, however, the film can indeed produce an image with a wide tonal range. Subsequent tests will involve trying increased resolution images, as our print seen here appears rather pixelated and our goal is to achieve a more fluid image. Additionally, we will be taking steps to see if we can in fact achieve a flat black with this method, or if in the end an actual aquatint will need to be applied to the plate alongside the Press-N-Peel film.