Test Summary
The purpose of this test was to see if using a different camera, one with a higher mega pixel, would result in a cleaner image and transfer.

First, using a Sony cybershot DSC-H2 camera we took a photo of an interior that had a variety of whites, grays, and blacks (interior of printshop with windows) 180 dpi is higher resolution than previous tests. 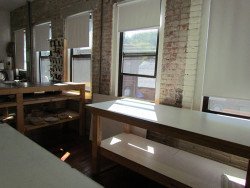 The image was then brought into Photoshop and saved as a RAW file. Followed the “Photo Intaglio with PCB Press n Peel Film’’ Photoshop adjustment sheet, from test #17. 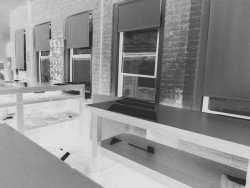 We waited 5 days before transferring it to the copper plate.

Test Summary- This test set out to answer two questions:
1. will a higher dpi in the original image make a distinct difference in the final print.
2. will the transfer be impacted by the amount of time between printing the film and adhering it to the plate. In this experiment we made one Press n Peel image that was immediately transferred to the plate and one Press n Peel image that sat for 5 days before transferring.

The image was printed on the PCB film with a Brother HL2280DW laser printer. 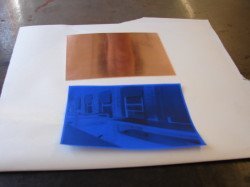 “Old” film that had sat for 5 days with the toner on the plate. 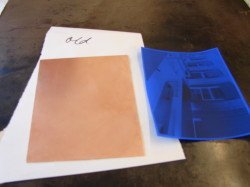 After the plate is cooled and contact paper is added to the back of the plate, the film is peeled off the plate. 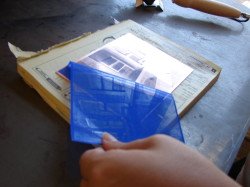 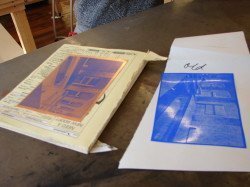 Etching Notes The plate was etched in a 39 degrees Baume Ferric Chloride bath in a vertical tank.
Time in Bath  20 minutes

Removal of Grounds : Plates were saturated with SoySolvII degreaser and left to soak for 5 minutes. Ground was then wiped off easily with a rag.
After Bath Evaluation:  The plate etched effectively with no visible damage to the image quality. 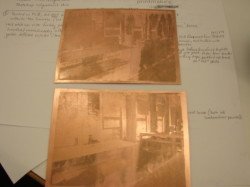 Inking Methods:  Plate was inked with Graphic Chemical Etching Ink in Bone Black, applied with a piece of mat board. It was gently hand-wiped in an outwards motion with a piece of tarletan. Then paper wiped.
Paper Type: Hahnemuhle, white Paper Soaking Time: 10 Minutes Press Blanket Setup: Takach pressure at 5.5,  2 blankets, sheet of newsprint

A proof of the “New” plate 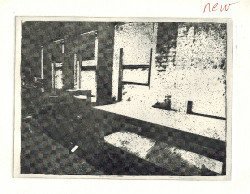 A proof of the “Old” plate

Both plates were printed a second time with ½ transparent base and ½ ink.

Test Conclusion-
Question 1: Starting with a higher dpi in the original image did not appear to make a difference. Using a RAW file didn’t appear to make a difference.
Question 2: The film that sat for 5 days seemed to have more information and create a clearer image than the film that was transferred immediately. In terms of inking and printing. There are more more grays with the 50% transparent base ink mix (than straight ink)