Test Summary
This trial comprised of two parts. One test was a revisit of our most successful test, test 17. We copied our process exactly to see if the results would be the same. The second test mirrored this but was altered to have a different etching time, bringing 30 minutes down to 20 minutes. This was to see if etching for a shorter time: 1. Actually differed at such long etching periods 2. Resulted in smoother images without hatch marks, as it is suspect that etching for so long may damage or eat away parts of the stop-out 3. Allowed for fragile details to remain without being over-bitten by the etch (if that was indeed the case)

Plate Preparation
This test regarded two plates with the same preparations and image adjustments for each.

The plates were beveled, polished with 00 grade steel wool, and degreased with 1:1 soy sauce: water ratio.

Two copies of the image were printed onto the film; one each for the two plates. 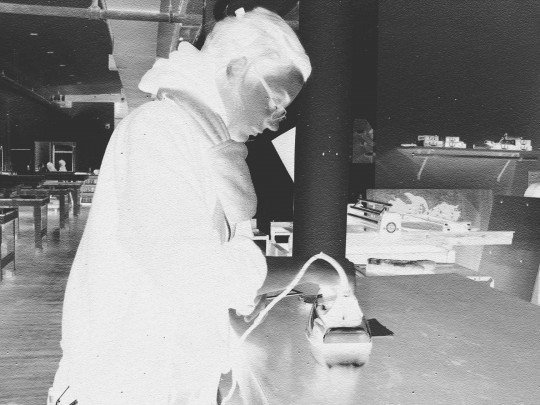 After Bath Evaluation
Both plates etched with hatch marks. These plates lack the smoothness of the previous plate this process was meant to mimic.Inking Methods
Plates inked with Graphic Chemical Etching Ink in Bone Black

Test Conclusion
Testers were surprised to find that the image quality was much poorer than the previous attempt this process was mimicking. Also, etching time does not account for the hatch marks, as they existed in the same spots and in the same amount on both plates. Testers believe that perhaps the order in which adjustment layers are placed during Photoshop editing plays a key role in the end result of the image quality. It stands to reason that say, adjusting “Curves” before inverting the image may have a different effect on pixel quality than vice versa. 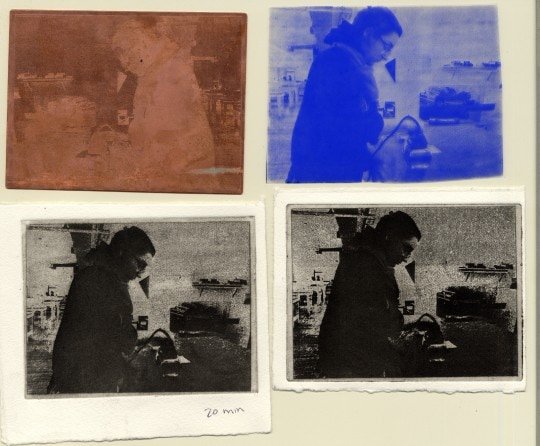