Test Summary
These trials were a continuation of our previous tests. However, here we experimented with the transfer process outside of the bounds of the instructions dictated by Techniks, Inc. Our previous tests did not consider the fact that we are operating with different factors than if we were using the film for its original, intended purpose. For example, we are using a different gauge plate–0.032″–than those suggested by Techniks, Inc–0.00137″ per square foot of circuit board–much thicker than the usual intended use. This invariably changed heating requirements for a successful image transfer, which is in fact for longer periods of time than the directions dictate. Other factors were changed throughout the following tests, but in the end it was the method and length of time of heating on which our image transfer depended. Trials 5 through 14 were unsuccessful relative to our intended goal. However, these provide useful information pertinent to learning about the PCB film and how it is affected or unaffected by various factors. Trial 15 was our successful experiment and ended our plate preparation manipulation trials.

The tests listed here cover the progress of 11 plates.

All plates were backed with contact film, beveled, and degreased with a 1:1 water to soy sauce ratio. The exception to this is plates no. 11-15, were degreased with 1:1 dish soap and water, but it should be noted that the testers believe this did not affect image transfer success. They were then quickly dried with newsprint to prevent surface oxidation. All plates had a cover sheet of newprint between the film and the iron.

Plate 5-Here we upped the time from 3 minutes of ironing to 4 minutes. Iron was moved in a continuous, up-and-down, back-and-forth motion across the plate.

Evaluation- Contact film backing on the plate began to melt to the table. Still an incomplete transfer, image was spotty where film did not stick to plate. Image was more sucessfully transferred in the center of the image than on the edges. We noticed that our earlier concerns with plates 1-4 about oxidation affecting the transfer had no bearing on the quality of the transfer itself.

Plate 6- Plate 3 from test 1 (see Press n Peel Test 1) was our most successful transfer so far, so we decided to mimic the same iron temperature and ironing length to see if we could get the same result: 300 degrees F for 3 minutes. We used a slower, iron movement across and up and down the plate.

Plate 7- This approach involved ironing the plate for 2 minutes at 300 degrees F, running it through a Takach press, pressure 6.5; then ironing for an additional minute afterwards.

Users of the Press-N-Peel PCB film report on the Techniks, Inc company website that they have been having transfer issues when using later model Brother brand laser printers. The laser printer at Zea Mays is, in fact, a Brother HL-2280DW, a later model relative to their line of printers. Using this nugget of information, we switched toner printers to see if that affected our success rate. For the tests that follow, all images were printed on the PCB film using a Canon Image Runner 2800.

Plate 8- In this test, switching toner printer was the only changed factor. The film was ironed at 300 degrees F for 3 minutes.

Evaluation: The Canon produced a grayer toned image onto the film than our previous runs with the Brother printer, because the printed image was actually a photocopy of our Photoshopped image on printer paper. However, this did not affect transfer success, which was still lacking. The transfer still mimicked the spottiness of previous trials.

Plate 9- Here the thought was that perhaps our iron had an uneven surface, thus affecting an even transfer of heat . We polished the iron vigorously for about ten minutes with #00 Steel Wool in small, circular motions. The film was ironed at 300 degrees F for 3 minutes.

Plate 10- Here we considered that we needed to take an extra step for an even distribution of heat. We decided the place the plate sans film in a toaster oven at 275 degrees F for 3 minutes. We then removed the plate and immediately ironed the film on it for 3 minutes at 300 degrees F.

Evalutation: The preheating of the plate caused more harm than good; the film was agitated by the heat upon placement and bubbled more vigorously than previous trials.

The followingÂ  plates were degreased with a 1:1 dish soap to cool water ratio, in place of the 1:1 soy sauce to water ratio we were using in trials 5-10. More importantly, we increased the ironing time in all of these tests, which gave us much more successful image transfers. This is in exception of plate 11, where the trial involved testing the dish soap as an exclusive factor to transfer success.

Plate 11- The only factor changed here was the replacement of the 1:1 soy sauce to water with 1:1 dish soap to degrease. The film was once again ironed at 300 degrees F for 3 minutes.

Plate 12- For this plate, we placed a phonebook underneath the plate while ironing in an attempt to keep the heat from being conducted away from it into the table. We also increased the ironing time to 10 minutes at 300 degrees F.

Before peeling the film, we took care to push out percieved bubbles with a bone folder. A few bubbles were able to be manipulated off the plate. The film was not peeled off in one go as in previous trials. In select places where bubbles were too pervasive to be treated with the bone folder, the film was gently peeled off, replaced and reheated for about 2 minutes at 300 degrees F. A cover sheet of newsprint was still used in this trial as in all previous trials.

Evalutation: Mostly successful transfer! The film was compliant to re-stick to plateÂ  after it was lifted and reflattened to address the bubbly areas.

Plate 13- The application of the film to the plate was manipulated most in this trial. It was flattened with a bone folder and ironed in several sections rather than in one swoop. Once the film was heated flat, about 1 minute per section at 300 degrees F, we moved to the next section. After the film was adequately placed, we ironed it for 10 minutes WITHOUT a newsprint cover sheet.

Evaluation: The transfer success was mixed; it was more successful overall than previous trials but the ironing method was too aggressive and caused the backing of the plate (contact film) to melt to to newsprint placed under neath. Also, the overheated image burned the film into open areas that had not been printed on.

Plate 14- This time, the application mimicked plate 13 but lasted for 10 minutes. Sectioned ironing took place at 300 degrees F for one minute to complete all sections. The last 9 minutes were used to iron the overall image, once again without a newsprint cover sheet between the film and the iron.

Evalutation: Full image transfer! The backing did not melt this time, however, once again some open areas were burned onto the plate where there should not have been any image.

This trial completed our experiments with plate preparation manipulation, as it resulted in a complete, successful image transfer. As we saw no difference between the Brother and Canson printed images, we switched back to our Brother printed film as the Brother is what is immediately available here at Zea Mays Printmaking.

As before, we incrementally adhered the film to the plate, taking care to extract bubbles with a bone folder in each section. A phone book was used between the plate and the table to prevent heat conduction away from plate and allow some give for the slightly convex plate to accept the flexible film.

We began the timer at 8 minutes, giving 1 minute for sticking the film section by section and the remaining 7 minutes for overall plate ironing. Iron temp was once again 300 degrees F. No cover sheet was used. 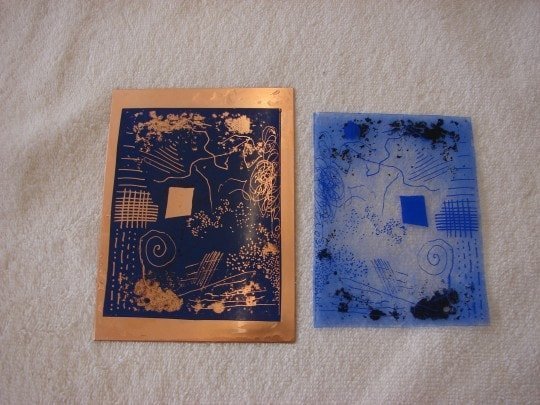 Plate 5 next to peeled PCB film. Note the spots where bubbles impeded transfer, and the hazy blue areas on edges of film where uneven distribution of heat left printed film behind. 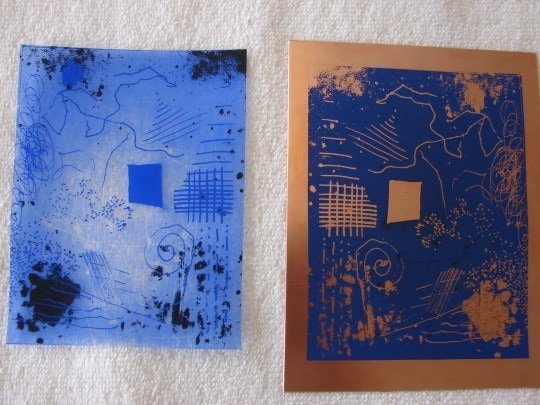 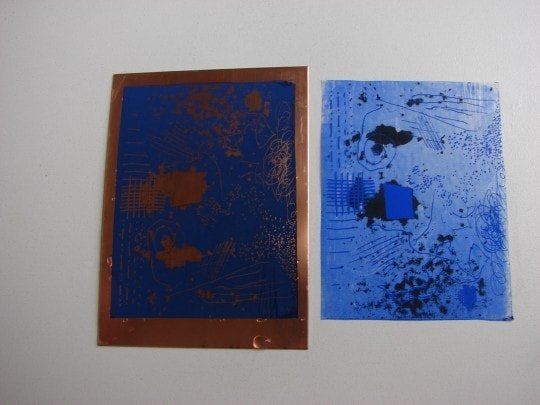 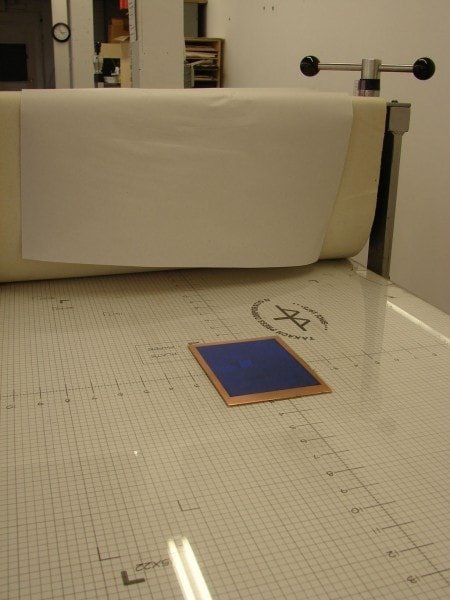 Plate 7 on the Takasch press 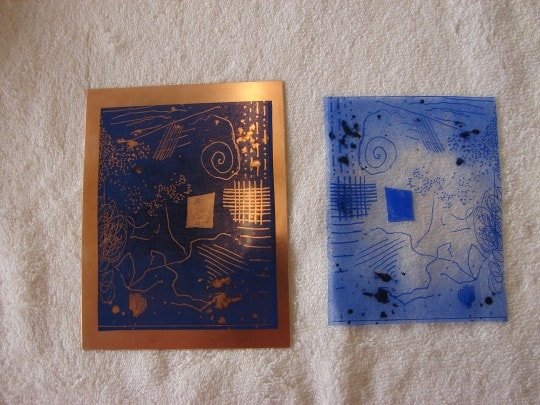 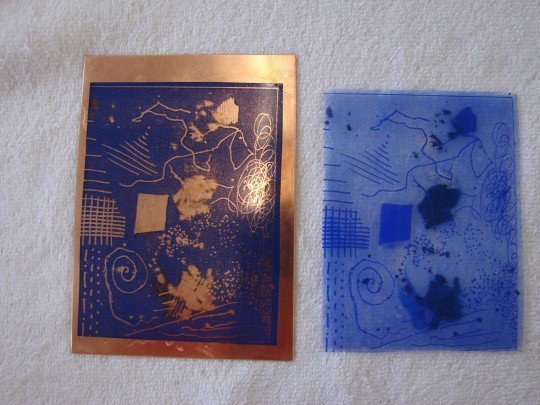 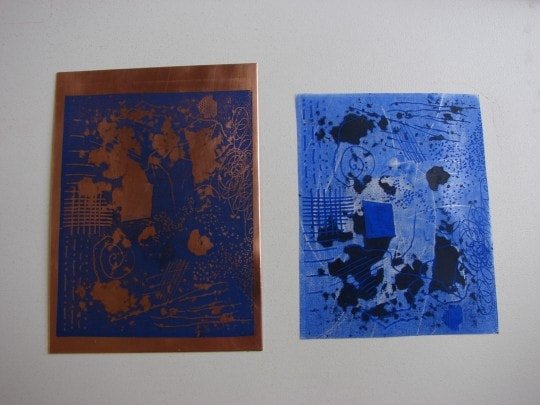 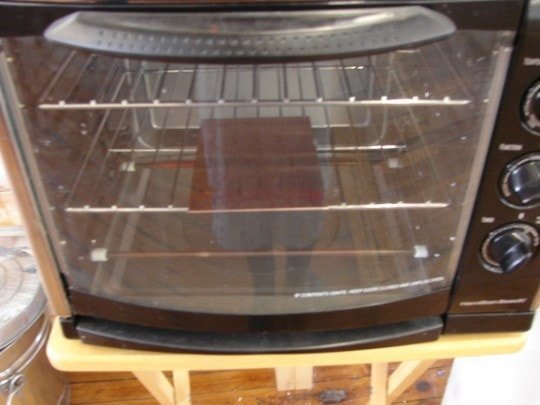 Plate 10 in the oven 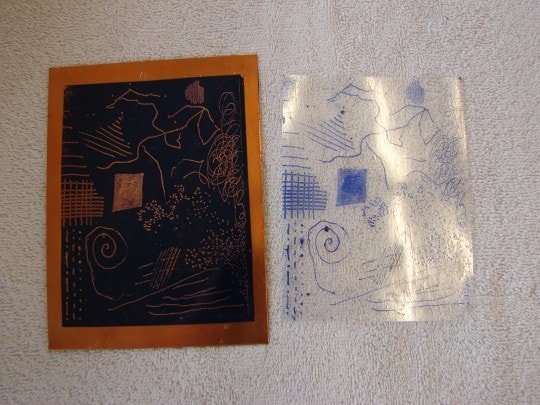 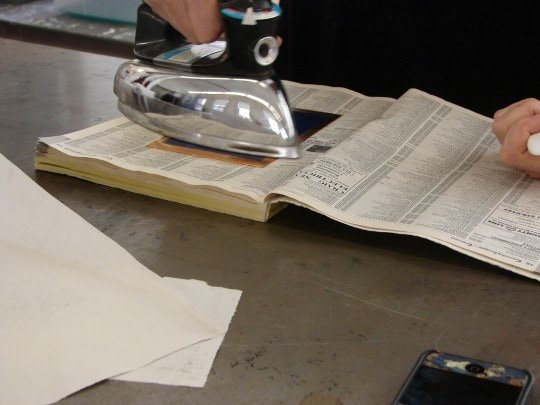 Ironing plate 12 on top of a phonebook 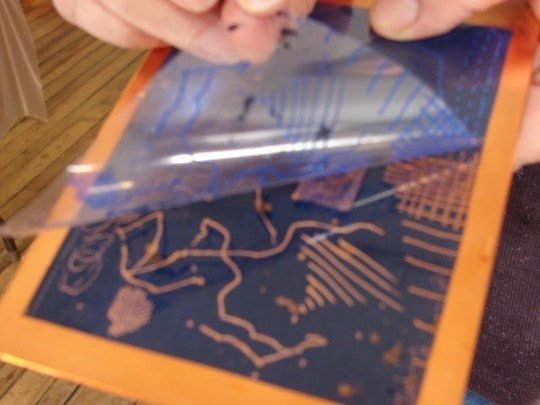 Peeling back of film on plate 12 to assess areas for re-ironing. Note the black spots on the film where printed areas did not transfer due to bubbling. 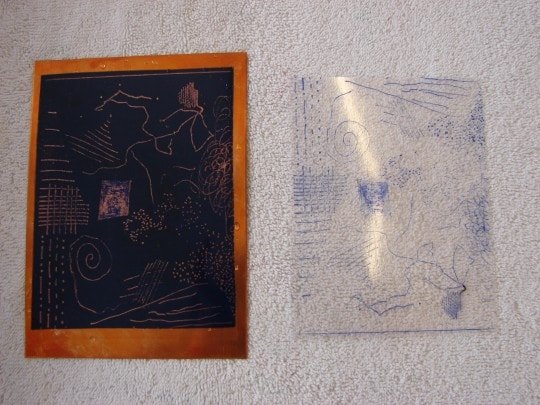 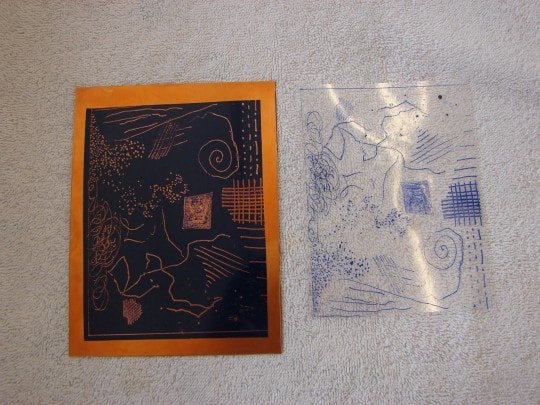 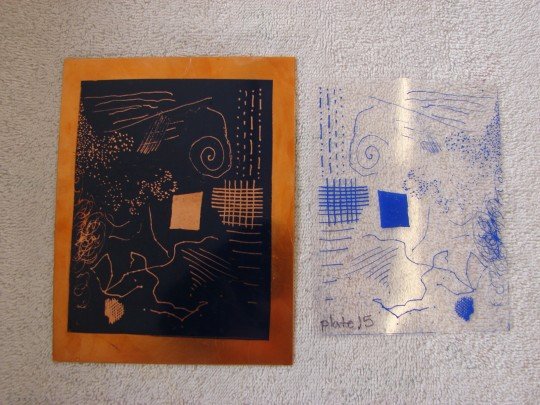 Etching Notes
Plate 15 was the only plate etched and printed during these trials. It was etched in a bath of 40 degrees Baume ferric chloride for 30 minutes.

Removal of Grounds
The ironed Press-N-Peel film was removed with a #00 Steel Wool pad, water, and Bon Ami all-purpose cleaner moved in a vigorous circular motion across the plate. This process takes about 15-20 minutes to complete for each plate. 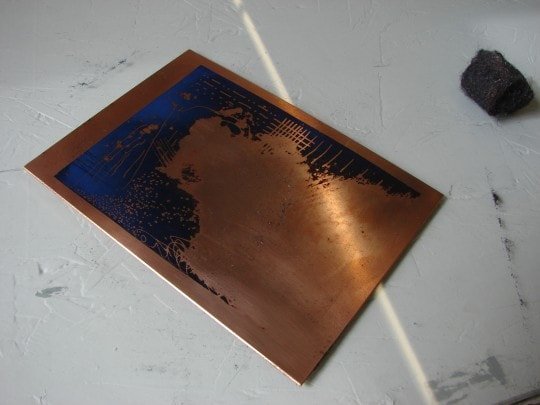 After Bath Evaluation
Successful etch, in that there was no foul biting. The film on the plate stayed intact and the image retained its complete integrity. 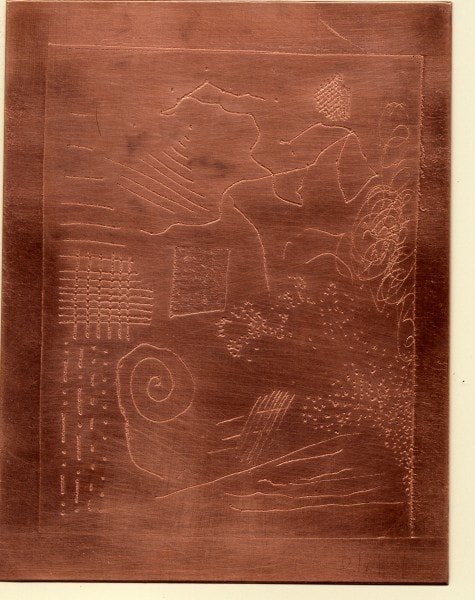 Inking Methods
The plate was inked with Graphic Chemical Bone Black Etching Ink No 514C. It was spread onto the plate with a piece of mat board. The ink was wiped off the surface of the place with a large piece of tarletan.

Test Conclusion
As stated in the summary, the thickness of the copper used in intaglio printmaking is about 23 times greater than that used for circuit boards. The actual amount of copper on a circuit board is about 0.00137″ thickness spread out onto a piece of backing. The thickness of the copper plates we used for our intaglio purposes are 0.032″. This variance in thickness meant that heating requirements were different to achieve a successful transfer of the printed film to the plate. In the end, our most successful method was about 8 minutes of ironing time, including the folding out of bubbles–compare to the 4 minutes for usual circuit boards, dictated by the Press-N-Peel creators at Techniks, Inc. This means that the ironing method must be more methodical, as the thicker pieces of copper we use have less give and require greater care to transfer the image evenly. This is where the phone book placed underneath the plate, along with the peeling and replacing of film to extract bubbles, came in. When ironing, the iron must have plenty of time along the edges of the plate as well as in the center, to ensure the edges are transferred without haziness.

FACTORS THAT DID NOT AFFECT TRANSFER: Degreasing method, oxidation, model of toner printer used to print image, using the press to adhere the film to the plate.

FACTORS THAT DID AFFECT TRANSFER: Duration of ironing, preheating of plate, conduction of heat away from plate, bubbles between plate and film. Stats for successful transfer: Iron set at 300 degrees F. 1 minute of heating film to plate by section, 7 minutes of overall ironing, 8 minutes total. Place phone book underneath plate to prevent the conduction of heat away from plate and to allow film to flex to plate more evenly. Use a bone folder or other flat edge to press out bubbles between film and plate, peel away and re-iron sections as necessary. 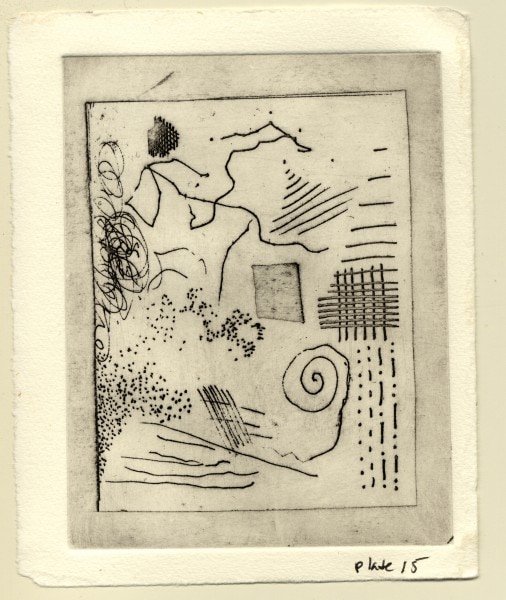