Test Summary
This trial built upon our earlier test and changed the values to the “Curves,” adjustment in Photoshop once again. The lighter colors were brought down to a darker color by this change, in hopes that the dot matrix eventually put down by the printer would be increased and result in more blocked off areas from the etch and thus become lighter.

Curves: We had the same black and white values from the previous test: Black= output 45 White= Output 225, Input 255. One middle point remained unchanged: Output 62/Input 64 (the gray-black), while the second was changed to be brought closer to the middle of the graph: Output 155/Input 175 (the gray-white). This gives the lighter grays a darker appearance in the inverted image, and the printer responds by putting more dots down on the film.

A grayscale from white to black was adjusted with the same above parameters to provide a clear, visual representation of our tonal range when subjected to such adjustments. It was printed alongside our original image (see below). 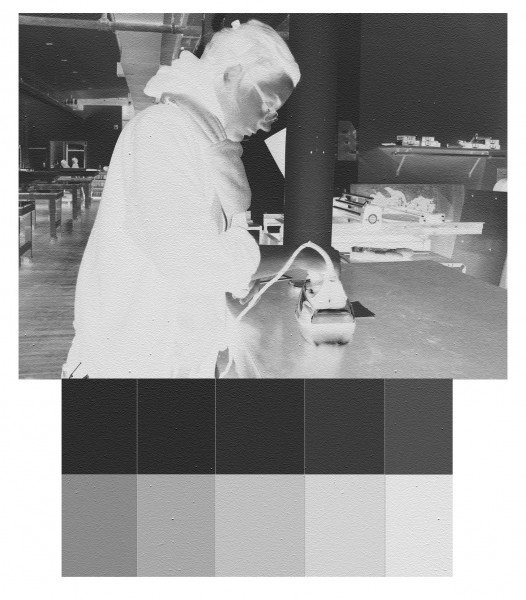 The Photoshopped image ready to print

After Bath Evaluation
Plate etched well. Some very small areas of slash marks where the middle grays would be.

Test Conclusion
The blacks are very nice, but ultimately the entire image is darker. White highlights were lost. Accompanying grayscale shows greater variation in the blacks, but loses this variation completely with the mid-to-light grays. Perhaps another, additional adjustment must be made to achieve the tonality we need. 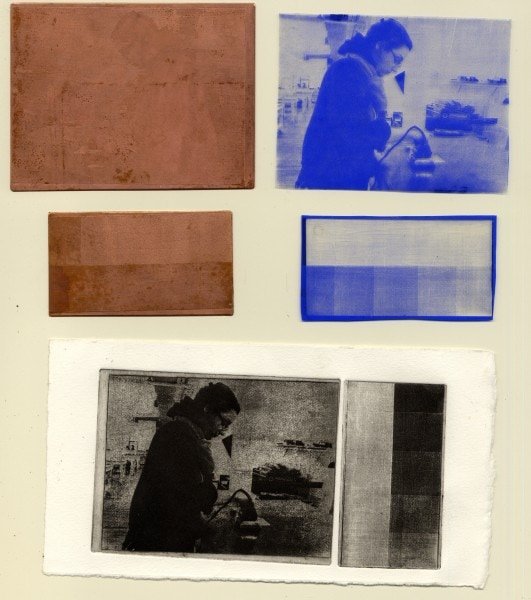