Test Summary
The purpose of this test was to see if the scaling of the aquatint filter had an effect on image quality. In other words, would the size of the grain of the filter–either larger or smaller–affect the smoothness of the image, and if so, is larger or smaller grain size best?

Plate Preparation
Two plates were used for this trial. The plates were beveled, polished with 00 grade steel wool, and degreased with 1:1 soy sauce: water ratio.

The image to be used was opened in Photoshop, then inverted under Image>Adjustments>Invert.

Under the “Curves” option, the values were bumped 5 degrees from the previous test: Black=40 White=230.

The independent variables here were the different scales of the aquatint filter. The image, with the above adjustments, was doubled to to copies; “A” and “B.” The scale for the filter can be as low as 50%, or as high as 200%. “A” contained an aquatint filter that was scaled at 66%, while “B” had a filter scaled at 136%.

Testers found that backing the plate with contact paper was most pragmatic AFTER the plate had been ironed and cooled. 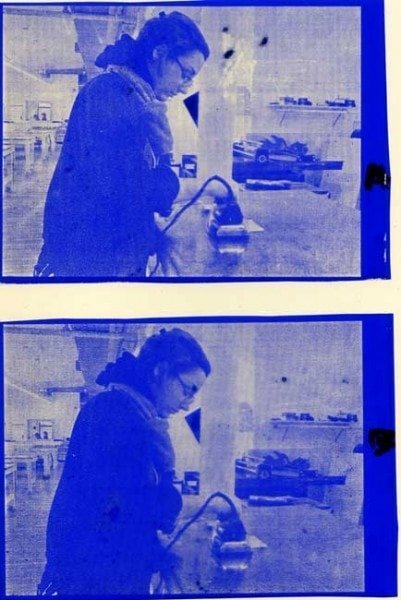 Etching Notes
The plate was etched in a 40 degrees Baume Ferric Chloride bath in a vertical tank.

Removal of Grounds
Plates were saturated with Soy Solv cleaner and left to soak for 5 minutes. Ground was then wiped off easily with a toothbrush and rag combination.

After Bath Evaluation
The plate etched effectively with no visible damage to the image quality.

Test Conclusion
Comparing the two proofs, it appears that a lower scaling percentage for the filter was most successful. Plate “A” had minimal speckling, or graininess, in the image, compared to the very spotty plate “B.” It also appears that most of the speckling occurs in the mid-tones of the image, signifying that more adjustments must be made in order to retain more consistent tonal variation. 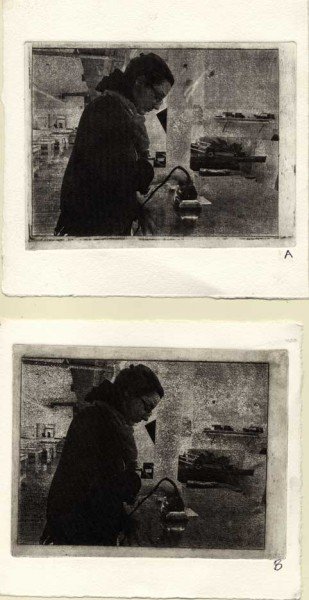