Test Summary
For this experiment, we built upon our last success with the aquatint screen and tested different values for the “Curves” option in Photoshop. We etched three versions of the same image, with all of the same Photoshop applications save for these “Curves” values. The intent was to gain a sense of which direction–and how far–to push the numbers coinciding with blacks and whites to get the best range possible.

Image was opened in Photoshop.The image was cropped to the area with most tonal variation, a 1″x 4.5″ strip on the left hand of the image. It was resized to 300 ppi.

The image was inverted under Image> Adjustments> Invert.

The channel mixer was opened under Image>Adjustments>Channel Mixer. In the Channel Mixer menu the “Monochrome” box was checked to give the image an appearance of black and white, even though it was technically still being profiled as RGB.

An aquatint screen was embedded in the image under Filter> Gallery> Texturizer> Load Filter. The settings for the screen are scaling: 104 and relief: 25.

Lastly, Curves were adjusted under Image> Adjustents> Curves. This image was copied into three images, so that differing values for the Curves adjustment could be observed:

Note: these are inverted, thus “White 240” actually is the black parts of the positive image. The 240 value was chose for the white after observing the dot pattern for that and other values through a loop.

In Channel Mixer the monochrome box is checked 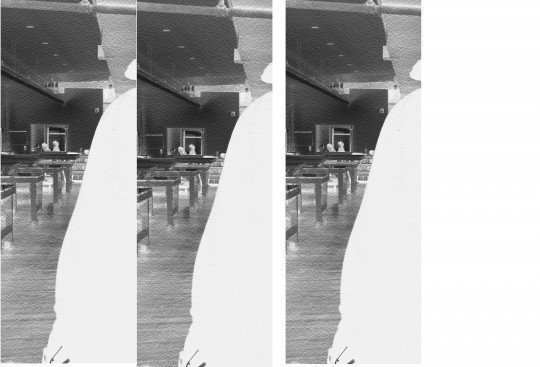 All three images with different curves values before printing on film

Removal of Grounds
Grounds were effectively removed with Soy Solv industrial cleaner, thus eliminating the chance that the scrubbing steel wool removal would distort or lighten the image in any way.

Test Conclusion
All three plates resulted in the clearest image with the largest tonal ranges we’ve captured so far. We are still in want of lighter whites. With the headway we’ve decided to try the full image with the adjustment to the color balancing. In an attempt to capture the whitest whites we will mirror finish the plates before degreasing in hopes of lightening the plate tone that appears.

All three plates with printed images and film