Test Summary
For this test, the images were prepared in Photoshop exactly the same as the previous test 9, however, with the difference being the dpi output for the printer. From the last test, it was concluded that image set at 600 dpi was more successful than the HQ 1200. Therefore, the next two plates show images at both 600 and 300 dpi. They are also inverted, a crucial step testers missed during the last trial that may have affected the outcome more than they thought. Plates are regarded as Plates 22C and 22D, as a Part II to Test 9 of Plates 22A and 22B.

A new adjustment layer was added and under Image>Adjustments>Levels, blacks were pushed to 73 and whites were placed at 197.

The image was inverted to a negative under Image>Adjustments>Invert.

The image is ready to print. As mentioned above, we placed different print parameters for the two plates to see if, in addition to the new Photoshop settings, a certain print profile was best suited for the image dot pattern.

Both images adhered to the following settings: under Image Size had the “resample image” box unchecked, resolution set at 300 ppi, and in the Print Preview dialoge box under “Print Profile” Gray Gamma 2 was selected. Color handling set at “Let Photoshop determine colors” and Rendering Intent set at Perceptual.

Plate C: Under “Print Settings” the media type was set at “Plain Paper” and Print Resolution set at 600 dpi.

Plate D: Under “Print Settings” the media type was set at “Plain Paper” and Print Resolution set at 300 dpi. 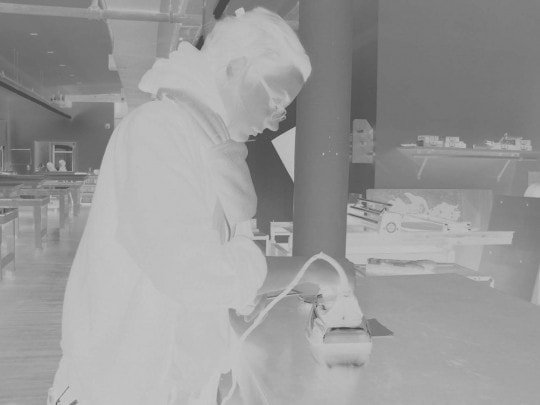 The Photoshopped image ready to print, and successfully inverted.

Removal of Grounds
Grounds were removed with 00 gauge steel wool.

After Bath Evaluation
Both plates were obviously well-etched, but both images still showed the harsh diagonal lines where it appeared the grays would be most delicate.

Test Conclusion
Both images have a better amount of detail than Test 9, but not more so than previous trials. Etching for 30 minutes may be too strong and perhaps could be eating the diagonals through the image where it is most delicate. 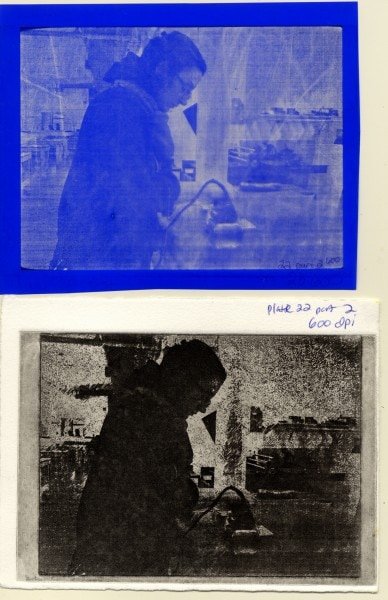 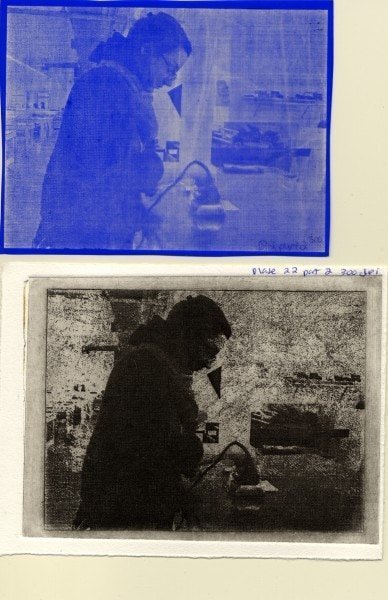