Press-n-Peel PCB Blue is used to lay down circuit board patterns on copper before it is etched. The traditional use for circuit boards involves printing a circuit board image onto the transfer film with a laser printer. The toner from the printer sticks to the film. The image is then positioned face down on a piece of copper and ironed. The film is peeled off leaving the film on the plate where the toner acted as an adhesive. The adhered film acts as a stop-out in ferric chloride. The plate is then placed in ferric chloride and etched. Once etched, the film is removed and the image is printed from the intaglio plate. It is a convenient alternative to standard photo-etching techniques without the use of UV exposure units and emulsions.

First, degrease the plates before application, to ensure proper adhesion of the image. After degreasing, rinse with hot water (to speed up water evaporation) and dry with clean newsprint.

Non-toxic degreasers/polishers:
-Soy Sauce
-Bon Ami mixed with water to form a paste (if a polish is needed) 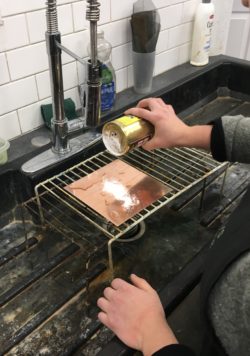 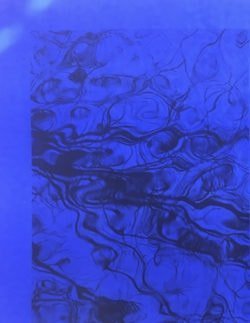 Cut two sides of the printed Press-n-Peel right to the edge of the image and leave about half an inch of extra room on the other two sides. Place the film printed-side down on the plate. The film must be as flat as possible for a successful transfer.

Iron the film with a standard tacking iron at 300 degrees F. Start ironing at one side of the film in a gentle up-down motion, while carefully keeping the opposite corner lifted. Be gentle but apply some pressure and slowly lower the corner as you move the iron towards the other side of the plate.

Iron for approximately 8 minutes on a smaller (under 7-inch plate) and 12 minutes on larger (over 7-inch plates). Adjust based on plate size and be aware that it will take longer than you may expect, be patient! Placing the plate on an open phone book helps keep the plate at a consistent temperature for a complete image transfer and to provide an insulating layer. 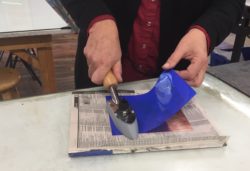 Keep ironing the film, smooth strokes, concentrating on moving from the center out to the edges of the film. As you work, the image will darken and become clearer through the film. Always keep the iron flat against the plate, moving using firm even pressure across the plate. Avoid air bubbles from getting trapped between the plate and the film, but know that if you do get them you can move them to a toner-free part of your image and avoid losing any information during the transfer.

Allow the plate to cool enough to be handled at the sink. Flood the plate with cool water. This will ensure that the toner of the printed image has completely cooled to your plate. Slowly and gently peel the film off of the plate and discard it. Dry your plate gently with newsprint immediately.

Back your plate with contact paper before this step. You may choose to apply a layer of aquatint over the entire plate at this point but it is optional. If you choose to add aquatint, below are some samples of different applications.

Applying aquatint to the plate after the Press n Peel film

Your plate is ready for etching, we use a 39 Baume Ferric Chloride bath. The Press n Peel left on the plate from the ironing will stop out the ferric. Leave plates in the bath for 30 minutes for darkest blacks.

We like to use Soy Solv II vegetable solvent to remove the film. Soak your plate for a few minutes and scrub lightly with a rag or toothbrush. Wipe and rinse clean with a rag and soapy water. 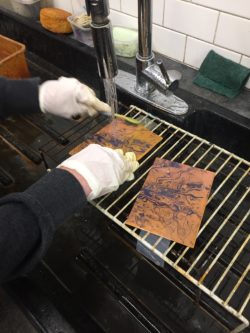 Creative expansions: more you can do with Press-n-Peel:

Digital manipulations in Photoshop before printing onto Press-n-Peel.

The plate can be manipulated again and again to the artist’s content. You can add lines and tones through :
Dry Point
Line etching – hard and soft ground
Engraving
Aquatint

Examples of Digital manipulations before printing onto Press-n-Peel:

Open a document in a TIFF file. Continuously opening and closing an image as a JPG loses pixels. The image must be relatively low ppi. 72 works well on a standard office laser printer; a nice printer at a copy shop can give you a finer, workable matrix at 300 ppi. If you are printing from home, you can adjust the closeness of dots later under printing options when you are ready to print. 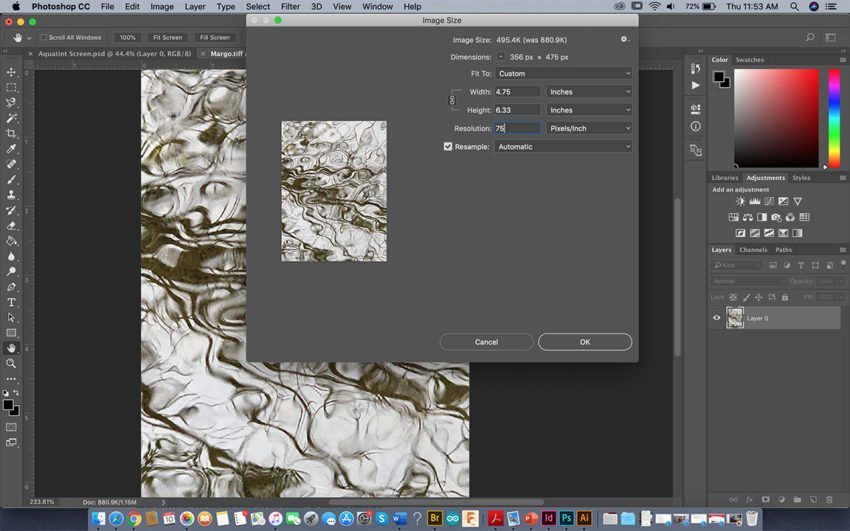 Make sure the image is read as black and white.  one way is to check the “monochrome” box in Photoshop Channel Mixer. This is helpful later to read your values correctly when you are adjusting levels. 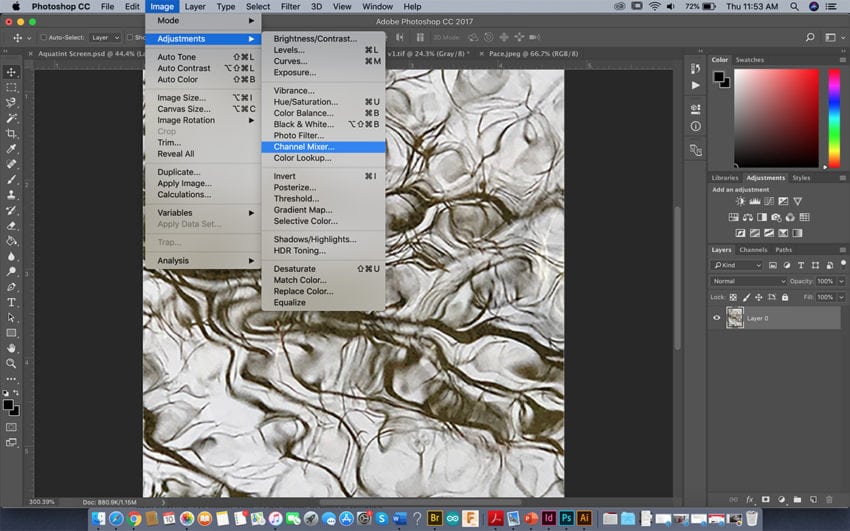 When in Channel Mixer we have had success changing the values of the Red and Green, (we used Red: 55 and Green: 45. Bring Blue to 0 as that channel is responsible for the most noise). The values of all channels must =100. 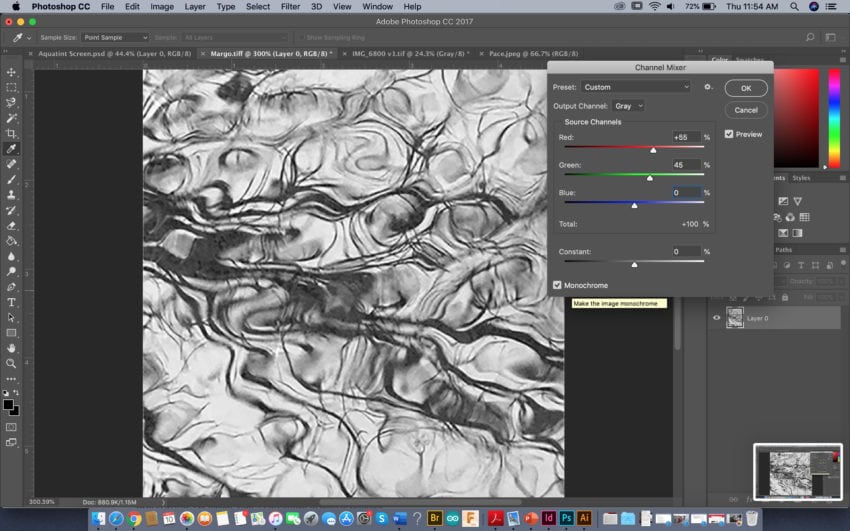 Invert your image by going to Image – Adjustments- Invert. Then bring the values down to a middle gray using Curves, Levels, or Selective color. Since you are working on an inverted “negative” of your image, make sure your whitest areas are completely black as to block-out the ferric. Your darks should be pushed inwards to a middle gray, so a dot matrix of varying distances between dots will give you variance of tone. All areas must have some sort of matrix, as an “open” spot will result in an open bite! 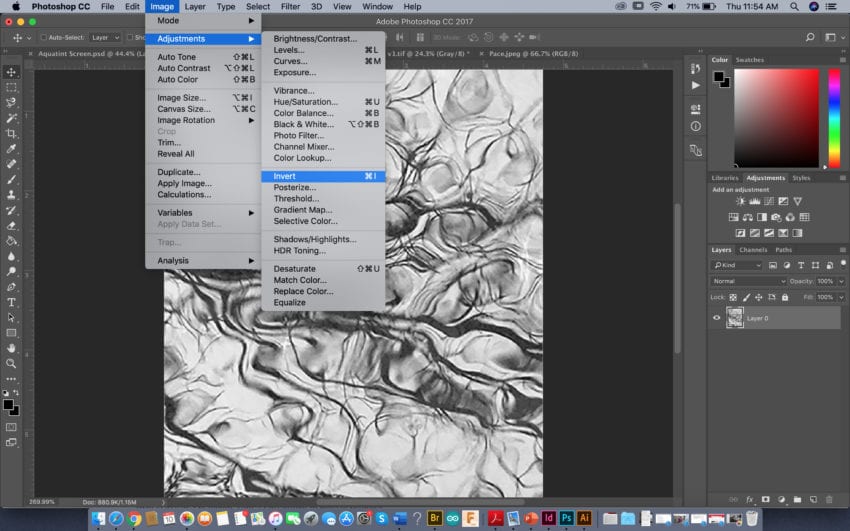 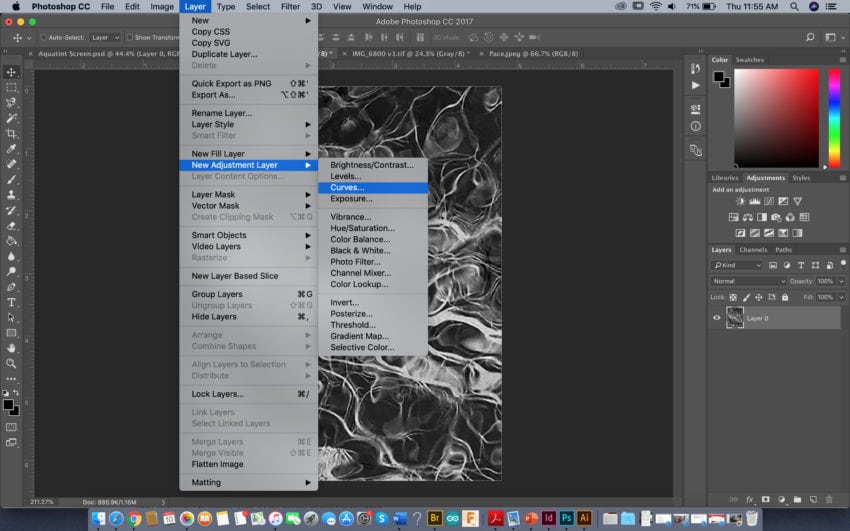 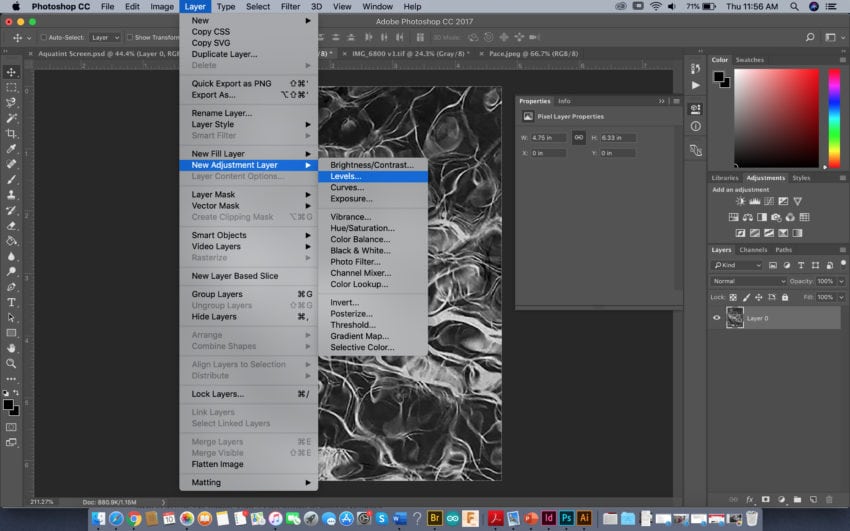 Many of our experiments employed the use of an aquatint screen, traditionally used in photopolymer intaglio, scanned at various ppi and used as a texture adjustment layer on the image. We’ve included a jpeg of an aquatint screen here (hyperlink) Save your scan as a .psd file (the lowest ppi you can use is 200) and upload it as a texture under Filter Gallery>Texturizer>Load Filter. 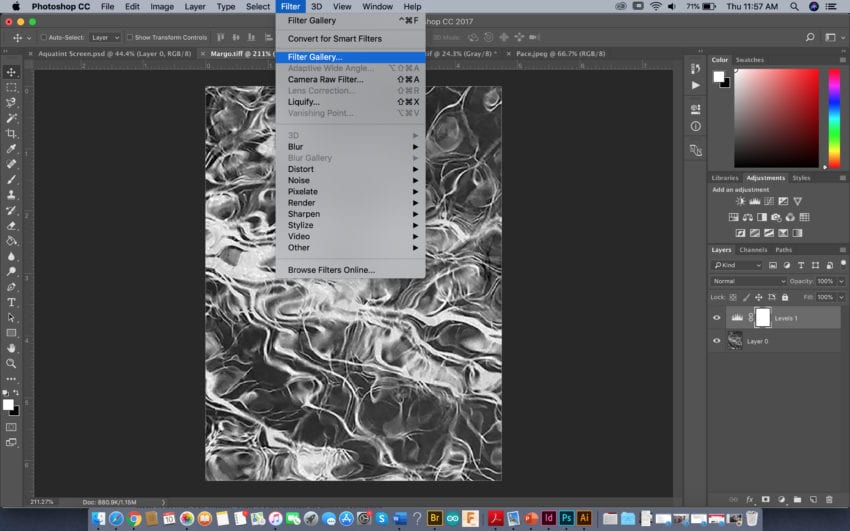 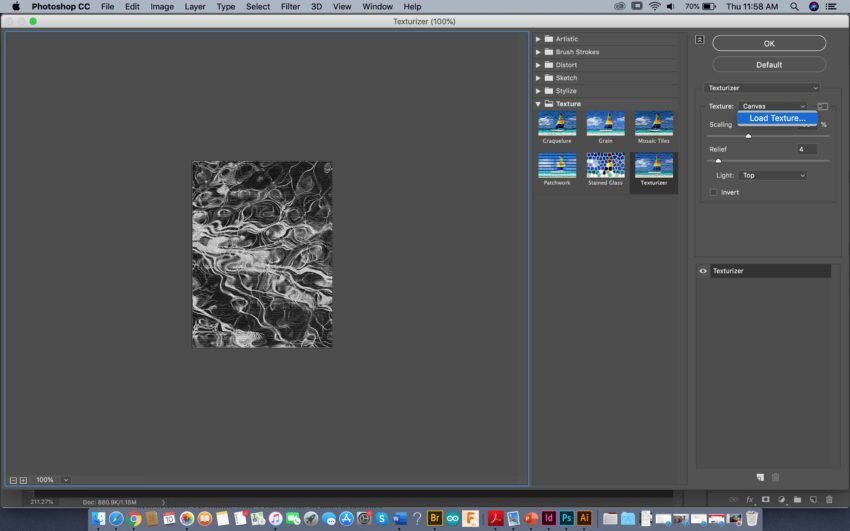 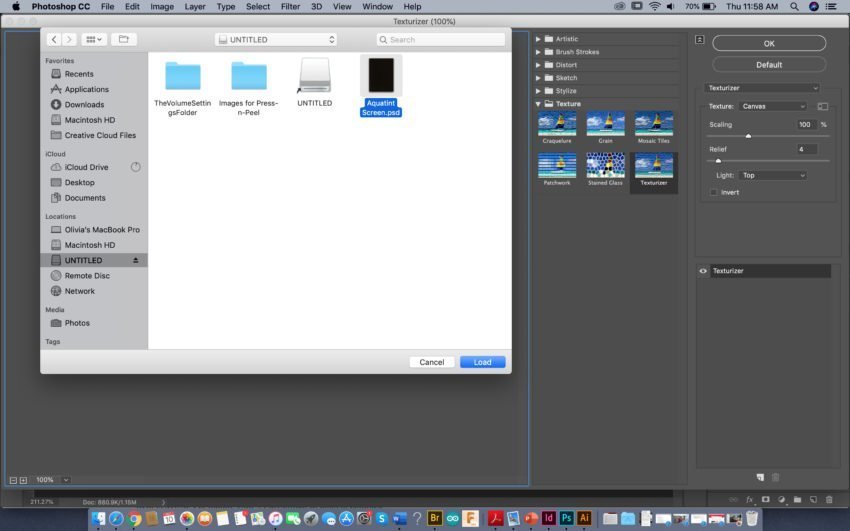 These steps are important as you are controlling the space between the dots laid down by the printer. The following is done on your at-home or office-grade lasers printer; you may or may not have control of these adjustments at a copy shop.

Dot-matrix shape must be “round,” under the print management screen

Check your lpi. The lpi (lines per inch) should be high enough to allow a smooth tonal transition, but not so high that it blocks out ferric completely. An lpi of 80-90 is fine, but no higher than 100. Lower lpi’s also work fine, but result in grainier images.

Check the resolution on your printer. Our printer is a standard brother HL228-ODW office model, not designed for fine art techniques. So we push the printing resolution to HQ 1200 as a sort of insurance policy to keep our dots a nice level of fine-ness. Nicer printers may need different adjustments.