Throwing Everything at the Wall and Seeing What Sticks

Last time we experimented with the different curve applied to the positive and we found that we could shift the tonal range but that we weren’t really expanding upon it. Lightening the darks in the image really made the whole thing too light, so we lost shadows and blew out the highlights. To move forward I decided to try out some drastic changes including an extra strength developer and a longer aquatint time.

The previous week we had mixed up a double strength solution of developer. It contained 25gm/L of sodium carbonate to water. For our batch I mixed up 100 grams in 4 liters of warm water and let it sit to stabilize for a week. The test plate preparation went the same as it did for the previous weeks test however I utilized the stronger developer. The developer temperature was 63.2°F. To reiterate the steps were as follows: Expose a laminated plate to the aquatint screen in the UV exposure unit for 5 light units. Remove the Aquatint screen and expose to the positive (I used the original positive we had made) for 5.8 L.U. Remove the protective mylar and develop for 9 minutes in the developer. Rinse and rub away the slimy residue for 30 seconds. Spray with vinegar and run for 30 second. Rinse again. Harden off the film in the sun. 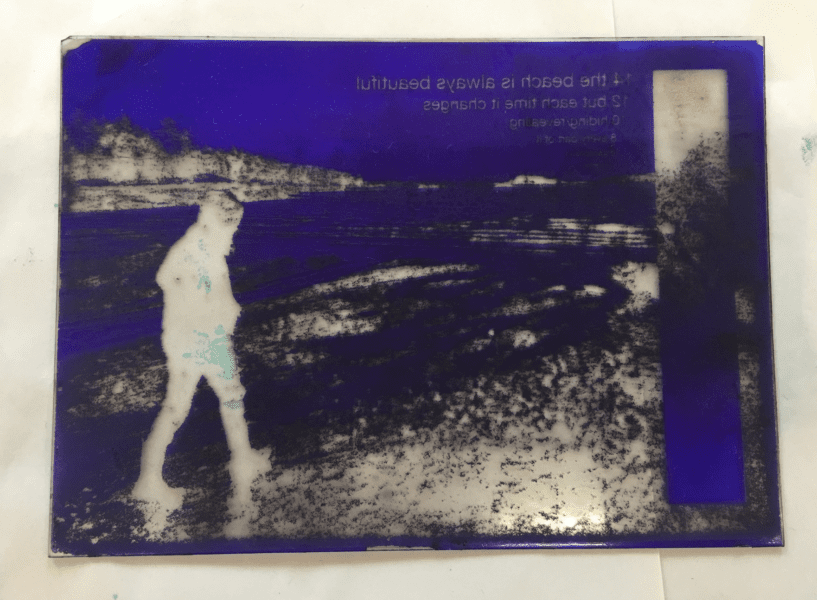 As you can see above the stronger developer dissolved the ImagOn film down to the plate any where there was going to be a deep black. Below you can see the resulting print. It is easy to tell by the value scale on the left that there is not only a lack of tonal gradation but also a failure of the integrity of the photopolymer film. 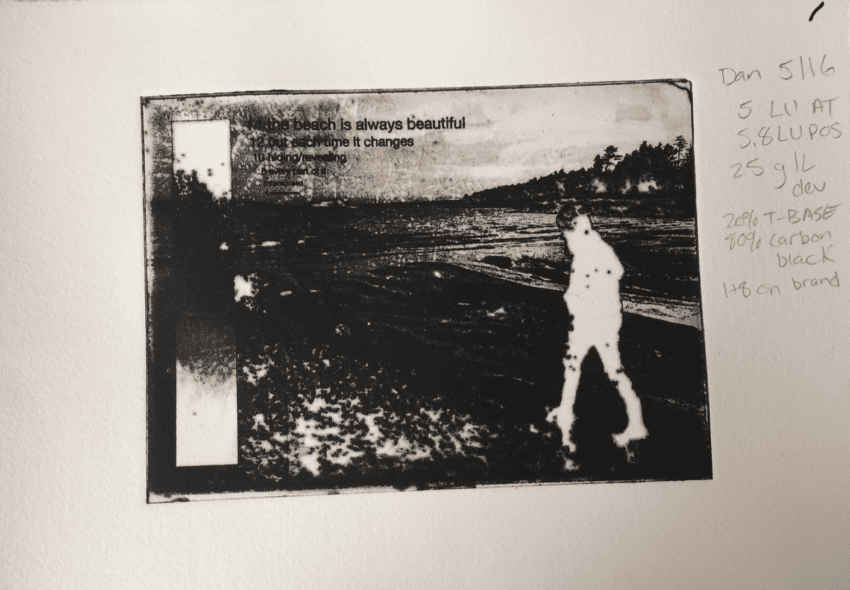 In our initial test of the aquatint exposure we were able to hold strong blacks up to 30 L.U. so I decided to move ahead and see how an image would look with an aquatint screen of a longer time. For this test I used the original positive that we had created as well as the 12gm/L developer solution. I exposed the aquatint for the 30 L.U. and then the positive for 5.8 L.U. The rest of the developing and printing process were the same as they have been. 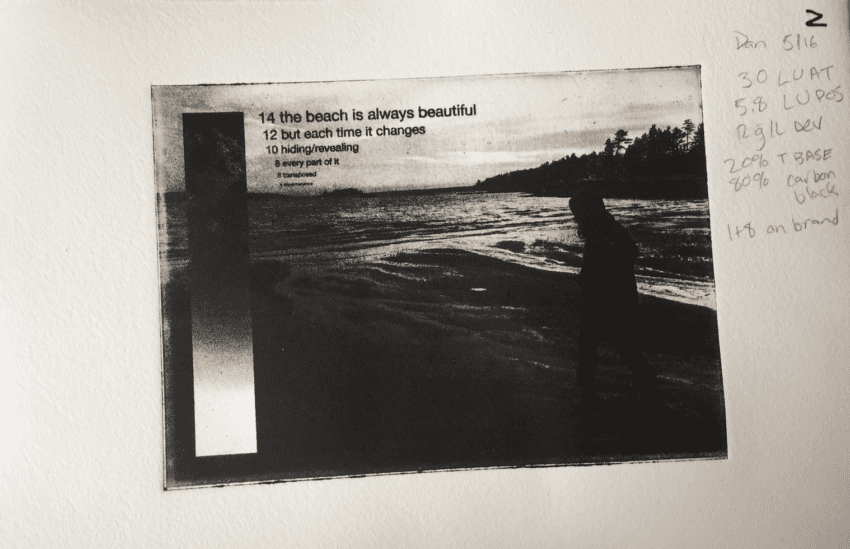 This test was a promising step forward. Allowing the aquatint to harden into the ImagOn for longer appeared to let the image have a wider tonal range while still not breaking down in the darkest areas.

Since lengthening the aquatint appeared to be helping to hold more tone I next decided to lengthen this time even more and to lengthen the time of the positive as well, hoping that this would compensate for the longer aquatint. For this test I exposed the aquatint screen for 50 L.U. and the positive for 21 L.U. All other parameters of the development and printing were kept the same. 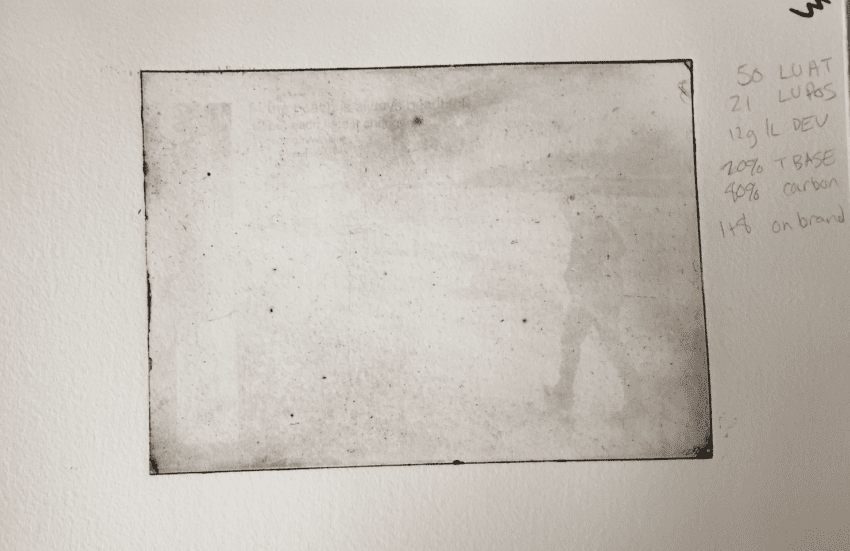 This test was far too long of an exposure on the positive. It hardened up almost all of the aquatint screen and made for an image that was almost all white with only the darkest areas appearing as a very light grey.

The next two tests were essentially step tests except on two separate plates. For these tests the aquatint screen was exposed at 30 L.U. and the only parameter that was changed was the exposure time for the Positives. Test #4 was done at 12 L.U. and test #5 was exposed at 8 L.U. 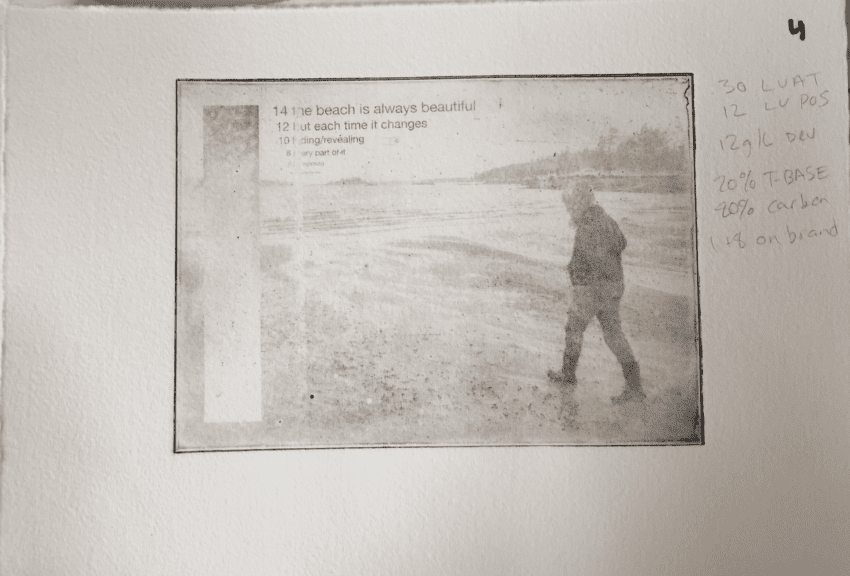 Here, in test #4 we see that the image is still way to light but not as light as the previous test. 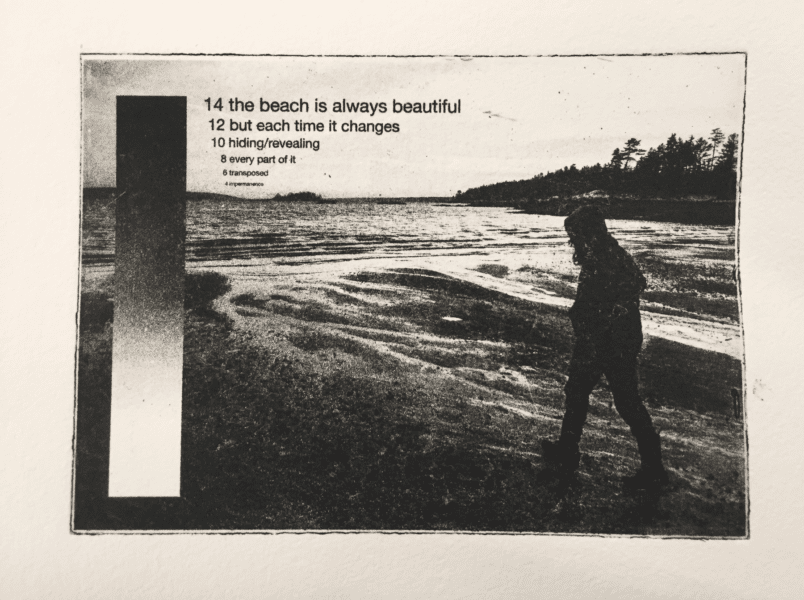 At test #5 the results are looking much more promising but we are still not getting the tonal range we’d like. The sky is blown out for the most parts and the darkest shadows are still too dark to differentiate any tonal variation.