We started off this week by testing out a new strength of developer before moving to testing the exposure of the plates with an aquatint screen and prepared negative. Although we did not get to the desired development rate with the new solution we decided to move forward and see if we were able to achieve an image with what we had. 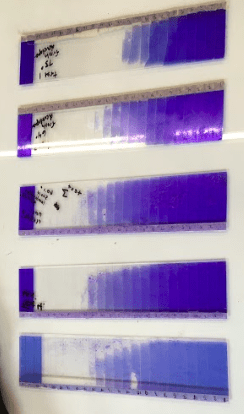 Here we can see the 5th test of the developer, with the more concentrated solution, appearing on bottom. The lighter color is simply due to the plate not being exposed fully to UV light yet. It does appear to be close to the last two tests, however it is evident that slightly more film is being dissolved.

Developer Bath Temperature: 64° F
Developer and plate both made April 11, 2019, one week before this test
ImagOn film completely gone at 16 minute mark, 10-20% left at 15 minute mark
Still getting residue when stopping out developer
Ideally we would continue testing the developer at different strengths and temperatures until we had a hard guideline as to what alters the rate of the developer. However, due to the confines of this internship we decided to move forward and see if we could still get an image to develop with the solution that we have.

For our first photo positive we used the predetermined settings for the black photo positives that have been used with the Toyobo plates here as Zea Mays. We made the photo grayscale, applied a tone curve, and printed on Pictorico film on an epson inkjet printer. 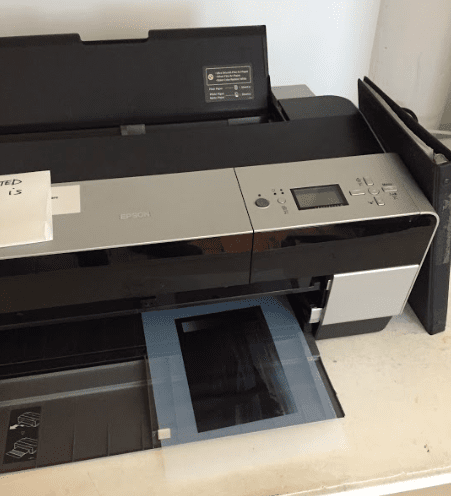 Our first test plate that was to be eventually printed was just the aquatint screen on a 5×7 PETG plate that we had laminated with ImagOn HD. With the shiny film still on the plate we place it film side up in the exposure unit. We then placed the aquatint screen on top of the plate, for pattern side down, and pulled a vacuum. In order to test what intensity of light we would need to achieve a rich black we covered most of the plate with black mat board and exposed for 5 Light Units at a time, moving the mat board over an inch or so each time. In the end we had a plate that had exposures ranging from 5 to 30 light units.

Next up we developed the plate in our 12gm soda ash per liter of water solution for 9 minutes. The developer bath was 62.2° F. At the end of the 9 minutes we removed the plate from the bath, quickly rinsed with water, then sprayed with white vinegar and rubbed gently for 30 seconds before rinsing yet again. We notice that the residue was present on this plate as it was with the other developer test plates. After the plate was developed we moved it outside into the sun to fully set. 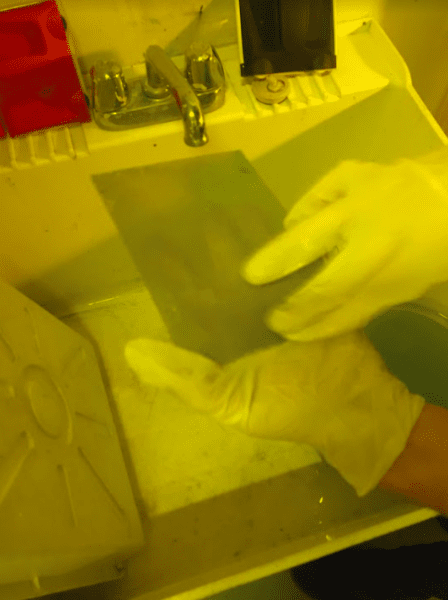 Here we are rinsing the plate, some accumulation can be seen as we run the vinegar into the film surface.

Printing this test plate was pretty straight forward. We made a damp pack of Hanemeuhle Copperplate paper and took some carbon black Akua ink from the jar. To ink the plate we carded the ink on with a small, hard plastic squeegee removed excess with the edge of the squeegee. The plate was wiped with a tarlatan and then wiped further with newsprint. The pressure was adjusted to leave a slight embossment on newsprint when a test piece of PETG was sent through with two sizing blankets. We placed the plate on the press bed, placed the paper, which was patted dry, on top and sent it through the press. The result was a uniformly rich black print. There was no sign of the different steps which we had exposed for which was slightly concerning but we decided to move ahead with that knowledge that we could get a decent black at only 5 LU’s. A ghost print from this plate revealed some of the texture left from the residue that had formed on the plate as it was stopped out with vinegar. 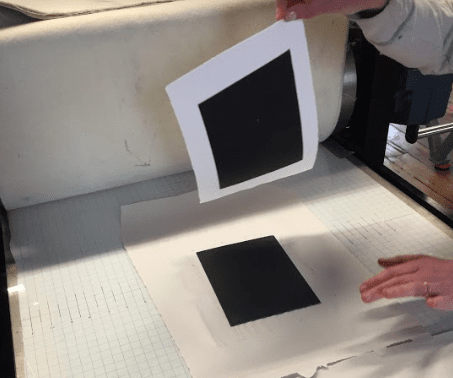 Testing the aquatint test plate we can see that a rich black is achieved throughout the entire tested range. 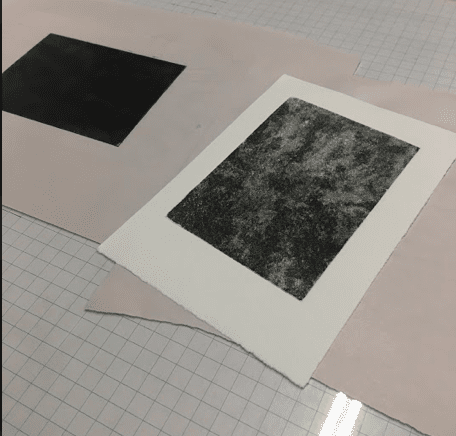 The ghost print of the aquatint plate reveals tonal variation as well as some of the residue leaving its influence on the image.

Preparing a Test Plate with an Image

After having some success with the aquatint plate we decided to try to expose an image to see if we could get any sort of result from that. We used a 5×7 PETG plate that was prepared that same as we had used for the aquatint plate. We did a 5 LU exposure with the aquatint screen and proceeded to do the same procedure (film side up plate, ink side of positive down, vacuum on) to expose the positive to the plate, on top of the aquatint layer. This was followed by the same 9 minute developer solution bath, then a rinse, vinegar spray and rub, and a final rinse. Like the aquatint test plate, we moved this plate into the sun to cure so it would be hard enough to print. 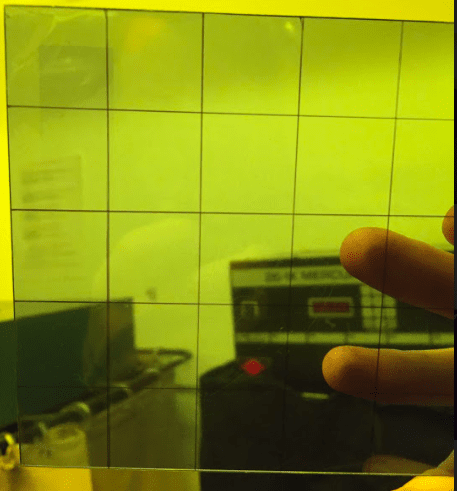 Before the plate was even developed we can see traces of the image appearing as darker spots in the film. 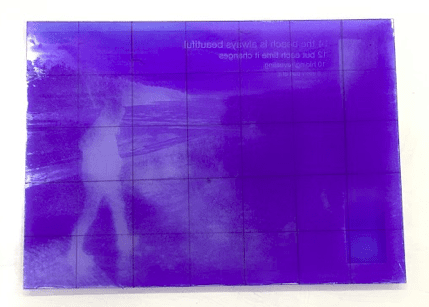 After being developed the image can clearly be seen in the plate.