After the previous weeks’ experiments we needed more testing to determine the strength of the developer and what other variables may contribute to developer timing. We also wanted to test if laminating plates ahead of use had any effect on the film’s adhesion to the substrate.

We began this day of experimentation by laminating a new test plate using the same spray method as last week and cutting the numbered strips in the same fashion. We also made sure to run both plates through the press, wrapped in black plastic film to protect them from light, to make sure we had as much adhesions to the substrate as possible. Using these two plates and the same developer that had been mixed up last week we moved forward with the same testing, removing the protective layer of film each minute for 22 minutes before stopping the developer out with white vinegar and exposing to sunlight to harden the film.

Developer Bath Temperature: 60.1°F
ImagOn Film completely gone at 16 minute mark, more than 80% left at 15 minute mark
n this test we notice a grainy, gunky texture appearing on the plate. It would show up as we were spraying the plate with vinegar to stop the developer progress and become increasingly hard to remove as we rinsed the plate. The same grime appeared during this test which we believed, at the time, may have come from the talcum powder of the latex gloves we were using to handle the materials.

Developer Bath Temperature: 60.4°F
ImagOn Film completely gone at 17 minutes mark, less than 5% left at the 15 minute mark
The same grime appeared during this test which we believed, at the time, may have come from the talcum powder of the latex gloves we were using to handle the materials. As the plate was exposed to the UV light of the sun it would harden into a rough surface. 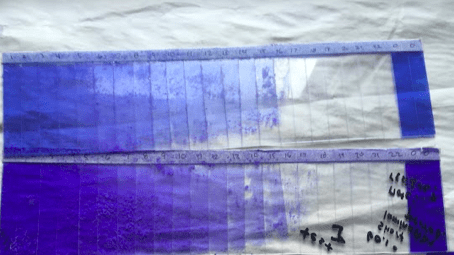 By this point in our testing we concluded that our developer was not strong enough as Keith Howard’s book ____ stated that a developed plate, developed in an adequate solution would have no film at 15 minutes and 80% gone by 13 minutes. We mixed up a solution of 48 grams of sodium carbonate to 4 liters of 108°F water and left it to sit until next week’s test. We tested the pH of the prepared developer to be 12. Our other conclusion, about when to laminate plates, convinced us that laminating the same day was acceptable practice as long as you ran the plate through the press to ensure adhesion. We also believe that shaking the developer before pouring it into the shallow photo tray is an important step.