To start experimenting with ImagOn HD, we needed first to mix and test our developer. This meant mixing developer, and laminating test plates with ImagOnHD.

We mixed together 40 grams of Arm & Hammer, Super Washing Soda also known as Sodium Carbonate with 1 liter of hot water from the electric kettle, and 3 Liters of warm tap water. We then mixed it all in a gallon jug. A test of the pH of the tap water before mixing soda carbonate was a pH of 7. 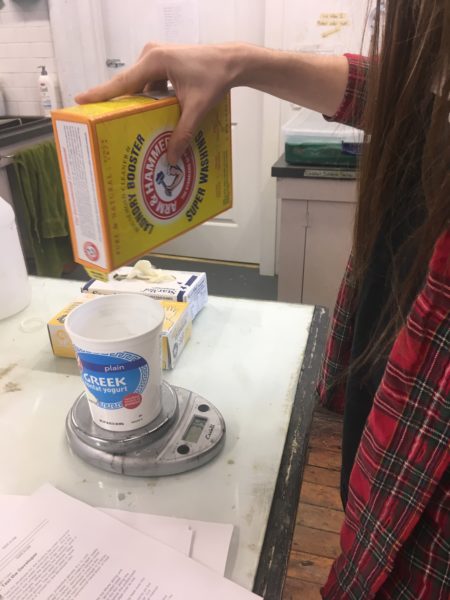 poring Sodium Carbonate to be weighed. 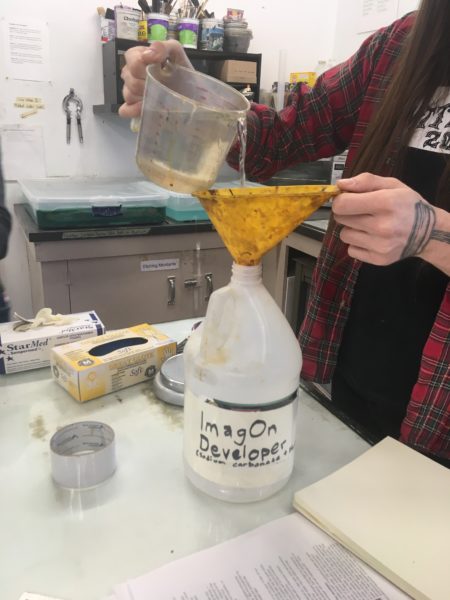 The method we chose to laminate our plates was the spray lamination as opposed to the float/bath lamination method, instructions for both we found in Keith Howard’s book The Contemporary Printmaker. We prepared three types of plates: aluminum, copper, and PETG. Copper and aluminum plates were cut with the plate cutter, beveled, and sanded with 600 grit sandpaper. The PETG did not require these steps. 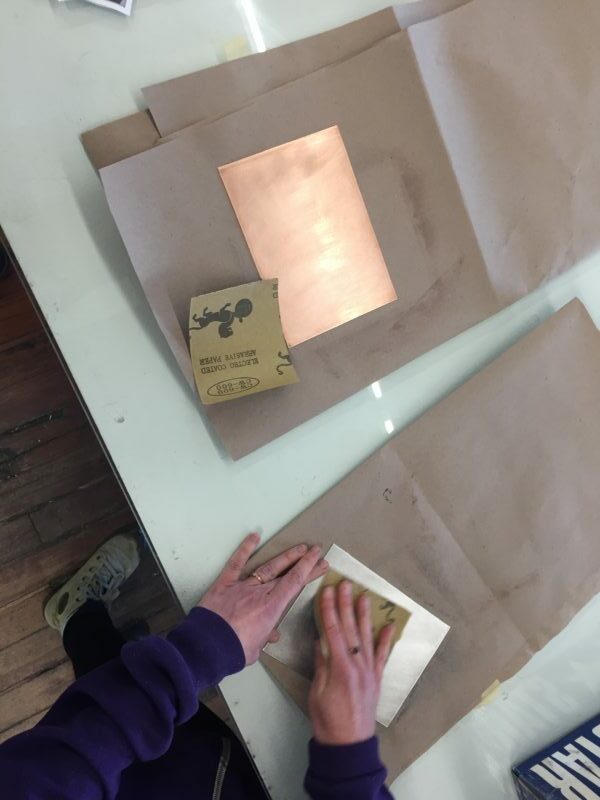 All of the plates were degreased with soapy water and dried with clean newsprint. Next in the process was to apply the ImagOn HD film to the plates, because the following steps involve using the light sensitive film they took place in our darkroom. First we cut the film to size, ideally with at least one half of an inch of extra film on each side of the plate. We next sprayed liberal amounts of water onto the clean and degreased plates. 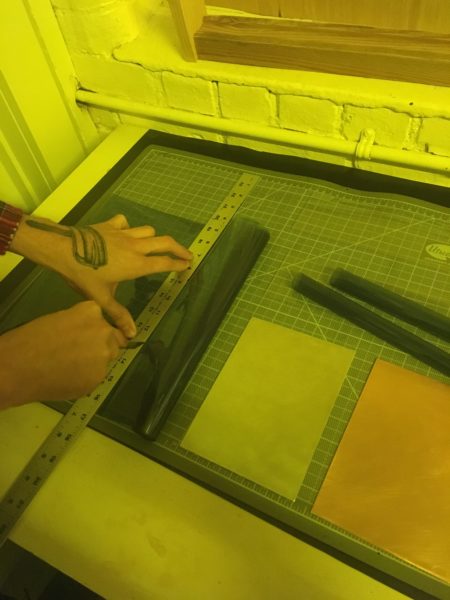 Before placing the film onto the plate you must remove the soft, matte underside of the film, this will be the side on the inside of the roll. To do this we rolled a piece of tape and placed it sticky side up on our work surface. We placed one corner of the film on the tape and quickly pulled back in a snapping motion to remove the matte film from that one corner. Once a corner was released we were able to carefully pull the rest of the film away. Once the soft clear film is off, we placed the ImagOn film that side down onto the wet plate. We next used our fingers, working from the center outward to remove air bubbles. Spraying the top layer of ImagOn film, to create less friction, we then used a hard, squared-edged Speedball squeegee and again working from the center out, pushed firmly to adhere the film to plate. We transferred the plate to a cutting surface, placed the ImagOn side down and trimmed the extra film from the plate. To reassure adhesion, for the copper and zinc plate we used a hairdryer for about 3 minutes. Because PETG is sensitive to heat, we devised a system of using a black trash bag to place the plate in to exclude light and ran the plate, ImagOn side down through the press. 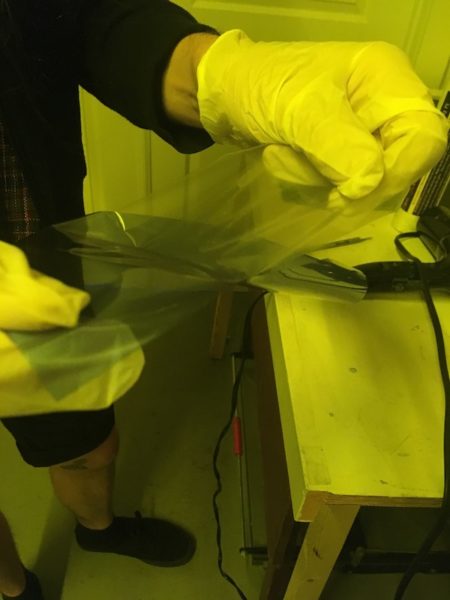 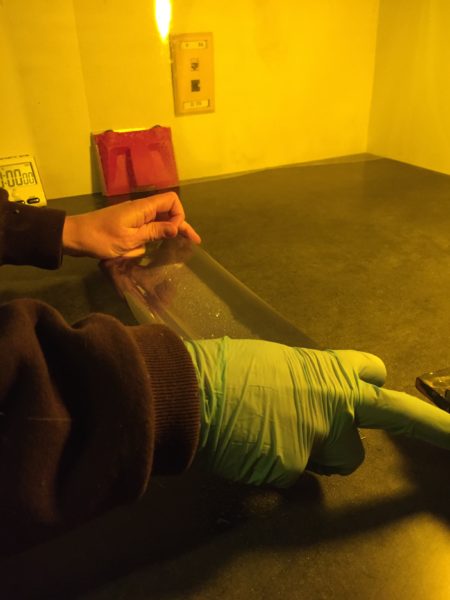 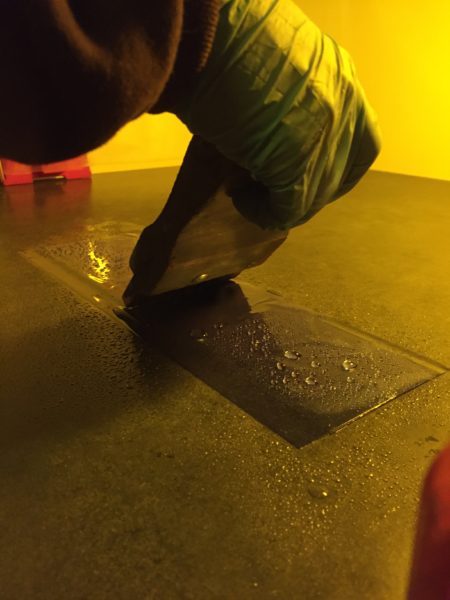 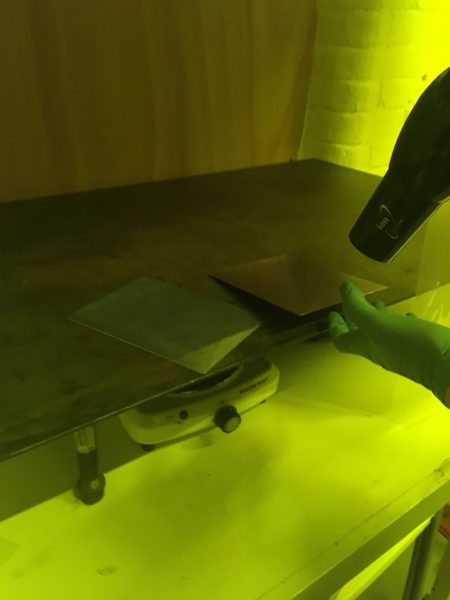 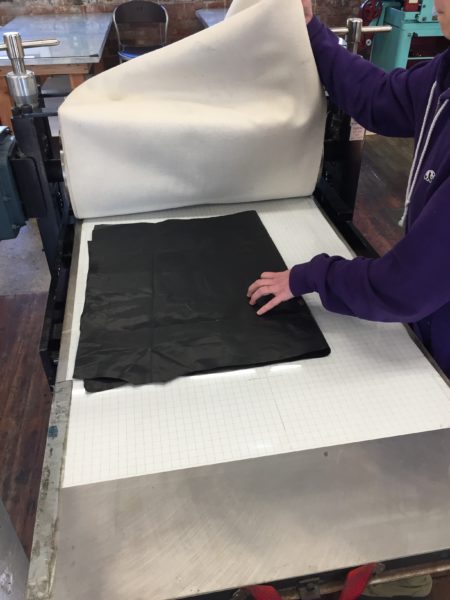 Because the pH of the water source can affect the strength of the developer, we used the developer test mentioned in Keith Howard’s book to test the strength of our developer. After preparing spray laminated 3in. x 12in. PETG plates, we pulled back the clear Mylar of the ImagOn film about 1/2 inch on the longest side of the plate. Carefully we placed masking tape along this side, and around to the back between the ImagOn film and the protective Mylar. Then, with the Mylar film still up, wrapped a piece of masking tape around the clear film. Next, we measured and marked with sharpie every 1/2 inch along the 12 inch side of the plate. We then labeled along the tape sequentially 1 through 22, and ending with 0. With an xacto blade we cut through the tape and Mylar creating 3in. x 1/2in tabs. 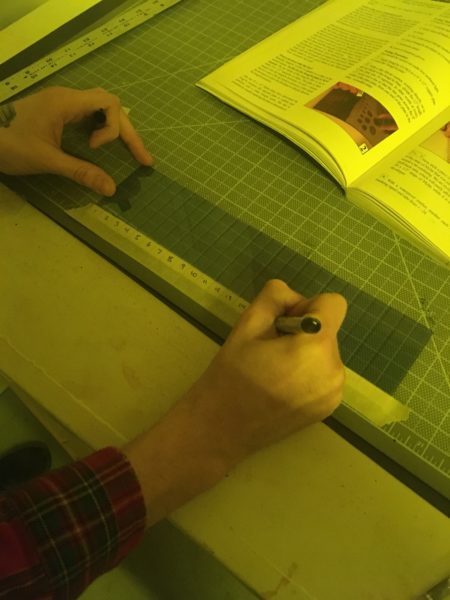 planning out the 1/2 tabs

Though this test should have only needed to be performed once, we actually needed to try it multiple times. Below are our first and second attempt. The third and fourth attempt were conducted on April 11, 2019.

For our first developer test, we used a batch of recently made developer and recently laminated plates. It is advised to laminate plates and make the developer a day before you want to develop. 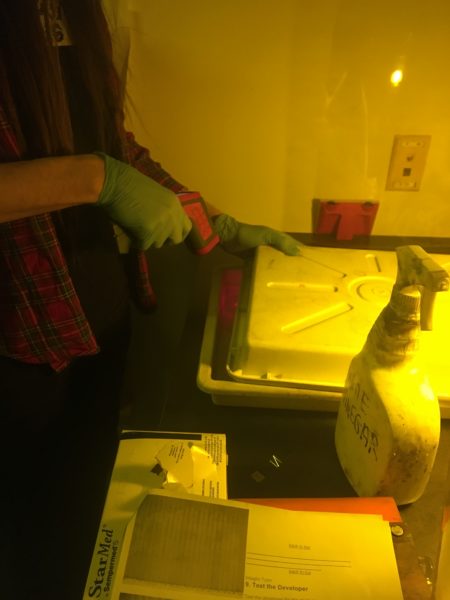 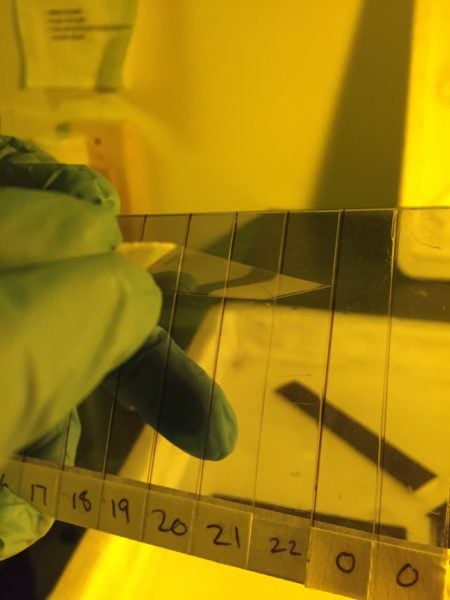 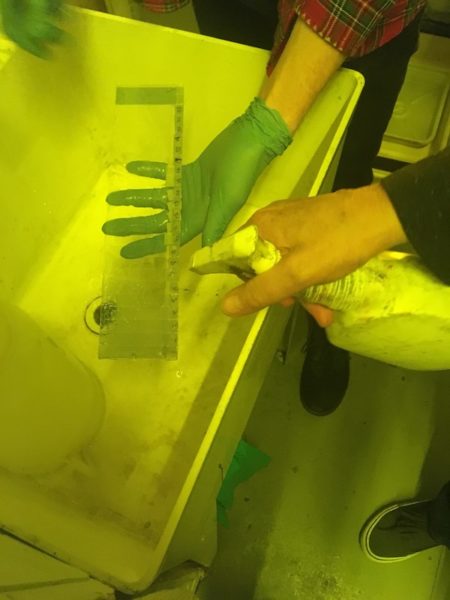 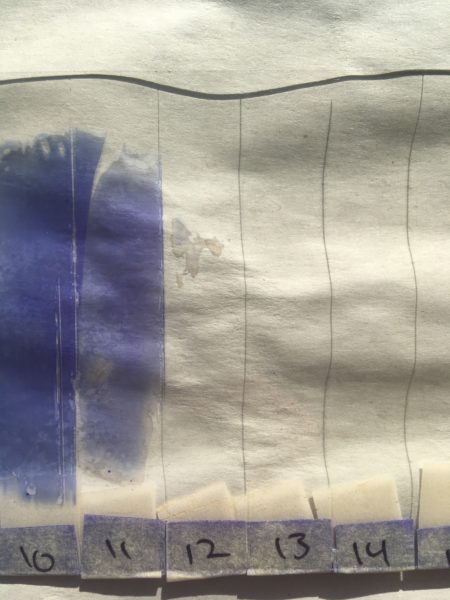 because we were supposed to see 80% of the film disappeared at the 13 minute mark, and the film completely gone at the 15 minute mark, we decided to run the developer test again.  For the next test we were curious to see if the temperature of the developer affected the processing time, and if it is important to shake the developer prior to developing. 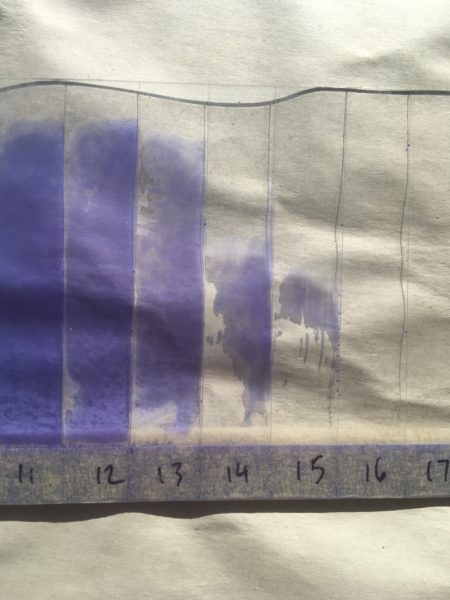 Because these results were still not what was expected we wanted to test again, this time investigating if letting the developer mature for a day would effect our results. 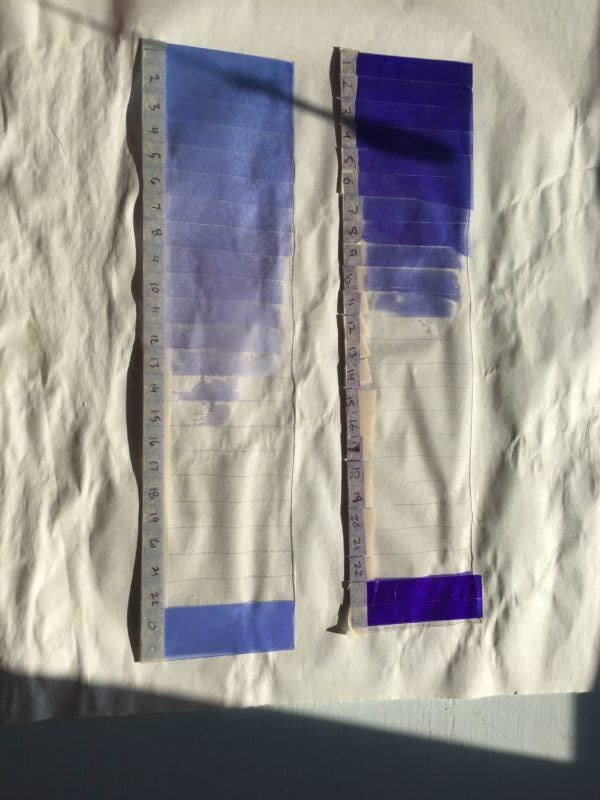