The (American) icing sugar was pre-sifted and set aside to create a faster, more even application. The pile of pre-sifted icing sugar was placed on the top of the mesh of a cake sifter. Sugar appeared much more coarse than the Tate & Lyle British sugar and was sticking to the mesh of the cake sifter due to the humidity. The plate was placed directly underneath as the sifter is shaken from side to side to allow the sugar to dust down onto the plate. A 4-inch, flat scraper was then used to move around the rest of the sugar on the mesh to allow it to fall onto plate. This was continued until the plate was completely covered in sugar and no red of the ground could be seen through the layer of white sugar on surface. The sugar was lumpy, sticky and falling in large particles down onto the grounded plate. Plate was left alone with heap of sugar for 5 minutes. Plate was then lifted vertically and tapped on it’s edge against the table to remove excess sugar. The appearance of the plate surface was coarse and very speckled. The plate was left alone flat on a table for 30 minutes to allow the sugar to dissolve into the ground.

Etching Notes
Plate was placed flat into a tray of ferric to etch for 10 minutes. While plate was in tray, acid was carefully sloshed from side to side to avoid having bubbles form on the surface which could result as a resist.

Removal of Grounds
The ground was removed with soy solve and a rag. Plate was placed in salt and vinegar bath and cleaned with degreaser spray before inking.

After Bath Evaluation
First application: After 10 minutes, the ground is still intact on the plate but it did come off as soon as it was rinsed under the faucet. Second application:

Inking Methods
For both proofs, the plate was inked using Graphic Chemical bone black. The ink was carded on with mat board scraps, wiped in gentle circular motions with used tarletan and palm wiped.

Test Conclusion
The proof is a smooth, even, light-to-medium grey. There are more white dots than etched, black dots. The plate was cleaned with veggie oil and soapy water to prepare for the next layer of aquatint. The plate was prepared identically to how it was done previously. The plate was degreased, grounded with BIG, pre-sifted (American) icing sugar was applied through sieve. The plate sat with sugar for 5 minutes, was tapped on all 4 edges and then sat again for 30 minutes. The plate baked in pre-heated oven set at 240 for 6 minutes and then sat for 1 hour to cool and harden. The plate is rinsed the same as before by using warm tap water in a tray and running it under faucet water. The plate is then blotted dry with newsprint, backed with contact paper and placed in a tray of ferric to etch for 10 minutes. The plate is then rinsed, dried and placed in the salt and vinegar bath. Using the same inking methods and press settings, the proof did not create a black tone as expected. The tone is slightly darker than the previous proof from the first application and there are some inconsistent marks creating swirl like patterns. 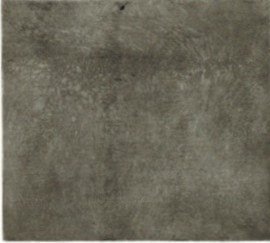